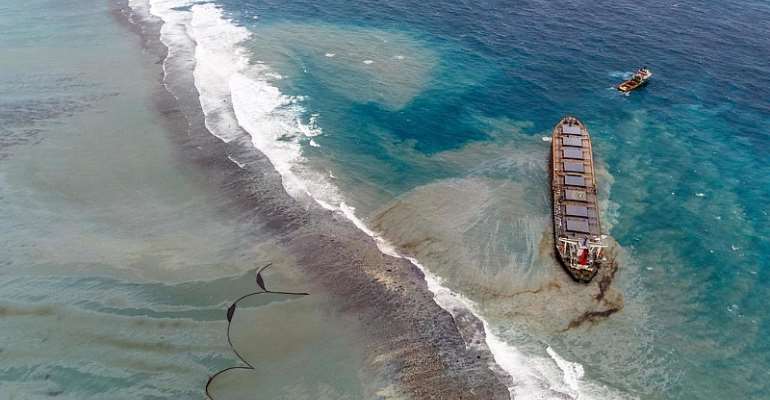 The ship responsible for an oil spill in Mauritius is likely to break into two, worsening what is already an unmitigated ecological and economic disaster. Indigenous species are at risk of becoming extinct. Locals' livelihoods are in danger. The island will take years to recover from the oil spill at Pointe d'Esny.

The population in Mauritius is oscillating between anger and despair. Anger because Mauritians feel that this catastrophe could have been avoided, and despair because of the extent of the damage.

Grown men are crying who can no longer recognise the place where they grew up. Many have lost their livelihoods. Some rare plants and species, endemic to Mauritius, are in danger of becoming extinct.

“The world is looking at us and the world is crying with us,” said Sébastien Sauvage, the spokesperson of Eco-Sud, a local environmental group.

Oceanographer Vassen Kauppaymuthoo recalls seeing only the eyes of a man entirely covered in thick, black oil sludge as he came back from the sea.

“The stench is unbearable and it is making us sick,” says local fisherman Baretta Matombe.

The oil spill started on 6 August when a fuel tank of the Wakashio bulk carrier cracked and oil started leaking into the clear turquoise lagoon.

This happened 12 days after the Panama-flagged but Japanese owned Wakashio freighter ran aground, on 25 July, damaging the coral reefs at Pointe d'Esny, on the south-east of the island.

It was travelling from China to Brazil, 200 km off course and heading well into the clearly marked waters of the Blue Bay Marine Park and the Pointe d'Esny wetland, two UNESCO Ramsar protected sites of international importance.

The ship was carrying 3,894 tons of fuel oil, 207 tons of marine gas oil and 90 tons of very heavy lubricating oil for machinery.

There is approximately 1,900 tons of oil left in the Wakashio to be pumped out, provided the ship does not break in two.

“We hope to be able to pump the whole remaining stock of fuel oil by Tuesday 11 August,” Environment minister, Kavy Ramano, told RFI.

“Should the weather pemit, we hope to end the operation with the boat on Wednesday.”

Kauppaymuthoo, who is also an environmental engineer, told RFI that the question is not so much 'if' the ship will break but 'when' it will break.

“The damage we are seeing now is nothing compared to what may happen when the Wakashio will break,” he said. “The whole east coast, from Blue Bay to Grand Gaube will be affected.”

Sauvage said that the population is preparing for the worst.

“We had a meeting with the experts from Reunion island who told us that we are looking at years of cleaning up that mess.”

He said that because the currents and the prevailing winds in the south east are very strong, it is important to deploy a buffer zone so that the oil spill does not reach the east and north east parts of Mauritius.

Over 5,000 Mauritians from all over the island have registered as volunteers with various NGOs to help with efforts to contain the oil spill. And another several thousand also spontaneously volunteered to clean up the polluted coastline without going through official channels.

“A huge wave of solidarity swept the island. People from everywhere joined forces to help and share resources. There is a tremendous wave of positive energy,” said Sauvage.

“Our diaspora in France, UK, Australia and elsewhere has also been very active in showing support.”

Eco-Sud as well as other local groups such as the Mauritian Wildlife Foundation and Small Step Matters, are taking donations and have also started crowdfunding platforms for the oil spill cleaning up operations.

Private companies have contributed to the salvage operations by providing transport, material, protective gear and their own workers. As it is sugar cane harvest season in Mauritius, the factories can give as much cane straw as needed to make floating booms which help contain the leaking oil.

According to the environment ministry, its workers with the help of volunteers have managed to remove “some 395 metric tons of fuel oil from the sea and some 90 tons of solid waste, oil sludges”.

Sauvage is worried about the health hazards of being exposed to the toxic pollutants.

“Our first concern is the health and safety of our people as we understand that there are many neurotoxic side-effects by breathing and being in contact with chemicals found in oil. So, our priority is to give them adequate protective equipment,” he said.

Minister Romano said that his ministry is providing protective gear to all the volunteers registered with them.

Six experts from Japan arrived in Mauritius on 11 August to assist with an unprecedented environmental emergency.

“I cannot find the words to express what I am going through,” 44-year old Baretta Matombe told RFI. “I am beyond being heartbroken.”

He knows the area polluted by the oil spill like the back of his hand and is spending his days at sea deploying hand-made floating booms.

“Even if we are completely demoralised, we will never give up and we'll get rid of the single last drop of oil from our sea.”

Motombe has been a fisherman, from Vieux-Grand-Port village, for the past 25 years.

“It's the end of us, fishermen, here. It may be years before we can start fishing again.”

Eco-Sud and other NGOs are most concerned about the lost livelihood of the people who live on the coast and they are already looking at developing alternative jobs for them.

The tourism industry, the pillar of the island's economy, already at a standstill for four months because of Covid-19 and closed borders, has now been dealt another serious blow.

“We are looking at thousands of jobs at stake on the east coast,” said Thierry Merven, CEO of Beau Vallon Group which owns Preskil Island Resort at Pointe d'Esny, not far from the Wakashio wreck.

“We have no idea when we will be able to start work again. What we know is that our activities will be considerably slowed down with major difficulties on how to resume work,” he told RFI.

Merven added that tourists are known to be reluctant to visit a place polluted by an oil spill.

“Our response needs to be constantly re-adjusted because of the movement of the tides and the wind.

“The experts told us that they need us because we know the area so well. We know the currents, we know how to access certain places,” comments Sauvage.

He said that the authorities now realise that they cannot beat this problem on their own. But this had not always been the case and created a certain amount of frustration as there was hardly any “interaction with the civil society”.

"But the Mauritian people did not wait for the government to immediately start taking actions."

Sauvage believes that the current situation is the result of a “series of unfortunate decisions by the government”. But he also admits that it is now “showing some good intentions”.

“We told them that we need complete transparency and I think that they heard us,” he added.

Kauppaymuthoo feels that the actions taken now come too late.

“Yet it could have been different. This why it is so sad,” he says.

“We should have started pumping the oil out as soon as the Wakashio ran aground and not wait nearly two weeks later, when the hull cracked, to do so.”

Matombe too does not understand why the government was so slow to react.

“The ministers came on TV and kept saying that everything is under control and that's where we are now, with an oil spill that could have been avoided,” he declares.

Minister Ramano explains that there was a due process to follow.

“Once a boat is wrecked, a salvage team is put in place by the insurance company under the supervision of a salvage master who replaces the captain and is the only authority on the boat,” he said.

Polyeco, a Greek company, was hired by the insurers to provide emergency spill response.

“The salvage team - Smit and Nippon Salvage - are the experts appointed by the insurers who provided us with the necessary good practices and they did not consider pumping the fuel,” added Ramano.

For Kauppaymuthoo, the government has been hiding behind hollow excuses.

“But this is a matter of environmental emergency. It is a national security issue,” he declares.

“What a disaster. How did we get to this point when we could have taken actions much sooner?”

Various groups in Mauritius are calling for a commission of inquiry into the matter.

“We need to understand everything that happened right at the beginning when the Coast Guards started contacting the captain of MV Wakashio on 25 July,” says Sauvage.

The opposition is calling for the environment minister and the minister of marine resources, Sudheer Maudhoo, to step down.