New lemur discovered in Madagascar, but already a threatened species 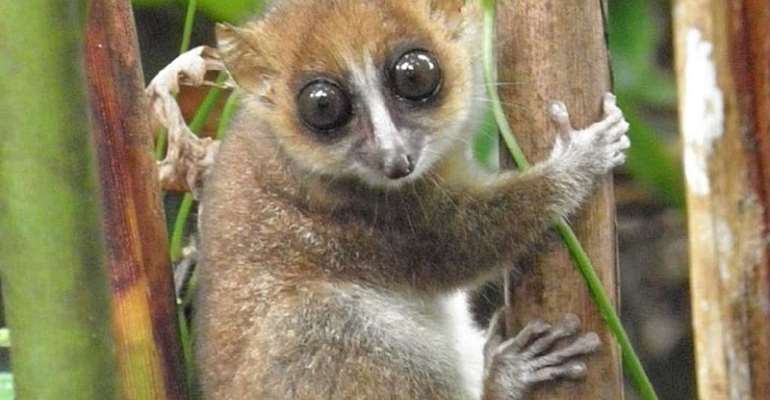 A new species of mouse lemurs has been discovered in north-eastern Madagascar. The Microcebus jonahi or Jonah's mouse lemur is the 112th species of lemurs. The primates are native to Madagascar and most of them are threatened with extinction.

The Microcebus jonahi or “Jonah's mouse lemur” is named in honour of Malagasy primatologist Professor Jonah Ratsimbazafy. He has dedicated his life's work to the conservation of Malagasy lemurs.

The American Journal of Primatology published the paper, on 27 July, with scientific details about this new Malagasy lemur. The “Jonah's mouse lemur” has small ears and the characteristic huge eyes of lemurs with a distinct white stripe between the eyes. It has short, dense fur with a “white with slightly yellowish nuances” belly and a brownish back. “Hands and feet show only sparse but whitish‐gray hair”.

It weighs around 60 grams with a body length of around 13 cm and its tail measures around 13 cm as well. The Microcebus jonahi may not look very different from lemurs but Professor Jonah Ratsimbazafy said that the main difference in the genetic pattern.

If the existence of “Jonah's mouse lemur” was made official two days ago in the scientific journal, it was nonetheless discovered in 2009 by the team at the Primate Study and Research Group (GERP), headed by Professor Ratsimbazafy.

It happened during a field trip in the North Mananara national park, on the northeastern coast of Madagascar, near Cap Masoala. It took over ten years to lay the scientific evidence that the lemur sighted was indeed a new species.

“We cannot, while conducting a scientific research, base our evidence on only two or three specimens,” Professor Ratsimbazafy told RFI's correspondent Sarah Tetaud.

The team of researchers in Madagascar spent time collecting data from a number of mouse lemurs, including blood and tissue samples.

“We pursued phylogenetic research, besides the genetic ones, to better understand the lineage of this lemur. And this is how we managed to show that the Microcebus jonahi was a completely new species,” Professor Ratsimbazafy added.

The primatologist is, however, much concerned about the fate of the new lemur. Although rather widespread across the island, mouse lemurs suffer from habitat loss due to ongoing deforestation and hunting.

According to the International Union for Conservation of Nature (IUCN) 2020 assessment, 33 lemur species are Critically Endangered (one step away from extinction), with 103 of the 107 surviving species threatened with extinction.

“Thirteen lemur species have been pushed to higher threat categories as a result of intensifying human pressures”, IUCN wrote, in July, in its updated Red List of Threatened Species.

Professor Ratsimbazafy told RFI that even if the Microcebus jonahi lemurs are currently a national parc, it does not necessarily mean that it will be protected.

He said the lemurs were found in a degraded rainforest site. “It's a longoza forest which is not the ideal habitat for lemurs as there are human settlements nearby”.

“What's the use of discovering a new species today when it will disappear tomorrow,” he added. “We need to do more research. This is how we managed to uncover this treasure. But it's already in danger.”

Professor Ratsimbazafy is now counting on working further on awareness and conservation programmes with the local population to ensure better protection of lemurs.