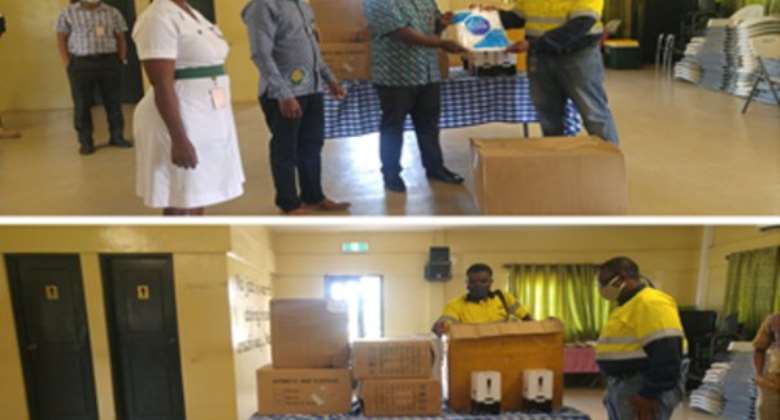 The beneficiary institutions are the New Abirem Government Hospital and the Birim Central Municipal Health Directorate.

The two health institutions in the Birim Central Municipality and the Birim North Districts of the Eastern Region.

Mr Joshua Mortoti, the General Manager of Newmont, Ghana- Akyem Mines, who handed the items to the beneficiaries said, the items were to be distributed to all health centers across the Birim Central Municipality and the Birim North District.

He said one-third of the items worth Gh¢ 56,000.00 donated would be given to the Birim Central Municipal Health Directorate for further distribution to hospitals within the municipality.

He said the health and safety of their workers and host communities remain the utmost priority of the company, hence the donation.

Mr Mortoti said Newmont was committed in doing their part to help strengthen the capabilities of public institutions to enable them to put in place measures to minimize the risks and impacts associated with COVID- 19.

He said the company has already donated at the national and district levels to help fight the corona virus.

He mentioned some interventions such as supporting the public health system with US$ 100,000 and allocation of US$ 20,000 to the Birim North District Assembly to help minimize the spread of the virus in the country.

Mr Mortoti urged the health institutions to put the items to good use and was hopeful it would go a long way to facilitate the work of the frontline workers in fighting the COVID-19 pandemic in the country.

Dr Atta- Larbi Sakyi, the Medical Superintendent of the New Abirem Government Hospital who received, the items on behalf of the health institution thanked Newmont Ghana for the gesture and called on other philanthropists to also come to their aid.