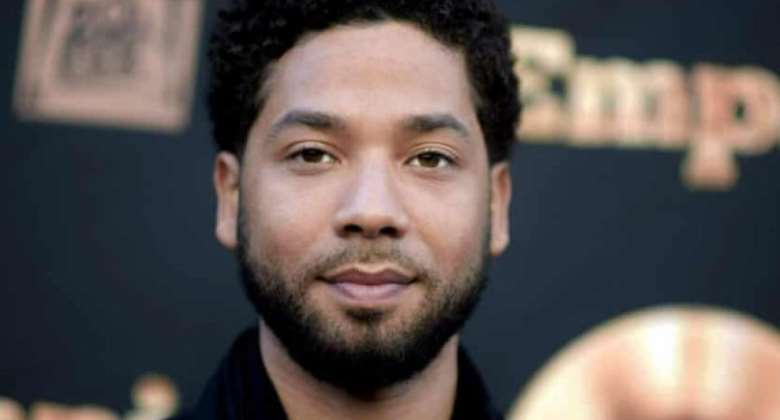 At first, when someone yelled out at actor Jussie Smollett on the street one frigid night in January 2019, he thought nothing of it.

All they shouted was the name of his show: Empire, Smollett testified Monday. That happened all the time.

Then, he told jurors, he heard more, including racial and homophobic slurs, he said. That got his attention and he turned around, infuriated, to see a hulking man in a ski mask coming toward him.

"He hits me right here," Smollett said, pointing to his eye. "I would like to think that I landed a punch but I know that I certainly threw one."

Over nearly six hours of testimony, Smollett — steady-voiced and calm — maintained that he had, in fact, been the victim of a hate crime attack, that he had not sought out any publicity for it, and that he never lied to police.

His testimony is the centerpiece of the defense case at his trial that entered its fifth day Monday. Later this week, jurors will be tasked with deciding a credibility contest: Who is more believable, Smollett, or the Osundairo brothers, who told prosecutors they helped Smollett fake an attack on himself?

Their verdict on six counts of falsely reporting a hate crime to police might hinge on Smollett's testimony, which is expected to continue Tuesday morning.

Even while recounting the most harrowing moments of the attack Monday, Smollett came off as measured and composed. He had been out in the middle of the night buying a meal at Subway after a long-delayed flight when he was attacked, he said.

In the chaos, he said, he heard someone yell "MAGA country (racial slur)," a reference to then-president Donald Trump's slogan. He fell to the ground with an assailant and tussled with him for awhile; after the attacker ran off, Smollett noticed a second man running in the same direction, he testified.

"It felt like something out of Looney Tune adventures... someone that felt massive just coming up to me, not enough time to even think," Smollett said.

It wasn't until Smollett was walking home that he noticed a makeshift noose around his neck, he said. Why didn't he notice it earlier?

"Because I was getting my ass whooped," he told jurors.

At the request of his attorney, Smollett got down from the witness stand and acted out for the jury how he remembers his attacker approaching.

Smollett said he didn't want to call the police because, "As a Black man in America, I don't trust the police, I'm sorry."

He also said that as an aspiring actor who wanted to be considered for masculine roles, he did not want to be viewed as the "(homophobic slur) who just got his ass beat."

Smollett said he was infuriated when his manager called the police instead.

Smollett faces six counts of felony disorderly conduct after allegedly staging a hoax hate-crime attack on himself and then lying to police about it. The trial is a culmination of almost three years of intense media attention and controversy surrounding the case, which became a national culture-war firestorm.

Smollett said that when the story blew up it in the media it was "complete chaos," including police leaks and misinformation that he'd reported his attackers were wearing pro-Trump hats.

"Everybody had something to say from the random troll to the president of the United States," he testified. "Everybody had their own idea of what the story was... they told me, you do (the Good Morning America interview), it's one and done."

Smollett said in the nearly three years since, his career has tanked. "I've lost my livelihood," he said.

On cross-examination, special prosecutor Dan Webb spent nearly an hour trying to pin down Smollett on why he refused to cooperate with certain aspects of the police investigation, including providing his cell phone, a DNA swab and medical records from his treatment after the attack.

Smollett said he agreed to give his DNA to the FBI after ex-Chicago Police Superintendent Eddie Johnson alleged that Smollett had sent himself a threatening letter to the Empire studios a week before the attack. "I knew that wasn't true," and the DNA test would be the only way to prove that, he said.

"Didn't you tell police you would cooperate 100 percent?" Webb asked.

"I told them I would cooperate," Smollett replied. "We didn't talk percentages."

Webb also questioned Smollett about whether he tried to tamper with the rope that his attackers put around his neck to make it look "more like a lynching," showing him a surveillance photo of Smollett after the attack and another from his apartment after police arrived.

Smollett denied it, and said in the later image it looked less like a noose, not more.

"There's no reason to make something look less like a noose if you're trying to get more attention for a supposed hoax," he said.

Earlier in his testimony, Smollett said he paid 3,500 dollars to a friend for a diet and exercise plan for him, not to arrange phony hate crime beating on himself.

The friend, Abimbola Osundairo, testified last week that Smollett texted in late January 2019 that he needed help "on the low," then gave the check to him and his brother with instructions to "fake" beat him up while yelling homophobic and racial slurs at him. Prosecutors have alleged Smollett staged the phony attack because the studio wasn't taking his security concerns seriously.

In his direct testimony Monday, however, Smollett told jurors that the text referenced some herbal steroids he wanted Osudairo to pick up for him during an upcoming trip to Nigeria, and the check was simply for a workout plan to get him in shape for the filming of an upcoming music video.

"There was no hoax," Smollett told jurors.

Smollett also testified about how important his face was to his career — indicating that he never would have purposely gotten his face messed up.

"My character was a superstar, a pop star, a beloved GQ whatever," he said. "It was very important that I looked like Black Cary Grant, not beat down."

Dressed in a dark gray suit and maroon tie, Smollett was sworn for his highly anticipated testimony just after noon Monday, and at first spoke so quietly that his attorney had to ask him to speak up.

After speaking to jurors about his family life and his history as an entertainer, Smollett's testimony focused on his time on Empire, and his relationship with Osundairo, one of the prosecution's key witnesses. Osundairo told jurors last week that Smollett recruited him to help orchestrate the phony hate-crime attack.

Smollett met Osundairo at a club during Season 4 of Empire; the two men then used cocaine and weed, and went to a bathhouse in Boystown together, where they did more drugs and made out, Smollett said.

"There was some touching," he said. At a separate bathhouse encounter, the two men made out again, and masturbated next to each other, he said.

Smollett's testimony could signal an attempt by the defense to suggest the brothers carried out the attack for reasons other than the alleged attempt by the actor to fake it and get the attention of leaders of his television show.

On the witness stand last week, Osundairo denied that he and Smollett had ever dated, and said he did not think there was sexual tension between the two men. Defense attorneys have also tried to paint Osundairo's older brother, Olabinjo, as a homophobe.

Smollett said Monday that he and Abimbola struck up a friendship; they would drive around smoking blunts as part of Smollett's creative process, and as a way to relax, he said.

Prosecutors have pointed to surveillance footage of Smollett allegedly driving around town with the Osundairos as evidence that they did a "dry run" before the hoax attack.

Regarding Olabinjo, Smollett said he "kind of creeped me out."

"I didn't even know his name," Smollett testified. "It was one of those, you see somebody too many times to ask them their name. I was just like, 'Hey brother.'"

As Smollett testified, his mother, five siblings, godmother and several other supporters crammed into the front row of the gallery.

Smollett began his testimony by walking jurors through his history as an entertainer, from his years as a working child actor to landing a starring role on Empire.

Speaking in a soft tone and smiling occasionally, he said he wrote to the show's creator Lee Daniels personally, and auditioned several times before snagging the role of Jamal Lyon.

"I'd never seen a gay man, let alone a gay Black man, portrayed that way," said Smollett, who is Black and gay, on the stand.

Smollett never had any problem with the Fox studio, and he started off on Empire making at least 25,000 dollars an episode, he testified — apparently an attempt by the defense to head off prosecution arguments that Smollett was dissatisfied with the way the studio treated him.

Among his lawyer's first questions was whether he grew up rich.

"Goodness, no," he answered.

The day's first witness was Anthony Moore, a security guard who was making the rounds in Streeterville in the early hours of January 29, 2019, the night of the attack.

He was near the Chicago Burger Company when he saw what appeared to be a white man in a ski mask coming towards him, he testified. He also saw a second person, but couldn't make out that person's face, he said. A third person was by the stairs on all fours "like he was looking for something," he said.

Through Moore's testimony, the defense hopes to corroborate Smollett's initial statements to police, in which he said his attackers appeared to be white. Defense attorneys have previously said they may argue a theory that the Osundairo brothers attacked Smollett with the help of accomplices who may have been white.

Almost a year after the attack, in January 2020, Moore was interviewed by special prosecutors and signed a statement that they typed up, he testified.

That statement, however, does not say he saw a white man. It states that Moore was possibly mistaken by the flashlight he shined into the man's face.

From the stand Monday, Moore said he felt pressured and threatened by prosecutors "to put something out there that I didn't see."

Defense attorneys also called to the stand Empire executive producer and showrunner Brett Mahoney, who testified about a threatening letter Smollett was sent. Prosecutors are expected to argue that Smollett orchestrated the hoax because he didn't think the studio was taking his safety seriously after receiving the note.

But, Mahoney said, they did in fact beef up security on set in response. And Smollett "didn't want a lot of attention around the letter," he testified.

Also Monday, prosecutors filed a petition for contempt against defense attorney Tamara Walker, arguing she violated an agreement to not speak to the media during the trial by making "inflammatory comments" to the Tribune about an incident during a sidebar hearing last week. Walker had claimed that Linn "lunged" at her after Smollett's defense team moved for a mistrial – an allegation Linn strenuously denied.

The petition focused on one comment from Walker in the Tribune story that what happened in Linn's courtroom was, in her view, part of a long pattern of disrespect toward female attorneys — particularly Black female attorneys — across the country.

Prosecutors said the comments violated a "Press Communication Agreement" entered into on November 24 where both sides agreed not communicate with the media until after a verdict. The agreement stopped short of a formal gag order.

The petition for contempt argued Walker's comments "undermined this court's authority, improperly tainted the public's perception of these proceedings, and jeopardized the fairness of this trial."

Linn had not ruled on the petition as of late Monday.