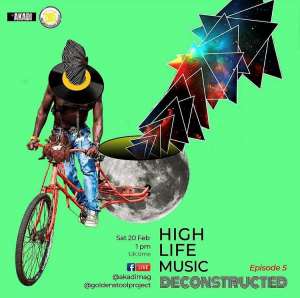 Five of Ghana’s contemporary Highlife musicians will be performing and discussing the future of the country’s iconic sound this Saturday (20th February 2021 at 1pm Ghana/UK time) on the Highlife Music Deconstructed (HMD) Series.

BiQo and Nee Mantse of Lala Sessions, Kyekyeku of the Opong Super Stars, Nyornuwofia Agorsor of the Agorsor, and music producer Kwame Yeboah, will provide their unique perspectives on contemporary Highlife music and why Ghana’s sound continues to have global appeal.

Each artist will perform tracks from their own work and speak to Highlife music expert and HMD Series co-host Bernard Johnson-Tackie about the music industry.

HMD is a five-part series co-hosted by Abena Serwaa of AKADi Magazine and Highlife music expert Bernard Johnson-Tackie of The GoldenStool Project. The Series maps the history of Highlife music from the early 1920s right through to today in five conversations. Each segment is produced by Patrick Ofosu of Epytion.

The HMD Series is streamed on Facebook Live and YouTube. Saturday’s episode will be the fifth and final in the series.

Bernard, one third of the HMD Series collective, said: “Highlife music is the cornerstone of Ghanaian music and has been shaped from its early beginnings through indigenous traditional folklore music such as Kpanlogo and Adowa to taking on the foreign influences of European marching bands and American Jazz.”

“The music acts as an audio soundtrack to Ghana’s history before independence right through to the influence of Black consciousness and the fight for independence. The power of the music still reverberates in popular musical styles such as Afrobeat, proving that the genre is far from dead. We hope through this whistle stop tour of the sound, viewers will build on their musical knowledge and celebrate the resilience and adaptability of the music.”

The first episode was screened in September 2020 and covered the first generation of Highlife from the 1920s to the mid-1950s. It charted the emergence of Palm Wine and early Highlife groups, the main players included Jacob Sam (Kwame Asare) and Kumasi Trio and Kwaa Mensa, and identified the various indigenous and foreign influences that have shaped the unique sound.

Episode two aired in October and ushered viewers into the post-independence era of big dance bands modelled on Western big bands. It featured discussion on big names of their time, including The Ramblers, ET Mensah, Broadway Dance Band, and Jerry Hansen Black Beats.

Episodes three and four aired over November and December and looked at Highlife greats including Ebo Taylor and KK Frimpong during the 1970 and 1980s, the emergence of Borga Highlife and names including George Darko and Daddy Lumba, and the impact those eras have had on today’s Highlife bands such as Santrofi.

The GoldenStool Project is an organisation that aims to provide a forum for the encouragement, promotion and development of Ghanaian arts and culture. thegoldenstoolproject.org

AKADi Magazine is an online culture publication driven by content from Ghanaians in the Motherland and the Diaspora. The magazine aims to explore the ways in which Ghanaians in Ghana and the Diaspora can connect meaningfully through knowledge sharing. It profiles Ghanaians that are shaping and disrupting conventional thinking and discourse in literature, art and history. akadimagazine.co.uk

Epytion is an in progress creative project of expression. epytion.com

Highlife is a music genre that originated in present-day Ghana early in the 20th century, during its history as a colony of the British Empire. It uses the melodic and main rhythmic structures of traditional Akan music, but is played with Western instruments. Highlife is characterised by jazzy horns and multiple guitars which lead the band. Recently it has acquired an uptempo, synth-driven sound.