‘By The Fireside’ Back! 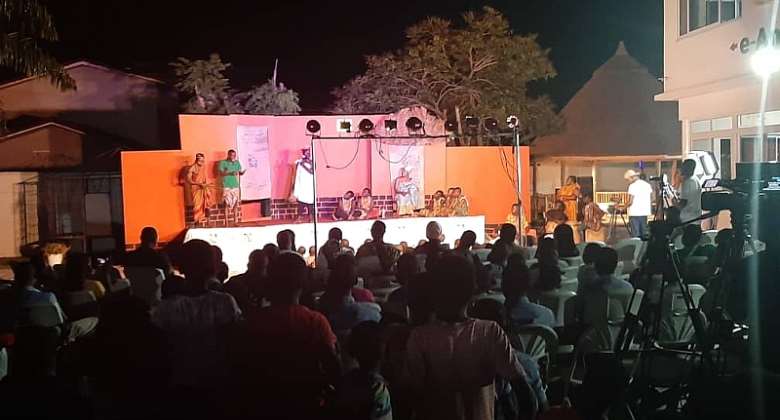 The old age of Grace Omaboe, popularly known as Maame Dokono couldn’t stop the screen goddess from thrilling fans at the launch of ‘By the fireside’ over the weekend at e-Ananse libraries located in Osu.

Attended by hundreds of fans, the return of the children’s favourite show witnessed a memorable performance from Maame Dokono as well as some fascinating performances by the old cast among many others to the admiration of the crowd gathered.

The launch also saw high dignitaries in attendance including personalities from UNESCO, Ghana Folklore Board and Bureau of Ghana Languages.

‘By the Fire Side’, a monthly live storytelling session is set to be an evening of fun and entertainment which would be held every last Saturday of every month. It is aimed at reviving the beautiful art of Ghanaian storytelling.

Maame Dokono on the night was honored for her immense contribution over the last 40 years to the arts and entertainment industry.

e-Ananse presented a citation that reads; “For your contribution towards the promotion of storytelling in Ghana, e-Ananse Libraries is proud of you and thus, says…Ayekooo!

The Director of e-Ananse Libraries, Cephas Larbi in a short documentary showed at the ceremony said “In Ghana, one person who has paid her dues and gone an extra mile to promote the art of storytelling over the last 40 years or more, is Madam Grace Omaboe.

“She has become a household name as an actress and script writer and has told hundreds of meaningful stories over the last 40 years, through her television drama series, OBRA.

“Her BY THE FIRE SIDE programme on television has remained a key contribution to the art and promotion of storytelling in Ghana”.

He said the management of e-Ananse, is convinced of the need to celebrate Grace Omaboe and honour her for her contribution towards the art and promotion of storytelling in Ghana over the decades, stating “e-Ananse is proud to be associated with Maame Dokono”.

Madam Omaboe after receiving the citation thanked e-Ananse Libraries for recognizing her effort and bringing back the ‘By the fireside’ as well.

Hottest Photo Reports
Catch up with all the political quotes from our politicians.
Advertise here
More from Art & Culture
ModernGhana Links
Painting Kumerica: The Evolving Artistry Of Dankyi Mensah
Annual Akwaaba Festival '22 set to kick off on August 4 to 6
Celebrities must be ambassadors of Ghanaian tourism — Okraku Mantey
TOP STORIES