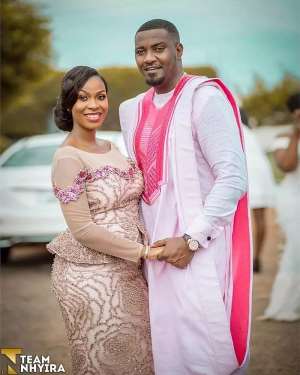 Actor and entrepreneur, John Dumelo, is set to officially follow his traditional marriage ceremony with a wedding.

The event is happening on Saturday, May 11.

The actor-turn-politician on May 12 2018 married his longtime girlfriend in a beautiful traditional ceremony on a Saturday morning at a location in Spintex, Accra.

The traditional marriage took place at the residence of his fiancée then, Gifty Mawunya Nkornu.

John Dumelo and his wife welcomed their first child some months after they got married.

The couple had been tight-lipped on the date of their white wedding since their traditional marriage.

The couple, however, has finally decided on the date.

The wedding, which will be attended strictly by invitation, is scheduled to take place outside Accra.