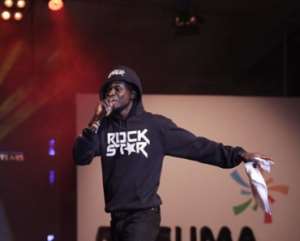 The Lynx Entertainment artiste launched the album yesterday, December 15, 2018, at the VIP Car Park of the Kumasi Sports Stadium.

Thousands of music lovers were present to support the highlife artiste upon the release of his ‘Rockstar’ album.

Other musicians who performed at the Rockstar Concert, apart from Kuami, were Okyeame Kwame (whose upcoming ‘Made in Ghana’ album features Kuami Eugene), Kwesi Arthur, Bless, Adina, Kidi, DopeNation, Strongman Burner, and others.

The ‘Rockstar album which features only Sarkodie has 13 songs including ‘Walahi,’ ‘Confusion,’ ‘Angela’, ‘Wish Me Well,’ Rockstar’ and ‘Heaven.’

To most patrons, one highlight of the concert was Kuami’s closing performance.

He decided to re-enact a scene in the video he did for 'Wish Me Well,' live on stage.

Kuami who earlier was clad in an all-black costume changed into a red jacket. As the lights went brighter, showers of 'rain' started pouring on him, as was done in the 'Wish Me Well' video.