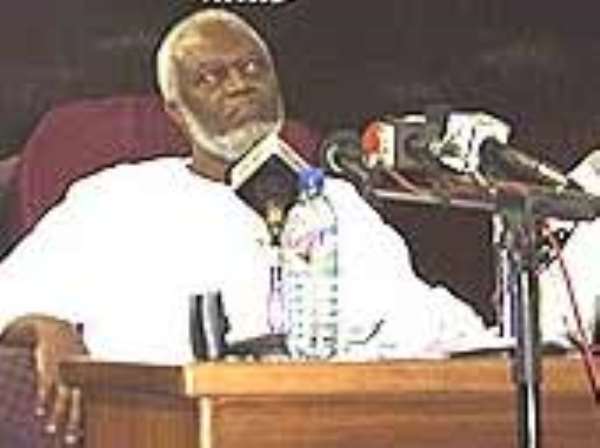 THE FORMER National Security Capo in the administration of the Provisional National Defense Council (PNDC), Captain Kojo Tsikata (Rtd.), has endorsed his long time close pal, Dr. Obed Yao Asamoah, as the obvious and credible choice for the chairmanship position of the National Democratic Congress (NDC). "If you examine the track record and achievements of Dr. Asamoah and Dr. Kwabena Adjei, it is obvious that Dr. Asamoah is the better of the two and would fulfill the functions of the chairman of the NDC than Dr. Adjei."

Describing the contest between the incumbent chairman and Dr. Adjei, the soft-spoken ex-soldier, averred that, "I understand the contest for the NDC chairmanship is between Dr. Asamoah and Dr. Adjei. I think this is a bizarre contest, because it seems to me the delegates to the congress are being asked to choose between cheese and chalk. In other words, as the old folks in the villages would say, 'monkeys play by sizes.'"

Speaking to The Chronicle in an exclusive interview on a wide range of issues including his relationship with the former President, Jerry John Rawlings, his views on the upcoming congress and his response to media reports that he had distanced himself from Obed Asamoah and thrown his weight behind Dr. Kwabena Adjei, the one time chief Security Adviser categorically stated that there was no truth in the allegations that he had disclaimed Dr. Asamoah.

Captain Tsikata, who said he did not want to sound extravagant regarding the congress of the NDC, said, "As you know I don't normally speak to the press on issues since I retired from government, but I am glad to welcome you here to give you this interview because I regard the publication in the National Democrat newspaper as scandalous.

"It is scandalous because there is no iota of truth in their story. I have been out of this country for a while and I only came back last week."

Expressing disgust, he said the publication was a pure invention of the newspaper or an invention of the anonymous former ministers who were alleged to have met him and heard him made those declarations, adding, "I think it is part of the vile propaganda against Dr. Asamoah."

Touching on his relationship with the founder of the NDC, Mr. Jerry John Rawlings, the Capt. Tsikata said, "I will say that my relationship with Jerry is excellent. I always regarded him, from the first time we met, as my younger brother and will continue to regard him as such, in spite of rumours that are floating around about our relationship.

"In the heat of the struggle or in the revolutionary process, all of us accepted him and respected him as an exceptional leader. I can tell you that some of my former colleagues in the PNDC and in the NDC administration are working hard to ensure that he is respected and admired for the contributions he made in the formation of the NDC and for his role in the history of our country, as well as his role in the struggle of the third world to defend our sovereignty and dignity and our own independent path of development."

Asked about his views on the NDC's upcoming congress scheduled to take place at Koforidua in the Eastern Region, the relaxed ex-intelligence capo said, "I will like to say to the delegates, who are going to attend the congress in Koforidua, that this is a congress of unity and of reconciliation. It is not a battle between warring factions, but a peaceful congress within the NDC family to elect some members of the same family to occupy certain positions."

He continued, "There would be winners and losers and I am confident that the losers would be the first to congratulate the winners; and the winners would work with the losers in the task ahead, which is to win the 2008 elections".

Responding to the apology offered by Dr. Asamoah to Prof. John Evans Atta Mills and Jerry John Rawlings, Capt. Tsikata said in his opinion, it was a mature and positive act.

It would be recalled that the National Democrat, on its front page, stated that the paper had learnt the former security 'supremo' had distanced himself from Dr. Asamoah, in a meeting with three former ministers.

According to the paper Captain Tsikata said he was at pains to explain to the rank and file of the NDC why he had decided to withdraw his support from the candidature of Asamoah, with the sole aim of seeing that the NDC is united and properly retooled for the task ahead.

According to the paper, Tsikata was prepared to put his experience at the disposal of the party, irrespective of whoever emerged as chairman, but was quick to add that he thought a neutral person would do a lot of good and brighten the chances of the NDC, to move towards reconciliation and its legitimate claim to political power in 2008.

In sharp contrast, Captain Tsikata stated that this was a figment of the paper's imagination.