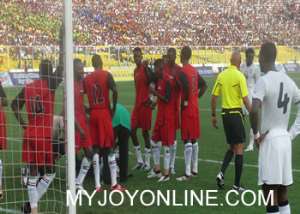 
Sudanese Coach Mohammed Abdullah Madza is relishing an outright qualification into the 2012 Nations Cup following an impressive outing against the Black Stars of Ghana on Sunday.

The Desert Hawks picked a point in a goalless draw, a game the Stars failed to impress.

Coach Abdulla Madza believes his side was better and should have carried the day.

He told press men after the game his side has a good chance to book qualification into Equatorial Guinea and Gabon 2012.

“Technically we have good players,” he said adding “defensively we played good, offensively we had many chances but we couldn't take them.”

He said his team has enough time to prepare for the Stars in far away Sudan for the return leg.

Ghana and Sudan are joint leaders of Group I with four points apiece. Congo follow with three points and Swaziland languish at the bottom with no point.