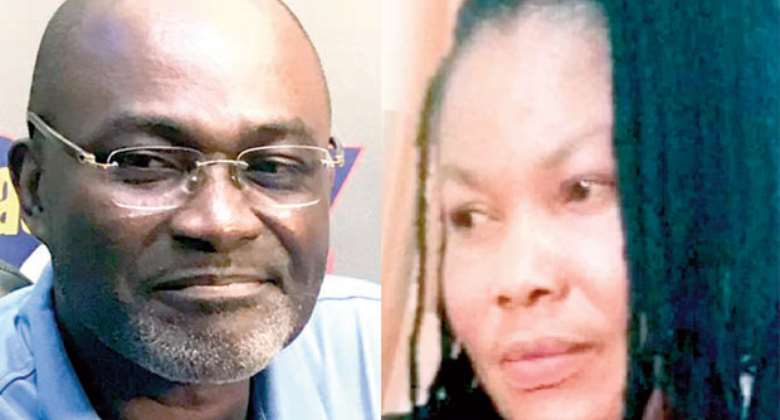 Loudmouth politician Kennedy Agyapong who appears to be a 'Vampire Slayer' seems to have finally fulfilled his threat of exposing what he termed as the “fraudulent” activities of Nana Agradaa, a fetish priestess who is based at Sowutuom in Accra.

The Assin Central lawmaker, in a fresh recorded audio, enumerated some of the alleged tricks that Nana Agradaa has been using to 'dupe' her gullible clients.

He said most of the people who have fallen prey to Nana Agradaa's fraudulent activities are greedy because they visit the fetish priestess to make them rich overnight.

Ideally, Kennedy Agyapong said he would have remained silent and allowed Nana Agradaa to continue to dupe those greedy people, but he is only reacting because Nana Agradaa is “fake” and “wicked”.

“I have a problem with Nana Agradaa because she usually orders her numerous muscularly built men to chase her victims that had come back to their senses and demanded their monies from her,” he disclosed.

Kennedy Agyapong said he has launched a personal crusade to expose the alleged fake activities of people parading themselves as 'men of God' and other spiritualists, and would not relent until they are all smoked out.

He has already dealt with Bishop Daniel Obinim, the leader and founder of the International God's Way Church, whom he claims is fraudulent.

The MP said even though he has not attacked Nana Agradaa, she just started to attack him because she seemed unhappy with he (Kennedy's) exposé of Obinim.

“Nana Agradaa, the fake fetish priestess at Sowutuom, should stop making noise and shut her mouth up, else I would direct my spotlight on her illegal activities,” Kennedy Agyapong warned recently.

And true to her stern warning, Kennedy Agyapong has finally put his spotlight on Nana Agradaa by exposing some of what he said were her illegal activities.

According to Kennedy Agyapong, the fetish priestess usually collects money from her victims with the promise of doubling their money.

According to the lawmaker, the most disgusting aspect of Nana Agradaa's 'dirty' activities is the fact that she has trained machomen who she 'unleashes' on her victims after she had taken their moneys.

He said Nana Agradaa is “wicked” to an extent that she once collected GH¢21,000 from a poor meat seller from Winneba, with a promise of doubling the money, but duped the woman and chased her with machomen.

Kennedy Agyapong disclosed that Agradaa, under the guise of using her powers to double money for people to get rich instantly, also managed to dupe a certain lady an amount of GH¢2,500 and again chased her with machomen.

The Assin Central MP also said another guy was duped of GH¢4,500 “and a lawyer is sitting here telling me that a woman from his hometown was duped of GH¢21,000 and Agradaa chased her with machomen afterwards.”

According to him, people have lately been flooding his office with testimonies and hardcore evidence of some of the 'fake' and 'fraudulent' activities of Nana Agradaa, and in due course he would make them public.

“If she has that spiritual powers as she claims, then Nana Agradaa should be the richest woman on earth now. If she has powers, she would double the money and keep it to become rich,” the MP said.

Nana Agradaa has not yet commented on the MP's allegations.