Africa: SA in lockdown, curfews in the west as continent braces for Covid-19 wave 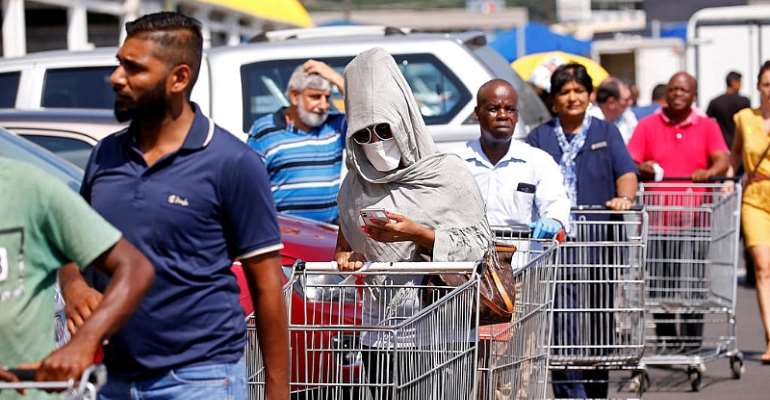 South Africa has imposed a 21-day lockdown as the number of coronavirus cases more than triple. Curfews have also begun in Senegal, Cote d'Ivoire and will soon be rolled out in Sudan, as the continent tries to contain the accelerating coronavirus outbreaks.

South Africa infections
President Cyril Ramaphosa announced the 21-day lockdown in a televised address to the nation on Monday, insisting that the continent's most advanced economy needed to escalate its response to the coronavirus outbreak "(to) avoid a human catastrophe".

However,  the death toll from Covid-19 instead accelerated, climbing from 402 to 554.

While coronavirus cases were slow to arrive in Africa, the virus is spreading quickly, and on Tuesday businesses in South Africa raced to make plans for the nationwide lockdown set to begin on Thursday at midnight until 16 April.

South Africa has the most confirmed cases of coronavirus in sub-Saharan Africa and public health experts are worried that it could overwhelm the health system if infection rates continue to rise.

Both their presidents have declared states of emergency, imposing curfews and travel restrictions on their populations.

Other countries in West Africa such as Mauritania and Burkina Faso, the hardest-hit country in the region with 99 cases and four deaths, have also announced curfews in recent days.

Sudan, which so far has two confirmed cases, said it will impose a dusk-to-dawn curfew from Tuesday at 8 pm (1800 GMT) to curb the spread of the outbreak.

Nigeria top aide infected
In Nigeria, where a 67-year old man became the first patient to die on Monday, reports have emerged that the president's chief of staff has tested positive for coronavirus.

The aide Abba Kyari, in his 70s, and brought the disease into the immediate circle of 77-year-old President Muhammadu Buhari.

There are no reports as to whether Buhari, who has suffered from medical ailments in the past, has been tested.

Kenya in search of aid
Kenya, meanwhile, confirmed nine more cases of Covid-19 Tuesday bringing its total to 25. Health minister Mutahi Kabwe told reporters the cases are spread out in four counties: Nairobi, Mombasa, Kilifi and Kwale and include 7 Kenyans and 2 foreigners.

The news comes as authorities in Nairobi seek help from the International Monetary Fund (IMF) to support the economy in the face of the coronavirus crisis, as the disease cripples crucial tourism and farm exports.

Tunisia army on patrol
The IMF has already granted Tunisia a loan of about €370 million o stave off the economic fallout from Covid-19.

The north African country has 89 confirmed cases of the virus and on Monday ordered the army to patrol the streets to force people to respect a general lockdown.

DR Congo mining on hold
In the Democratic Republic of Congo, mining companies have begun downsizing their operations and the government has ordered a 48-hour lockdown in part of its copper and cobalt heartland.

The lockdown order was issued late on Sunday after two people tested positive for the virus in the capital Lubumbashi.

However, Congo's health minister said late on Monday that the cases were negative.

Ethiopia on Monday also shut its land borders to nearly all human traffic in its efforts to curb the virus spread.

Africa's second-most populous country has so far recorded 11 infections and no deaths, but officials have struggled in recent days to enforce prevention measures including bans on large gatherings.

African finance ministers have also called for a $100 billion stimulus (93 billion euros) package, including a suspension of debt service payments.

Panic in Madagascar
On the ocean island of Madagascar, where 17 cases have been confirmed, panic buying has seen supermarket prices sky-rocket, with a kilo of rice jumping from 70,000 to 120,000 Malagasy Ariary (17 to 30 euros).

More than 1,400 cases of coronavirus have now been reported across Africa, according to a United Nations rally.

US revokes licence of top Chinese telecoms company
23 minutes ago