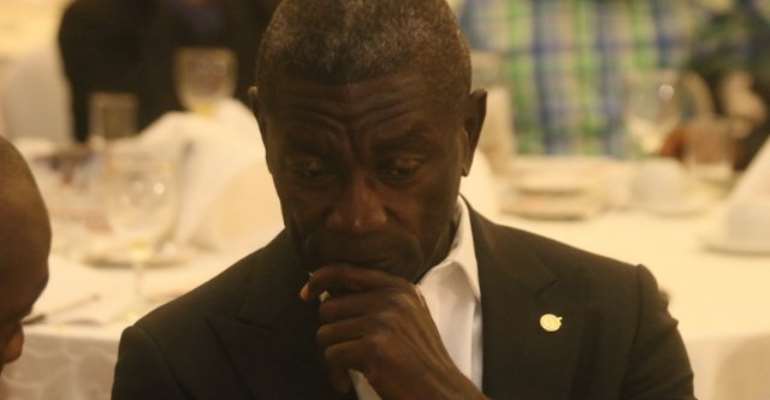 Founder of former UT Bank, Prince Kofi Amoabeng is also to deposit his passport and report to the investigative teams twice in a week.

The circuit court has granted bail to founder and owner of defunct UT Bank, Prince Kofi Amoabeng, who is facing charges of stealing and money laundering.

The bail granted by Justice Essandor was in the tune of GHâ‚µ110 million with two sureties who earn not less than GHâ‚µ2,000.

Mr. Amoabeng is also to deposit his passport and report to the investigative teams twice in a week.

Justice Essandor further explained that his decision to grant bail was based on the sound advocacy by lawyers of the accused person who has demonstrated his ability to cooperate with investigations.

The two pleaded not guilty to the charges levelled against them when they appeared before the Accra Circuit Court Tuesday, Graphiconline reported.

- The Special Investigation Team (SIT) of the police received a report from PricewaterhouseCoopers Gh. Ltd through the Governor of Bank of Ghana into suspicious transactions relating to UT Bank.

- According to the report, the UT Bank engaged in some off-balance-sheet transactions log – issuing investment certificates to investors in the name of the bank. However, these amounts totalling GHS51,334.387.08 and $8,612,829.33 were later transferred to UT Holdings.

- The report further disclosed that UT Bank issued an investment certificate in the name of the Bank although the amounts were never credited to the customer's account but transferred to UT Holdings.

- The report added that Prince Kofi Amoabeng, then Chief Executive Officer of UT Bank, signed most of the customers’ investment certificates and subsequently transferred them to UT Holdings.

- Investigations further revealed that the customers’ monies were with the UT Holdings. Most of the investment with UT Bank was absorbed by Ghana Commercial Bank Limited as part of the takeover of UT Bank in 2017.

- However, the report indicates that the rate of interest issued to each investor varied and was subject to negotiations. It was also revealed that 15 transactions were identified in respect of 12 institutions whose funds sum up to GHS51,334,387.08 and $8,612,829.33 all placed with UT Holdings.