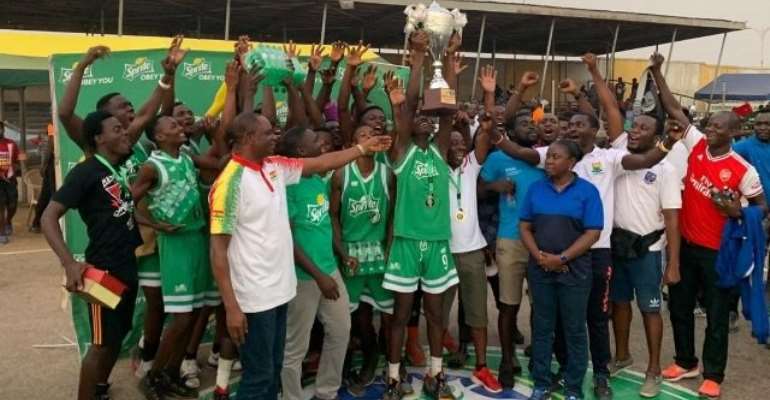 The Sprite Ball Championship is an annual inter-high schools basketball tournament in Ghana.

The College becomes the second Senior High School from the Volta Region to win the Sprite Ball Championship, the 14th to be organised in 13 years, after Keta Secondary School, also based in Keta beat favourites PRESEC Legon 25-18 to lift the trophy in 2014.

KETABUSCO served their opponents bitter revenge by defeating them in the opening games and at the finals for kicking them out of the tournament last season.

Keta Business College had been favourites throughout the tournament having remained unbeaten in all five matches to the final.

For their award, each player was presented with a certificate and a medal and a cash prize of GH¢2,000 to the entire team.

Mr Senyo Ashiagbor, the coach said his side did its homework after the defeat the team suffered in the previous season and was satisfied they paid back Mfantsipim School by "beating them back to back."

Mr Yaw Sakyi Afari, Head of Rite Sports, organisers of the Championship was thrilled by performances of participating schools for this season and congratulated KETABUSCO for putting up a "wonderful" show, which won them the trophy.

Mr Afari, however, advised them to present stronger front next season "because winning the tournament is not a big deal but defending the title is the difficult part."

He called for more support towards the development of girls' basketball saying, he was not impressed about the overall performance in the girls' division.

Dr Seth Kwami Anani, President of the Old Students of KETABUSCO (Coronats) in an interview with Ghana News Agency said "nothing can be more exciting than this win" and added, "the school crowns its 80th anniversary with National Sprite Basketball championship win means we have started the year on a good note."

The Sprite Ball Championship headlined by Coca Cola Company came off from Friday and Saturday at the El Wak Stadium, Accra with 20 teams in all, 12 from the boys division, 8 from the girls' division and saw Shama Senior High School in the Western Region carrying the day in the girls' division.