In the Next Decade, Nuclear Power for Africa Is A Necessity, Not An Option 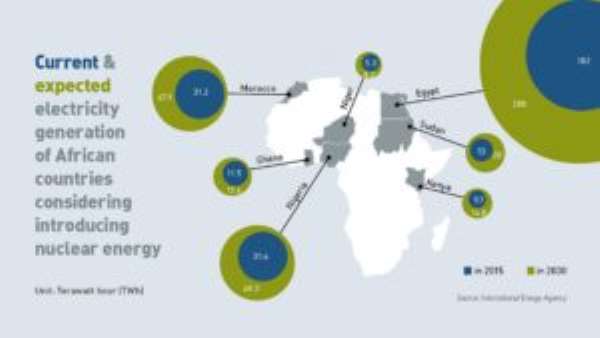 In the next decade, beginning on January 1, 2020, African nations must pursue nuclear energy. This is necessary to provide energy to the continent, which is suffering from a huge deficit in electricity, but nuclear technology has many additional benefits to African economies. This includes creating large amounts of potable water. With nuclear power plants along the Mediterranean and Red Sea, the equivalent of a “second Nile River” from desalination through nuclear powered desalination would transform the nations of the Nile Basin. Constructing Small Modular Nuclear Reactors-SMRs (see below) in every African nation would be a important first step towards ending poverty and industrializing the continent. Let me bluntly state: without abundant, low cost energy, Africa will not develop, and its people will suffer. Energizing Africa is not an option, it is a life and death necessity!

“Combining renewables with nuclear power, however, makes the task of powering Africa’s growing economies more viable – not to mention the other useful and often overlooked aspects that nuclear can contribute to development. Although South Africa is the only country on the continent currently operating a nuclear power plant, the technology is being increasingly considered by African leaders. For example, works are set to begin on a new 4.8GW plant in El Dabaa Egypt next year, which is being developed by Russia’s Rosatom.

“Other countries including Ethiopia, Zambia, Nigeria and Ghana also have memorandums of understanding with Rosatom that pave the way for nuclear development. South Korea are also looking to invest in the continent’s energy industry, while Chinese nuclear firms have entered into agreements with Kenya, Sudan and Uganda. Energy is a key driver for development. In Ghana, for example, nuclear is seen as the obvious way to provide reliable energy for bauxite refineries which would increase jobs and export capacity.

“But nuclear technology provides more than just energy: many advanced nuclear designs produce high-temperature process heat for uses in desalination plants, chemical production and even district heating systems. These subsidiary features would allow nuclear technology to benefit society beyond the generation of electricity – and potentially accelerating its deployment.

“Nuclear technologies are already being used in agriculture, for example, where isotopes and radiation techniques are harnessed to combat pests and diseases or to increase livestock and crop production. For instance, farmers in Benin have increased their maize yields by 50 percent, while simultaneously reducing the amount of fertiliser used by 70 percent, thanks to the deployment of nuclear-derived nitrogen-fixation methods – the same techniques that are allowing Maasai farmers in Kenya to double vegetable crop yields with half the irrigation of traditional methods.

“By contrast, nuclear desalination could use the excess heat from new reactor designs like Small Modular Nuclear Reactors (SMRs) to produce thermal and electrical energy without emitting greenhouse gases, which then transforms seawater into freshwater. While capital costs for nuclear plants are initially high, fuel costs are low and stable: a doubling in the price of uranium would result in only a five percent increase in the total cost of energy generation. In contrast, an equivalent increase in oil would cause freshwater production costs to surge by 70 percent.”

December 13, 2019—There’s some real good news for the U.S. economy today. NuScale, an Oregon company that is developing a small modular nuclear reactor (SMR), has passed the next stage of review by the Nuclear Regulatory Commission.

As this blog has reported before, the mass development of nuclear power is a critical component to bringing the productivity of the U.S. economy out of the doldrums, and thus bringing us into a new era of prosperity. High-speed rail, modernized water systems, the space program, and many other components of an economic recovery program depend upon generating huge amounts of electricity that are way beyond our current capacity. Nuclear represents a leap in productivity that will allow us to get there, as well as a step on the way to the development of thermonuclear fusion.

NuScale’s design for an SMR has now gone through four phases of review. It still has to go through stages 5 and 6. According to the company’s press release, the Oregon-based company is partnering with the U.S. Department of Energy, as well as other companies. It has received support from Congress.

As I outlined in a post approximately one year ago, the promise of SMRs lies not only in their safety design, but in the fact that the United States still has the industrial capacity to produce them assembly-line fashion. Over the past 40 years, the heavy industrial capability for producing a standard-sized nuclear reactor (measured in hundreds of megawatts or over 1000) has been dismantled. But a small reactor of 12 to 50 megawatts could be produced in assembly-line fashion, and provide a flexible means of providing power outside major urban areas, including hard-to-reach regions.

The United States is not the only country working on SMRs, and some in the industry are seeking to motivate investment in NuScale on the basis of “beating the competition.” Such peaceful competition has a huge positive payoff for the human race, and can only be encouraged. Thus NuScale’s progress with the NRC is most welcome news.

The NuScale press release can be read in full here.