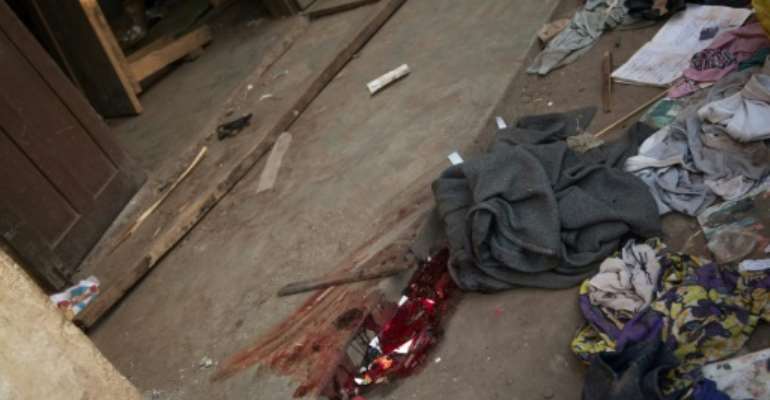 Aftermath of fighting between militiamen and traders in a restive district of Bangui, the capital of the Central African Republic. By FLORENT VERGNES (AFP)

At least 30 people were killed in fighting between militiamen and traders in a restive district of Bangui, the capital of the Central African Republic, a security official and a local imam said Thursday.

"Thirty bodies have been brought to the mosque," said Awad Al Karim, the imam of the Ali Babolo mosque in a district called PK5 that became a haven for many Bangui Muslims at the peak of Christian-Muslim clashes in the country.

A security official, who asked to remain anonymous, also put the number of dead at at least 30, without providing any further details.

The fighting began after traders in the district took up arms to oppose taxes levied by militia groups, the imam said.

Bursts of automatic fire and explosions were heard on Wednesday evening and on Thursday morning, according to an AFP journalist who was in a neighbouring district.

The head of the African Red Cross, Antoine Mbaobogo, said the toll "stood at 23 at 4:00 pm but could now be 33," adding that there were still bodies near the market. 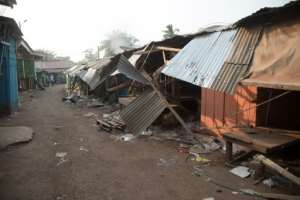 Shops in a street of the PK5 district in Bangui were ransacked after the clashes that left at least 30 people dead. By FLORENT VERGNES (AFP)

Neither the UN peacekeeping force MINUSCA nor the CAR authorities have been able to assert control over the PK5 district.

And MINUSCA did not provide any exact toll from the fighting, saying only there had been "dozens of victims".

MINUSCA spokesman, Bili Aminou Alao, said a rapid response force had been sent to the area.

"Part of the market and some vehicles have been burned," he said.

"Between 40 and 50 shops have been burned down, as well as four or five houses," said Patrick Bidilou Niabode, head of the CAR's civil protection service.

Voluntary firefighters put out two fires which had been spreading in the market but were unable to tackle a blaze at two houses because of heavy gunfire, he added.

It has been gripped by sporadic violence since 2014, after then-president Francois Bozize was ousted in a coup.

Fierce fighting then erupted between predominantly Christian and Muslim militia, prompting the intervention of former colonial power France, under a UN mandate.

Attempts to broker a lasting peace have repeatedly broken down and most the country lies in the hands of armed groups, who often fight over the country's mineral resources.

The PK5 district is a powder keg. In April 2018, MINUSCA, responding to appeals by local traders, launched an anti-militia operation named Sukula ("Clean-up" in the CAR language of Sango). 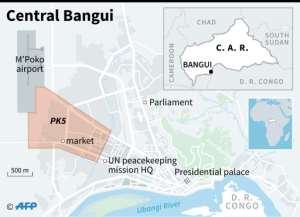 The operation ended bloodily with the death of about 30 people and a hundred wounded, sparking a wave of anger among local people.

The CAR's long conflict has forced nearly a quarter of the country's 4.7 million people to flee their homes.

The United Nations estimated in September that two thirds of the population depends on humanitarian aid to survive.

The country is ranked next-to-last after Niger on the 2018 UNDP's Human Development Index, which compares longevity, education, and income per capita. Life expectancy is just 52.9 years.