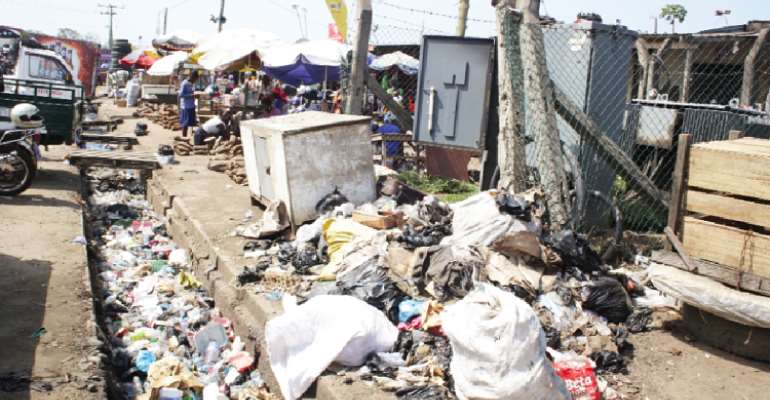 Shopping in malls, supermarkets and hypermarkets are everyday affair worth repeating. These modern markets have spacious parking spaces and facilities for watching movies, swimming, or wine and dine with one's family.

However, a visit to most of the indigenous markets dotted across the Assin North, Central and South districts may discourage you from buying anything due to unsanitary conditions.

The situation becomes increasingly unbearable during the so-called "market days". The markets become engulfed with uncontrollable and indiscriminate dumping of refuse.

A visit to some of these markets at Mfantse Nyankomasi, Andoe, Fosu and Akropong-Odumasi would confirm this as it became almost a hassle walking in it.

Nature of markets
Nyankomasi Ahenkro has the biggest of the markets. It is located along the Yamoransa-Assin Fosu highway.

The market has no good layout gutters and streets, therefore, with the slightest downpour, inhabitants became helplessly stranded. At certain vantage points where there were refuse containers, they were left to overflow for several days before emptied, if at all. In effect, mountainous refuse dumps had developed.

While shoppers contended with hawkers for space, heaps of garbage were also left on pavements compounding the already chaotic human and vehicular traffic jam.

At every turn, there were hawkers calling as others pulled our dresses in their quest to arrest our attention to buy their wares. Indeed, there was heavy vehicular traffic as well as human congestion caused by the activities of hawkers.

As traders and hawkers competed for walkways, pavements and open spaces, their numbers kept increasing. At every minute, many dilapidated vehicles with overloaded passengers alighted from the villages.

As if that was not enough, there were acidic gusts of smoke that swell across the market dump site with dotted wetlands of burning mounds of trash.

They tooted their horns severally to create a high cacophony of noise as the sidewalk spaces available for pedestrians shrunk in competition for spaces. Some traders left their toddlers to play around in the midst of the untidy environment amidst the noise, and unbearable stench emanating from the days of uncollected refuse.

Pedestrians, who insist on using the pavements, had the unpleasant experience of ‘elbowing’ their ways through the market and in some cases crushing down wares that had been displayed on the pavements, which caused heated confrontations.

Others complained about the discomfort of shopping in the commercial center.

"The congestion on the pavements, allow pickpockets to get access to other people’s items. It's really uncomfortable walking in this market, the traders keep holding on to you tightly just so you can buy their goods,” Mr. Eric Opoku, a customer lamented.

They were engulfed with filth, flies and pungent smell. Traders had to deal on regular basis, with the unbearable stench that emanated from the dumpsites close to them.

At Andoe market for instance, the dumpsite was just a stone throw from the market, thus making it extremely difficult for traders to ignore the stench that greeted them every morning.

Traders at Akropong-Odumasi market were not the only victims of the stench but flies from the dump site. Residents and surrounding communities also had to contend with the situation daily. Gutters in front of these markets were filled with rubbish, making it extremely difficult for water to flow.

Madam Comfort Ansah, a 43-year-old cabbage seller said the rising insanitary conditions started three years ago, when the few inhabitants around the dumpsite gathered refuse in their houses and then disposed of the rubbish in the containers that were placed at the market.

She added that due to the growth in area population, the containers, which took weeks to fill now fill up within a matter of hours.

The authorities in charge of emptying the containers seem unconcerned even as the rubbish keeps piling up.The residents who have no choice or other means of disposing of their waste have kept accumulating their rubbish at the site.

"Because the containers are not picked regularly, the overflowing garbage covers them completely and they get "lost" in the rubbish, then new containers have to be brought to "replace" them and they also suffer the same fate", she said.

Most of the traders the GNA spoke with, lamented the poor sanitation situation at their various markets.

Madam Cynthia Quam, a 42-year old trader who owns two shops at Odumasi market said she and five others had been living with the situation for months adding that no efforts had been made to address the problem permanently.

Mrs Leticia Tawiah, a regular shopper at the market said“ I work few meters away from the market and constantly buy my weekly foodstuffs from the market women here. Although I do not like the environment, I have no option because the situation is not different from other markets."

Assembly prosecution
Towards remedying the situation, the Assin South District Assembly (ASDA), over the same period arrested 30 people for various sanitation infractions as part of efforts to rid the District of filth.

Six were either cautioned or fined between GH¢200.00 and GH¢350.00 but the others will appear in Court on Wednesday, October 16.

Mr Mensah said if all the people would be law-abiding and be conscious about the environment, there would be no need to meet once a month to clean the environment. He appealed to the Assembly members, chiefs and opinion leaders to educate residents to desist from indiscriminate dumping of refuse, disposal of solid and liquid waste, particularly on the roadside and in gutters to maintain clean environment.

Clean environment, according to him, was a shared responsibility and there was the urgent need to change attitudes for the President's vision of making Ghana clean to become a reality.

Mr Mensah announced plans by the Assembly to scale up public education to create more awareness on sanitation, towards sustaining a clean district.

Conclusion
I wish to urge the various Assemblies to take bold steps to stop the sale of food on the ground and close to refuse dumps to help ensure food safety for the public.

It was common in the markets and communities to see food vendors serving food to customers with bare hands that have not been washed, people touching or sharing food without washing their hands, and food not properly stored to ensure that they are safe to eat.

Market women must be encouraged to be sanitation ambassadors at their shops and sales points at the markets and at their various homes.

It is believed that the traditional markets which are mainly occupied by the Market Queens are the most waste generating areas in the country but with a little caution and discipline by our mothers, wives and sisters I am sure our markets can be cleaned and a good name will be reckoned when market women are mentioned.

We need to critically examine and evaluate the impact of sanitation on the process of development. We have to report in ways as to enhance understanding and appreciation of the issues and processes.

The public must be adequately informed and made to appreciate their own roles in the processes and how events and issues could affect them.