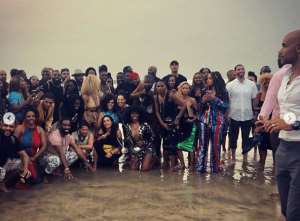 A total of $1.9 billion has been generated into the economy through activities related to the “Year of Return”.

The Minister of Tourism, Arts and Culture, Mrs Barbara Oteng-Gyasi, said the “Year of Return” programme had also brought about an increase of over 200,000 in total arrivals into the country.

She said total arrivals in the country this year stood at about 750,000.

Mrs Oteng-Gyasi was speaking at a ceremony at Anomabo to inaugurate a tourist centre and hand over facilities at the Heroes Garden which has been transformed into a Memorial Garden of Return to boost tourism in the town.

Before the refurbishment exercise, the Heroes Garden had portrait statues of Kwegyir Aggrey, Ekem Ferguson and Nana Amonoo I of Anomabo and now has in addition symbolic statues of people of the African diaspora returning “home”.

The activity is part of the Legacy Project by the ministry to commemorate the “Year of Return.”

The tourist centre will serve as an information centre and provide a welcoming environment for tourists.

Mrs Oteng-Gyasi said the government was working hard to ensure that the country derived optimum benefits from the sector to accelerate development of Anomabo and indeed the country at large.

Citizenship
She said further that more than 200 people of the African diaspora had been granted citizenship by the President while land had been offered to encourage many more to return to the motherland.

She added that the year of return had improved relations between the country and the African diaspora while international media coverage of Ghana had been enhanced and high profile visits to the country gone up.

“There has been tremendous community involvement which has stimulated the local economy including hoteliering, tour operating and other related businesses,” she said.

Narrative change
The Minister of Tourism said the “Year of Return” had cemented Ghana’s pan-African legacy and had put a global spotlight on the country and helped to position it as a historic, cultural and vibrant hub and had as well changed the narrative of what was reported about Ghana and the rest of Africa in general.

She said the Ghana Tourism Authority (GTA) had also had indications of a 100 per cent hotel occupancy rate recorded for the last week of November with increased bookings for tours to areas linked to the trans-Atlantic slave trade such as Cape Coast and Elmina.

Year of Return
The “Year of Return” is a year-long event of the return of the descendants of the first enslaved Africans from James Town in Accra to James town in Virginia in the United States of America (USA).

Mrs Oteng-Gyasi said the “Year of Return” had been largely successful and established Ghana as a preferred destination for the global African family.

She said the memorial garden and tourist centre at Anomabo was part of the social impact and community development project and part of the of the ‘Year of Return’ programme, adding that it was expected to invigorate local businesses.

She thus urged the community to take full advantage of it.

More sites
The Chief Executive of the Ghana Tourism Authority, Mr Kwesi Agyeman, gave an assurance that the authority would work to develop more sites to further boost tourism and urged the people of Anomabo to take good care of the facility.

A representative of the Omanhen of Anomabo, Nana Owiansah, urged the Ministry of Tourism to rehabilitate Fort William and the old Anomabo Palace into a museum.

Embarrasing Bossman Doesn't Fit To Be At The EC - Ahafo Com...
30 minutes ago