Extracts From Acclaimed Book: My Blood Divides And Unites 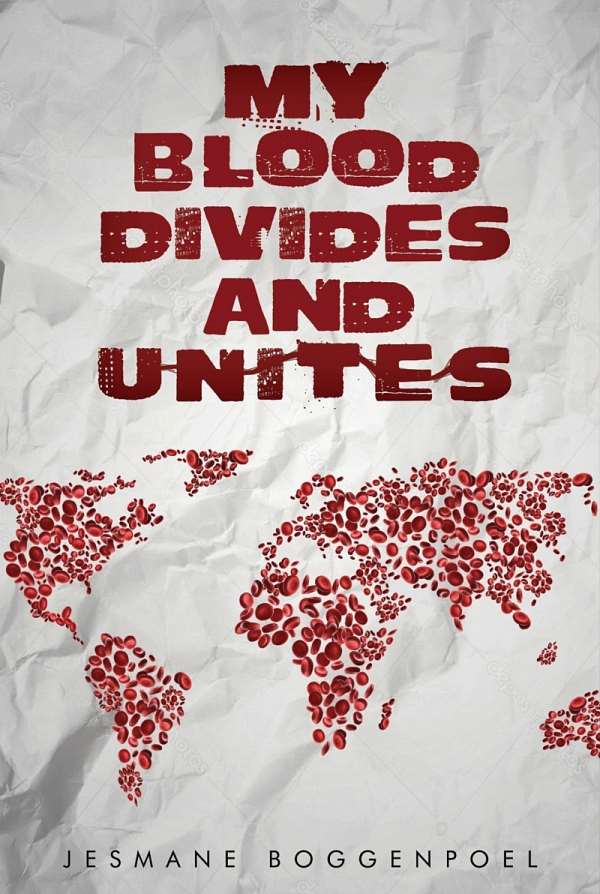 author Jesmane Boggenpoel sets the stage for her memoir with lessons, My Blood Divides and Unites as she recounts her poignant coming-of-age tale of oppression, discrimination and marginalization as a young girl growing up in apartheid South Africa. Following her tumultuous, yet inspirational journey to reconciliation, acceptance and forgiveness, My Blood Divides and Unites offers a universally powerful message and provides readers with a roadmap to self-discovery, reframing their personal stories, and becoming inspirational leaders for others so that all individuals, groups and nations can, as one, look toward the future with hope.

Written with unflinching honesty and authenticity, Boggenpoel’s book offers an important lesson in healing as she details the suffering she and her ancestors experienced at the hands of their oppressors, and the subsequent process as she struggled to explore her past and learn her true self. Despite the devastation and pain endured along this long road to forgiveness, Boggenpoel shares how she was able to find the light in such tragedy and take control of and reframe her own story.

Below are two extracts, chosen by the author, which are freely available for publication.

For more, visit www.myblooddividesandunites.com
Extract 1:
We are all authors, crafting the story of our lives. We continually write and rewrite, interpret and reinterpret what has happened to and around and because of us, reshaping the narrative in an attempt to make sense of it all. An understanding that worked at one point in our lives fails us at another point, and we struggle to compose a different interpretation—to reframe what has happened so that we may understand it in a new light.

Some of us create stories in which we are the heroic protagonist, others, stories in which we are the weary victim. Some cling fast to a few major themes, insisting that each new piece of information be made to conform with the existing interpretation, while others are open to new understandings that may arise as new information challenges old ideas. No matter how we choose to craft our story, it is much more than a personal history. It is our understanding of ourselves, our origins, and potential. As such, it goes a long way toward determining our future.

As our story is constantly being extended and revised, our interpretations of ourselves and the world are reinforced, changed, or both—we cannot escape that fact. What we can do is to take our mental pen in hand and become the conscious, deliberate authors of our story. We can choose to better understand, and sometimes reinterpret our past, and in so doing, begin to change what will be written tomorrow.

For communities which have been repressed, as well as for individuals, reframing the past can make the future seem much more hopeful and promising. I have seen how reframing the past has gone a long way to soothing my pain while simultaneously making me more resilient, appreciative of all those who have loved and aided me, and fueling me with hope……..

I recently reframed large sections of my story after visiting the Slave Lodge, a museum of the history of slavery in South Africa, located in Cape Town. My purpose in visiting was to conduct research for this book, and to understand the truth of the origins of the Coloured community, which has largely been erased from history. The trip was successful in that I gleaned the necessary facts, but gained so much more.

Initially, I felt disheartened and lame as I learned of the horrendous cruelty my slave ancestors faced. I felt shame and, for a few days, was overwhelmed by the helplessness of their situation. After the horror had passed, I struggled to re-frame the experience from a festering wound that holds me back to a positive narrative of fortitude and hope that takes me forward. Reframing was difficult, for I felt stuck in the pain and trauma of my slave ancestors. It was only after I deliberately worked on reframing the story of my slave ancestors, and worked through a few iterations that gave positive interpretations, that I became unstuck.

My reframing includes a better understanding of who these people were. I had seen them as victims of the slaver’s net to be pitied. Instead, at the Slave Lodge I learned that many of the slaves were snatched from far-away lands that in the past boasted marvelous kingdoms and cultures—including India and Indonesia, which are today among the G20 countries. So I most emphatically am not the child of the victims of the world. Instead, I am the daughter of the Khoisan people of the Kalahari Desert, whose unique click languages are felt to be among the very first developed by humans. I am a daughter of Tamil Nadu, the Indian state whose official language, Tamil, is one of the oldest languages in the world and a classical language of India. I am the daughter of Sri Lanka, of Java, Bali, and Sulawesi in Indonesia, Madagascar, Mozambique, all ancient peoples and cultures I can point to with pride.

I am the daughter of smart, creative, and proud people who happened to have been impressed into slavery, yet who clung to their pride and hope in the future, who contributed significantly to the Afrikaans language and South African culture…….

Still, refashioning my story in this positive manner has given me a sense of pride for what the slave community has contributed to my make-up and culture. It has also connected me to, and given me a glimpse into the Black-American slave experience.

Extract 2:
Finally arriving in Johannesburg, he went to the hospital—the Coloured hospital, which was not as well-equipped or staffed as White hospitals. In the United States, the recently deceased Jim Crow laws holding down Blacks had at least made a pretense of being “separate but equal.” In South Africa, there was no such charade. At the hospital, the doctor diagnosed Daddy as having suffered a nervous breakdown, gave him some medication that left him feeling fatigued and foggy-brained, and told him to stop drinking. That was easy to do, for while away on the Murray & Roberts contract, he drank two glasses of wine a day, plus the occasional beer.

Six months later, feeling fine, he started drinking wine and beer again. This was on weekends at the home of a relative who ran a shebeen, which was a house where alcohol could be sold informally. Daddy drank one bottle of wine every Saturday and one every Sunday for six months at the shebeen, and then he began hearing voices again and imagining things. He returned to the Coloured hospital where he was again evaluated by a psychiatrist. The diagnosis was the same: a nervous breakdown. This time, though, there was an interesting twist. The doctor said the problem stemmed from the fact that Daddy never knew who his father was, and this had haunted him his entire life. Indeed, since the time he was a teenager, he had wondered who his father was, but Mama would never tell him. It got to the point where he would drink in hopes of ginning up the courage to ask her, but he never got up quite enough nerve to do so. He failed to do so until she died in 1988, and then it was too late.

Following this relapse, Daddy, feeling confused, tired, and knowing he needed help, was admitted to a Coloured mental institution in Johannesburg for a brief stay. He recovered quickly and returned to work, but soon began drinking again. He then suffered a more severe breakdown, imagining things like the house was burning down, and sometimes seeming to speak gibberish. This was in 1977, when I was four years old.

And now followed nine months of hospital stays and discharges, some with the consent of the doctors and some without. Most of the details are unimportant, for the story of his treatment had already been outlined by apartheid. To begin with, fewer Coloureds in distress would even bother seeking treatment because they had to continue trying to support their families. Any disability pension a Coloured person might be granted would be decidedly less than the one allotted to a White person with a similar work history, and since the Coloured had been making less all along, he almost certainly had less money in reserve to fall back on. If he went for treatment, he did so knowing there were fewer doctors and other personnel at the Coloured hospitals, older and less well-equipped facilities, less treatment in terms of time and therapy, and less in every other way.

Let me give you two quick examples. At one point, Daddy spent six months at a state-run facility in the town of Fort Beaufort in the Eastern Cape. All of the doctors there were White, while the nurses were Black, and the Black, Coloured, and White patients were kept separate. Daddy and the other Coloureds were given a bland, inexpensive diet of corn and beans, the occasional vegetable, and slices of cooked pumpkin, complete with hard outer skin and seeds. Once a week, there was a special treat: a piece of meat. Daddy intensely hated the food.

One day, Daddy happened to go into the kitchen, where he saw meals being readied. On one set of preparation tables was the corn, beans, and other foods he recognized as his regular fare. On another set of tables sat nice plates of meat, mashed potatoes, and veggies. “Who got that food?” he wondered. A woman working in the kitchen told him, “That’s for the White patients.”

Not only were the Coloureds given lesser food, they were also forced to work on behalf of the Whites. Five days a week following breakfast, a supervisor rounded up the Coloured patients and took them off premises to houses belonging to the White hospital managers. There, they would pull weeds, plant things, and otherwise work for three hours for no pay. Was this part of their therapy? If so, why did they only do it at the houses of White managers? Why not on the hospital grounds in a protected environment? And if it was therapy, why didn’t the White patients also pull weeds?

After just one month at Fort Beaufort, Daddy saw that a gate had been left open and quickly walked out, heading down the road to the nearby town. Twenty minutes later, he was in town hoping to find the train station and figure out how to get a ticket back to the farm where he spent those wonderful six years during his childhood. His thoughts were muddled by the powerful medication he was being given; he didn’t seem to realize there was no way for him to buy a ticket, but he knew for sure that he wanted to go back to that place where he had felt loved and cared for, where apartheid had not hammered away at him day after day, and where his future was full of possibilities—or so it seemed to him back then. Unfortunately, his path to the train station had taken him right past the hospital manager’s house, and the manager, who happened to be in his front yard, recognized the khaki hospital uniform and called for an ambulance, which arrived quickly, collected Daddy, and promptly took him back to the corn and beans, weed pulling, and heavy medication.