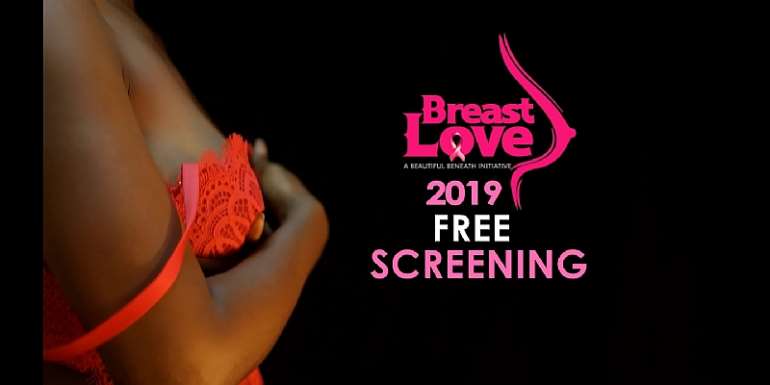 As part of measures to fight against Breast Cancer among women in Ghana, the Chief Executive Officer of Beautiful Beneath, Juliet Gyamfi has disclosed that this year's Breast Love 2019 will be held in three regions of the country.

According to her, the selection were made following reports of increasing numbers of breast cancers cases which emerged from the three regions.

In an exclusive interview with Modern Ghana, Madam Gyamfi said "Reports on the increasing numbers of breast cancer cases were alarming. Through our little ways, we deemed it fit to organise this event to screen and save lives".

In 2018, Beautiful Beneath, a leading company which deals in ladies’ lingerie and sports apparels, became the latest force to join hands with some of health NGOs to step up a vigorous campaign to increase awareness about breast cancer and other related health risks that affect women.

The East Legon-based company partnered with some institutions to assemble health professionals and civil society groups to campaign against breast cancer to interact and find possible ways of stimulating their campaign.

The programme brought medical personnel from some of the leading health facilities who screened over 1,000 women including the elderly.The event was part of activities to mark the annual breast cancer awareness week.

Chief Executive Officer of Beautiful Beneath said "2018 was great but this year promises to be incredible. My team and I will be touring Sunyani in the Brong Ahafo Region on the 5th October, Bantama in Kumasi will be on the 12th whiles Tema will be the 19th."

She added that she is confident the breast screening and health care will go a long way to ensure that the cancer becomes a thing of the past.

She stressed, "There will be a ‘First Pink Gals Concert’ at the National Theatre on 25th October to raise funds for women who are suffering from Breast and Cervical Cancer across the country".

Experts from Lekma Hospital, Cancer Support Network of Ghana and the International Maritime Hospital are expected to partake in the exercise.

Below is a link:

Ken Agyapong is only brave on NET2 TV but actually a coward ...
23 minutes ago