A passage to India in the heart of Paris 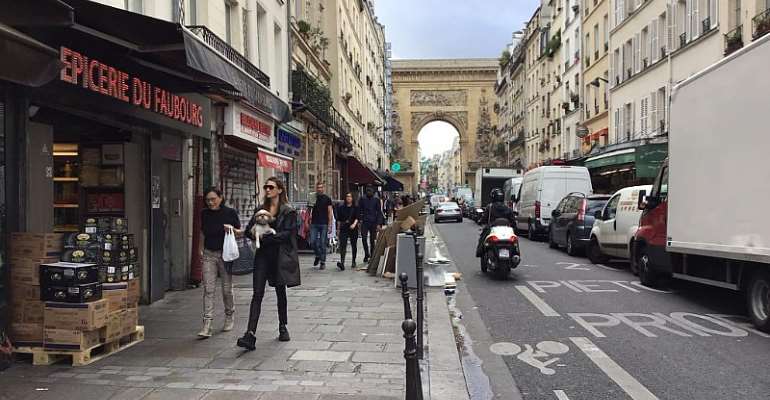 The Porte Saint Denis in central Paris was built in the 17th century in honour of King Louis XIV.

Today, walk through the majestic arch, and you enter a different era.

The Strasbourg Saint-Denis neighbourhood, once disreputable, has become one of Paris's most cosmopolitan (in other words, 'trendy') areas.

A visitor would hardly think oneself in Paris - the energy here is more like what one would expect in East London or in Queens, New York.

People from all cultures amble along, moustached hipsters included. Neighbours gossip, fruit-sellers lazily unload their wares - there is bonhomie in the air.

On the rue du Faubourg Saint-Denis, a telephone shop selling sim cards to foreigners stands next to a popular cafe.

A wine shop is next door, followed by a Turkish soup outlet. Just opposite, a Chinese take-away and Italian pizza place.

Every ten metres, delicious smells waft through the air - Syrian cuisine, Corsican cheese, and even vegan kebabs... at Strasbourg Saint-Denis, the world unravels inside your nostrils...

A passage to India
Walking on, one may nearly miss a little passage at the rue du Faubourg Saint Denis.

The Passage Brady, built in 1828, was designated as a French historical monument in 2002.

Today, it is better known as Paris's 'Little India'.

Inside the passage, both sides are lined with Indian restaurants, spice shops and salons offering Indian beauty treatments.

"Before, I used to work as a cook in a five-star hotel in Delhi.

"A fellow I knew in the hotel worked for Air France. [He] always used [to] run around with a bunch of passports in his hand. Visas to go to France."

Umesh beams.
"Soon, with the right paperwork, I succeeded in obtaining one for myself".

Asked about his years in Passage Brady, Umesh talks about how the area was before.

"Before 2001, this area was dangerous. Prostitution and drugs everywhere.That's all gone now."

As he speaks, a group of tourists is led on a guided tour.

"As you know," the guide explains. "What we call 'Indian' in France is not really from India. Most shops here are owned by people from Pakistan, Bangladesh, Sri Lanka or from Mauritius."

Umesh's eyes sparkle eagerly.
"Look, in Passage Brady - I am the only Indian," he tells RFI

"This is the only true Indian restaurant. The rest of them are Bangladeshis and Pakistanis."

Evidently, in the heart of Paris' trendy and cosmopolitan Strasbourg Saint-Denis area, political divisions and squabbles are not uncommon.

But at the end of the day, the enormous cultural diversity of the neighbourhood makes the little differences seem insignificant.