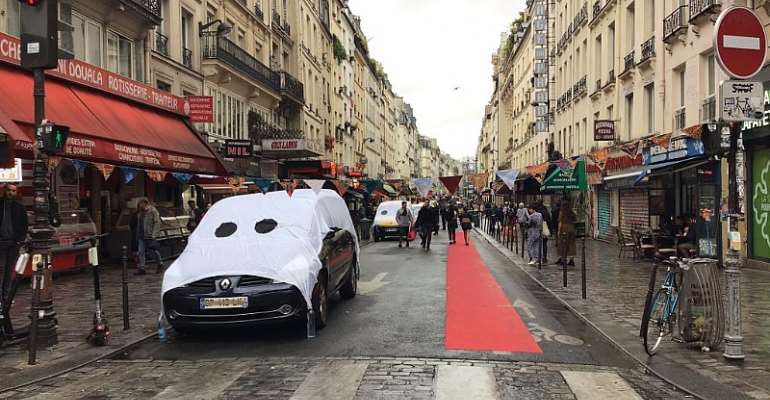 Pedestrians and cyclists have celebrated Paris' annual Car-free Day on a drizzly Sunday in the French capital. This year in its fifth edition, is it just an urban fad or a real scenario for future generations?

The few security agents look distressed. Swamped by a tsunami of insults from motorists, the task of keeping central Paris car-free for a day seems Herculean.

"Some cars just break the barriers and go through," sighs a fraught security agent.

"What can we do? We let them through. We can't risk our lives. But we've taken photographs of their licence plates. You wait and see – we'll go after them!"

As he speaks, a cyclist pedals freely into the no car-zone. He turns around and shows his middle finger to the honking cars.

"This is a day without cars you idiots!" he fumes.
Without cars? Not really
Sunday was advertised as a car-free day in Paris. But in reality, it was a day where only certain zones of the French capital were totally car-free.

In the rest of Paris, public buses, taxis, tourist vehicles and application-based chauffeur services like Uber were up and running.

Only private cars were affected by the event. To many, certain parts of Paris looked like a normal Sunday, a day when private cars are fewer anyway.

In front of the Louvre, it was business as usual. Tourist buses offloading selfie-mad visitors with umbrellas.

Maria and Joaquin, a couple visiting from Barcelona, didn't even know that it was Car-free Day.

"It's important that we use cars as less as possible. But really, the idea is utopic." says Maria. "How can you have no cars in the centre of a city like Paris?"

"Car-drivers must realise that they have the same lungs as us, and breathe the same air," Cathy Lamri, one of the organisers of the event, tells RFI.

"People need to get up in the morning and ask, 'Do I need my car today?' There are so many cars with just one person in them. We want to make politicians take action on this."

A few yards away is the stand for Alternatiba, a citizen's movement against climate change.

"Our campaign is called 'It's our street!'," Alternatiba's Adrienne Pernot du Breuil says.

"In Paris, 50 percent of public space is dedicated to cars, but cars represent only 13 percent of transport used. The main means of transport is walking," claims du Breuil, citing Paris Open Data as a source for the figures.

"We plan to take away cars from big cities and use the space to plant vegetables and promote collective activities."

So what do you do with the cars that are taken away?

"That's my dream and I don't have the answer yet. Cars should only be used when absolutely necessary, for example, for the elderly and the handicapped, or for logistical purposes."

So could the 'Day without cars' concept take off and become an international phenomenon?

If it does, a little less rain could certainly help encourage more motorists to go car-free.