The NDC And Their Obsession With Dr. Bawumia; What Does It Tell Us As Ordinary Ghanaians? 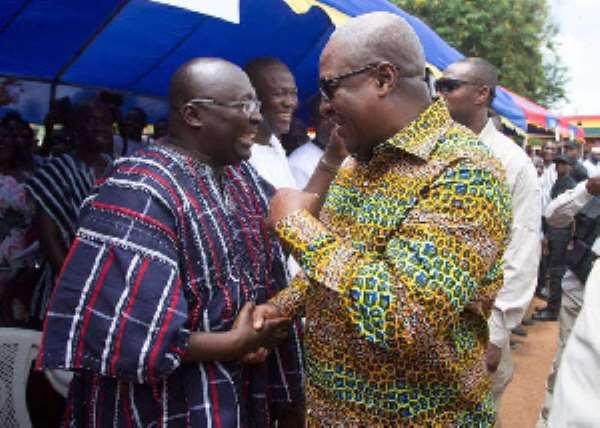 The emergence of Dr. Bawumia in Ghanaian politics has been anything but eventful and meteoric. He reluctantly debuted his political career in 2008 where like Barcelona’s wonder kid Ansu Fati, his talent was glaring for all. How he succeeded in honing his raw talent after a painful defeat and uncomplimentary commentary after extra time to become the maestro that he is today will be the subject matter of another article. For now, I will try to focus on why every plebeian and bourgeoisie of the opposition National Democratic Congress tries to rope in His Excellency Alhaji Dr. Mahamudu Bawumia in every public discourse and by so doing, tries forcefully to discredit him. To deal with the topic, three important questions has to be asked, namely; why is the NDC obsessed with Dr. Bawumia?, is their obsession justified?, and what does such an obsession tell us as Ghanaians?

Why is the NDC obsessed with Vice President Bawumia?

From former President and now flagbearer John Dramani Mahama to Abanga the hoi polloi in NDC, they find it difficult to ‘forgive’ Dr. Bawumia. But one may ask what it is that Dr. Bawumia has done to the NDC that they find it impossible to ‘forgive’ him? The answer is not far-fetched. Beside the appeal of candidate Nana Addo Dankwa Akufo-Addo to the electorate, Dr. Bawumia was the face of the New Patriotic Party in the 2016 which ushered the party to power and the NDC to opposition. Thanks to Dr. Bawumia, Ghanaians actually came to the realization that the then NDC government was truly incompetent, corrupt, greedy and bereft of the innovative ideas that were needed to move this great country of ours from poverty to prosperity. DR. Bawumia backed with indubitable facts every claim he made against the NDC, that even their greatest spinners and propaganda chefs couldn’t cook proper rebuttals. His numerous lectures about the economy of Ghana and the workable solutions he proffered after diagnoses which the NDC stubbornly refused to listen to, were the toast of not only the academia and the middle class but also ordinary citizens, development partners, trade unions and professional associations etc. Dr. Bawumia’s lectures attracted more crowd and attention than the sitting president at the time. The erudite economist was the walking manifesto of the NPP.

The fortunes of the NDC has been dwindling in the Zongos and northern regions of Ghana since the emergence of Dr. Bawumia in Ghana’s politics. We can be sure that thanks to Dr. Bawumia, in 2020 elections NPP will further make gains in these areas which used to be ‘no go areas of NPP’ prior to the advent of Dr. Bawumia. Nothing can placate the NDC for such losses and we cannot expect them to be happy with the man who has orchestrated and continue to orchestrate their political downfall.

It was baffling where the good Dr. Bawumia got his energy from in the run up to the elections. From the beginning of 2015, Dr. Bawumia took the message of “change” to every hamlet, village, town and city and his message reverberated with the masses. He endured terrible road accidents and government machinations to embarrass him, but each hurdle instead of deterring him rather rejuvenated him. Mrs. Samira Bawumia was one of the most vocal ladies on the campaign trail. At one time, it appeared as though Mr. and Mrs. Bawumia had declared a war on the NDC. It is understandable although, that their abhorrence of incompetence and mediocrity will never make them friends of that party.

The NDC is so obsessed with Dr. Bawumia the modern political and economic juggernaut because they know that as he continues to remain credible in the minds of Ghanaians, their vacation in political wilderness will continue unabated. Dr. Bawumia has so much credibility such that not even the experts that the NDC empanelled to investigate his tenure at the Bank of Ghana could uncover any skeleton in his cupboard. Fast forward to his days in government and the NDC is yet to find anything fishy about our unblemished Vice President, not for lack of trying though.

Is NDC obsession with Dr. Bawumia justified?
There isn’t any straightforward answer to this question. If the main purpose of forming political parties is to capture political power, then I must admit that the NDC is justified with their fruitless attacks on the Vice President because like I alluded to earlier, deep down their hearts they know that he is their greatest obstacle to recapturing political power anytime soon. He exposes them like no other does. However, if you also take the fact that the interest of the state supersedes all other considerations, you won’t be wrong to conclude that the NDC is doing a disservice to this country by always trying to pull down the most competent and innovative Vice President this country has ever had. The man is busy with getting the economy back on its feet after they injected it with a deadly dose of their incompetence and mismanagement which sent it to the intensive care unit. But for surgeons Nana Akufo-Addo and Dr. Bawumia, and thanks to the people of Ghana for arriving in time, NDC would have succeeded in sinking this economy. In a nutshell, the NDC’s obsession with Dr. Bawumia cannot be justified because even though admittedly Dr. Bawumia has been throwing deadly jabs at them, those punches are always directed at their incompetence and not to their person. However, the NDC has personalized the punches and are guilty of always hitting below the belt.

What does NDC obsession with Dr. Bawumia tell us as Ghanaians?

Like the gentleman who tries to shake the baobab tree in the village square but end up shaking only his head, the NDC’s calculated attempts at finding mud to throw at the flawless (ever-smiling) Vice President of the Republic will only backfire and hurt them the more. But what inherent message is there for us to take as citizens?

As Ghanaians, we should be proud of our current government. A government that has taken bold decisions to implement its major policies as well as several other initiatives it never promised the people in addition to growing the economy and restoring confidence and pride in the Ghanaian personality. This has all been possible because the President put together a team of competent men and women as Ghana’s Economic Management Team headed by our affable Vice President, Alhaji Dr. Mahamudu Bawumia. Who God bless, no man curse!.