The Biggest Curse Man Has Put On Himself Is Greed 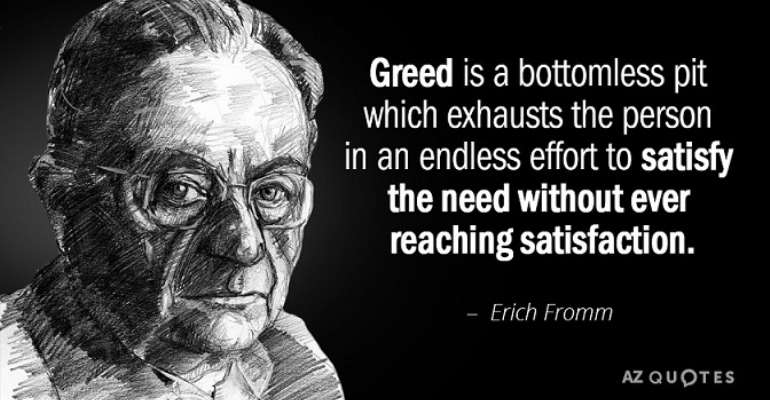 Greed is an overly aggressive desire of a person to get as many as possible all kinds of benefits, both tangible and intangible. It can be about money, food, pleasures, power, information, attention and so on. That selfish or excessive desire to take possession of everything alone exists everywhere, including, homes, working places, and the political arena.

People who are greedy for money, as a rule, are spiritually weak and insecure, since greed, is predominantly stupid and, therefore, cowardly people rowing everything for themselves because of self-doubt in the future. All that a person wants is to have unlimited quantities without thinking of others.

The stories covering greed, its disgracefulness, and embarrassments, continue to make headlines around the globe, including Africa. Instead of highlighting on greedy and corruptible cases which have taken place in Africa or Ghana, I prefer to take two of such stories from the Bible.

Greediness is like digging your own grave, either to fall in it or to bury yourself in it as it happened to King David, Ananias and his wife Sapphira.

David rising from the bed, began to walk on the terrace of the palace and from above, he saw a beautiful woman taking her bath. Despite his many wives, he immediately sent to inquire who that woman was. He was told: "It is Bathsheba, wife of Uriah the Hittite, your faithful soldier."

Then David, not bothering at all that the woman was the wife of a valiant soldier in war, sent messengers to take her. She went to him and he slept with her. When Bathsheba returned home, she realized later that she had conceived and let David know that she was pregnant with him.

Then David, worried, devised a plan that allowed him to exonerate himself from the trouble he had caused, hoping that the betrayal will not be discovered. He sent for Bathsheba's husband, Uriah the Hittite, from the battlefield and invited him home.

The soldier proud of the invitation, immediately rushed to his king and David inquired about the progress of the war, his troops and finally invited him to go home to his wife. He hoped that after the long absence he might miss the 'golden apple' to sleep with his wife.

"Go down to your house and wash your feet," the king ordered. Uriah came out of the palace but did not listen to the king's words. He slept at the door of the palace with all the servants of King David, without sleeping with his wife.

His honesty and loyalty to the law of holy war prevented him from having sexual relations in a time of war. Despite the king's request, he would certainly have felt a coward committing such an abominable act.

Eating, drinking and sleeping in a nice bed, with his beautiful wife, while his soldiers stood in the battlefield? Not at all, he couldn't do that.

When all the plans of King David failed, the next morning, he wrote a letter to Joab, asking him to send to Uriah to the hottest part of the battle. That’s where Uriah’s life came to an end because of David’s greed.

Later, the Lord sent Nathan, the prophet, to tell David a story about two men in the same city, one rich and another poor.

When the story came to an end, David couldn't hide his anger against that man who did that. "For the life of the Lord, whoever did this deserves death! He will pay four times the value of the sheep, for having done such a thing without pity.”

Nathan replied: "You are that man! Thus, says the Lord God of Israel: I have anointed you the king of Israel and delivered you from the hands of Saul, I gave you the house of your master and I put in your arms all the women you desired and more still I would have given you if you had asked me, then why did you despise the word of the Lord, doing what is evil in his eyes?

Yes, because of greed, David killed Uriah the Hittite, to take his wife and he paid bitterly for it.

The second Biblical story about the greed of Ananias and Sapphira

All the believers were together and had everything in common, selling their possessions and goods, they shared with anyone who was in need. With one accord they continued to meet daily in the temple courts and to break bread from house to house, sharing their meals with gladness and sincerity of heart.

But a man named Ananias, with his wife Sapphira, sold a property, and kept part of the money, and delivered the part, placing it at the feet of the apostles. However, Peter said, "Ananias, why has Satan so filled your heart that you lie to the Holy Spirit and keep part of the price of the farm? If this wasn't sold, wasn't it yours? And once sold, the proceeds were not available to you?

Why did you put this into your heart? You have not lied to men but to God. Ananias, hearing these words, fell and died and a great fear ceased all those who heard these things. The young people, standing, wrapped his body, carried him out and buried him.

About three hours later, his wife, not knowing what had happened, entered and Peter, turning to her, said: "Tell me, have you sold the farm for so long?" She replied, "yes, for once." Then Peter asked her: "Why did you agree to test the Spirit of the Lord? Here, the feet of those who have buried your husband are at the door and they will also take you away.”

And at that moment she fell at her feet and died. The young men came in and found her dead; and, having taken her away, they buried her beside her husband. Then great fear came over the whole assembly and all those who heard these things.

These two great Biblical stories about greed are enough for greedy people, including politicians. People queue long hours under the hot sun to vote and after the politicians get what they want, they forget about the promises and neglect them to suffer.

The greedy politicians and those chiefs selling one plot to multiple buyers should change their ways, else all of them will end up like Ananias and his wife Sapphira.