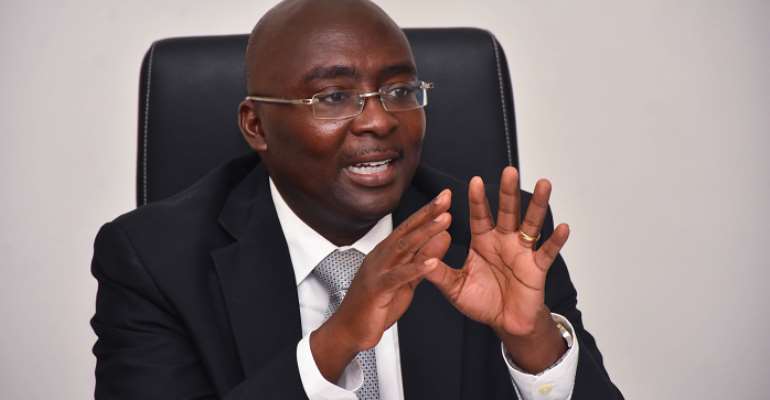 What appears to be good news must be thoroughly and properly analyzed for various reasons.

A new version I personally heard on YouTubeTM yesterday afternoon tells of a different scenario!

It states that contrary to what the Vice-President published on Ghanaweb, it is rather the Ghana government which asked for this help.

If this is true, it would mean that Akufo-Addo's government would have deceived Ghana because the official sources of the government say, we should rely on our own resources and not accept any aid from foreign governments.

We demand an explanation here. The National Democratic Party demand consistency from our government.

The construction of the 42 SHS shall not be funded by the Saudis.

The Saudis practice an extreme form of Islam, that is called Wahhabism.

Does our Vice-President know, what Wahhabis are, what they think about the black race?

What they have done against our race and what their plans are for black people in general?

Does he know about the Salafist Muslims and what they did in Belgium, France, the Netherlands, Germany, and Italy?

Please, make your search on the internet and look up Mollenbeek, Wahhabism, and Salafism for yourself.

In short: Separate institutions like schools, universities, hospitals, and mosques for Muslims, funded by Saudi Wahhabis, led to their separation, isolation, rejection, desperation and deep-seated radicalization and terrorism. Their future is over before it could begin.

If the Vice-President did not know what Wahhabism is, then we are telling him about their Trojan Horse.

What the Vice-President has done is a disservice to the black race and a treasonable offense against the Nation Ghana.

This is the Trojan Horse through which a power-hungry and fundamentalist clergy will de-stabilize and conquer each and every nation it can put their hands on.

the People of Ghana, black people, Africans, have not forgotten the brutal killing of the Saudi journalist Mr. Kashogi in Turkey by agents of the Saudi Wahhabis.

Turkey, the CIA, and others have quite publicly concluded that the Saudi Crown Prince ordered the killing of a fellow Muslim like you. Mr. Kashogi's remains, his head and his limbs and the entire torso were cut into pieces and apparently dissolved in acid in order to deny him a burial so that he shall be lost forever.

You are really asking for help from such a regime?

have you and your party ever heard of the Transatlantic Slave-trade and the atrocities against our people?

You and some of your Muslim friends are leading us into a CALAMITY.

The people of Ghana are mainly Christians. We will always love our Muslim brothers and sisters (or sons and daughters, as the Koran says).

We do not want to be friends of Wahhabis or any other ideology that enslaves and dehumanizes human beings. Such an ideology has no place in our minds and souls.

Mr. Vice-President, we, the majority of Christians do not want to be awarded by Saudi-Arabia; they should take their gifts back.

Do not take Ashantis for a ride! We shall collectively not vote for you. We shall vote for a new party, the NDP, which is an African patriotic party which greets the African Union and rejects Wahhabism. We want to resurrect the PAN-AFRICAN Bandwagon.

HACSA Summit has taken off in Accra with huge attendance. Heritage and Cultural Society of Africa has organized the second summit in Accra with a number of patrons from Africa and Africans in the diaspora.

The NDP shall in the future organize such cultural gatherings from Mexico, Brazil, Colombia, Barbados, Trinidad & Tobago, Jamaica and all those in the diaspora that the Arabs treated as slaves. We greet real Islam as respectful religion, but there should be no foreign and especially no Arab teachings in our schools.

The Separation of Church and State, of Religion and Politics, was neither an easily achieved idea nor an ill-conceived concept. It was born and re-born through hundreds of years of blood and tears and wars and death and destruction.

The Separation of Religion and Politics bars the Church or religious groups from interfering in the day to day politics of the State and likewise bars the State from interference in the matters of Church.

There is no part of the constitution that allows the State to interfere in the decision of an individual to go to the Hajj. Ghana is basically a Christian Nation with a minority of Muslims. The latter has to be respected.

There is no obligation to materially finance the individual private religious activity of any worshipper – especially when this activity (the Hajj) is supposed to be a personal sacrifice.

What the government does is not only interfering with rites of a religion, nullifying the accomplishment of each and every individual Ghanaian Muslim who went on a Hajj before, it also ignores the principle of equal treatment and also discriminates against Christian pilgrims.

What the government must do is to guarantee the freedom of the individual.

It is unacceptable if within Ghanaian society a religious group refuses to (or is being forced to refuse to) integrate or intermarry. You cannot have your cake and eat it.

If you refuse to be examined by another doctor from another faith or denomination, that is your individual private preference. The government however cannot and shall not, however, be asked to treat you differently by putting at your disposal a special doctor for you - at the expense of others.

All men are born equal and our Constitution forbids any form of discrimination. The Muslim community must depend less and less on the Government at the expense of all other communities.

You cannot expect a commonplace of worship but refuse to intermarry.

There is no moral justification for the State to bear the cost of peoples’ personal choices at the expense of the majority.

Something starts to worry me about all this and that is that our brothers from the North are permanently demanding everything from the mother Ghana.

They want their journey to foreign lands to pray to be paid by all people of Ghana,

they demand special doctors to touch and treat their females,

they want to share our teaching institutions with us but expect special medical schools for them alone in their regions to be provided by a powerful external religious body for them alone,

they refuse to have their children married to the rest of us who are not Muslims, but the right to marry our women,

they migrate to the south and virtually occupy our lands because they hold our common nationality, but the southerners are restricted in the pursuit to have the same privileges in the North.

We in the NDP shall strive for Devolution from Ashanti government in Ashanti and admit only the number of Northerners our resources shall be able to sustain.

We shall retrieve our lands in Ashanti again, There shall be justice in Ghana.