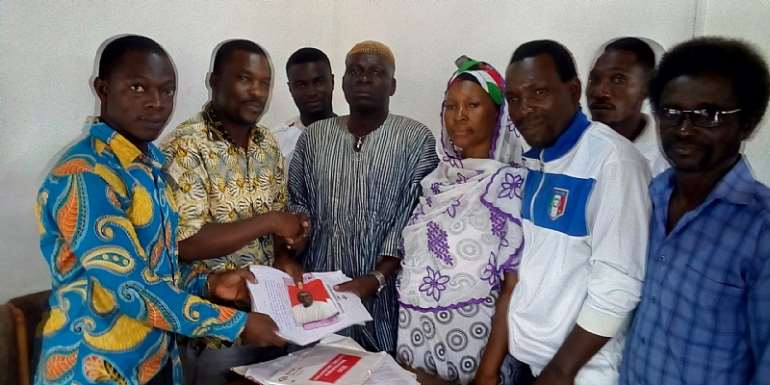 A former Member of Parliament (MP) for Ekumfi constituency, Mr. George Kuntu Blankson has declared his intention to seek for re-election in the upcoming parliamentary primaries of the opposition National Democratic Congress (NDC).

Kuntu Blankson who lost the last parliamentary primaries to the one-term former MP for Ekumfi constituency on the ticket of NDC, Mr. Abeiku Crentsil strongly believed to take back the seat for NDC come 2020 if he gets the mandate to lead the party.

He hinted that Ekumfi constituency seat which had been for the NDC for decades was lost to the incumbent MP, Mr. Francis Kingsley Ato Codjoe in the last presidential and parliamentary elections.

Kuntu Blankson appealed to the delegates to vote massively for him to fight back for Ekumfi seat for NDC to redeem the image of the party.

Mr. Kuntu Blankson made this hint when he stormed Ekumfi constituency office of NDC, together with his supporters to file his nomination forms to contest the upcoming parliamentary primaries.

Kuntu Blankson who held the seat for three terms said he is "coming back because it wasn't people of Ekumfi who rejected me but greedy people within the party who destroyed his name to delegates and that accounted for my lost in the previous elections".

Kuntu Blankson who is contesting with four other contenders charged the delegates not to make any mistakes of electing inexperienced candidate.

"The Kuntu that in coming back is new Kuntu, the past things have gone away and coming with the new vision, new direction, and new united front to take the seat back from NPP" he stated.

"You have somebody who have done it before so you don't need to go and bring somebody to come and do experiments" Kuntu Blankson stated.

Receiving the form on behalf of the party, the Secretary of Ekumfi constituency of NDC, Mr. Edward Acquah Fayah called on all the aspirants to refrain from politics of insults and conduct decent campaign to help the party snatch the seatback.