Lymphatic Filariasis Is Not A Curse But A Medical Problem 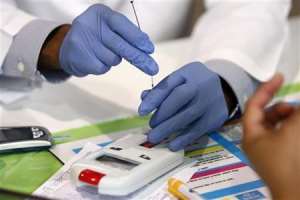 I was very young when I sighted him in the neighbourhood in the 80s, and his lifestyle was extremely weird to me.

Many residents in the neighbourhood avoided Obediaba, he was always seen lonely, but because I was inquisitive, I decided to establish a relationship with him, and keep his company.

It was until I went closer to him that I discovered residents in the neighbourhood were shunning and ducking this company due to his predicament.

Yes, he was suffering from lymphatic filariasis, commonly known in the Ghanaian society as Elephantiasis.

Neighbours regard him as an outcast, believing his sickness was as a result of a trans-generational and family curse.

For Obediaba, 47, life became unfair and uncomfortable at age 12, when he began to experience some signs and reactions of the disease. His was a recurring fever.

He said his parents would then prepare him some herbs to drink which was somehow efficacious to contain the fever for some time, but the sickness kept recurring.

“In fact, I will not blame my parents much for my condition now because they were also ignorant. Because there were mosquitoes around, everybody believed my deteriorating health condition was as a result of serve malaria”, he said

None of the people in his neighbourhood recognise that Obediaba was experiencing early symptoms of elephantiasis.

Unknowingly, he had already been bitten by a female Anopheles mosquito, which carried a parasitic worm and infected him.

But, because his parents could not notice the recurring abnormality in his body, Obediaba is currently left with an enlargement in his right arm, and he goes around begging alms.

Lymphatic Filariasis or elephantiasis is among the 20 infections and parasitic Neglected Tropical Diseases (NTDs) which affect over a billion people worldwide and most of them live in extreme poverty.

Elephantiasis is caused by parasitic worms that are spread through mosquito bites and victim’s skin gets thick and hard, resembling an elephant's skin.

Although medically known as lymphatic filariasis, the term elephantiasis is commonly used because symptoms include swelling and enlargement of the arms and legs.

World Health Organisation (WHO) estimates that 120 million people worldwide are affected by elephantiasis.

Health officials say it’s untrue that elephantiasis is linked to witchcraft, family or trans-generational curse as being perceived and harboured in the Ghanaian society.

Medicine has proven beyond reasonable doubts that with early detection and strict adherence to the course of drugs, lymphatic filariasis can be treated.

According to the Ghana Health Service (GHS), the societal myth surrounding the disease was contributing to high stigma and subsequently impeding Ghana’s efforts to eradicate it.

Dr. Benjamin Kofi Marfo, the Programmes Manager for the NTDs, recommended intensified public education to break the silence, to make people understand the disease remained a health problem that could be treated and managed, but not a curse.

Speaking at the 2019 national launch of the Mass Drug Administration against NTDs in Sunyani, Dr Marfo regretted because lymphatic filariasis remained endemic, the country would be unable to eradicate NTDs by 2020.

The WHO requires that all NTDs are eradicated by 2020 worldwide, but the situation is worrying because research shows that many people in Ghana suffering from elephantiasis hide and refuse d to seek medication because of the high stigma attached to the disease.

Research proves that most people who are infected will sometimes not show symptoms, despite damage to the lymph system and kidneys.

But, those who do get symptoms most commonly experience swelling of the legs, arms, breasts and genitals

People with elephantiasis will have impaired immune function because of damage to their lymph system.

They tend to get more bacterial infections of the skin, causing it to become dry, thick, and ulcerated with repeated infections.

How does the disease spread?

Mosquitoes are responsible for spreading the parasites that cause elephantiasis.

Firstly, mosquitoes become infected with roundworm larvae when they take a blood meal from an infected human, it then bites someone else, passing the larvae into their bloodstream.

Finally, the worm larvae migrate to the lymphatic via the bloodstream and mature in the lymph system.

Elephantiasis can affect anyone who is exposed to the parasites that cause the disease and the risk of exposure is greatest for people who live long-term in tropical and subtropical regions, are regularly bitten by mosquitoes and live in unhygienic conditions.

Elephantiasis is associated with several physical and emotional complications including poverty, disability and emotional stress as the condition cause most people to worry about their appearance, which leads to anxiety and depression.

Dr Marfo, therefore, called for a concerted approach to help for the early detection of the diseases to put patients on medication.

He emphasized that the GHS was determined to eradicate the NTDs at least by 2025, and called for concerted efforts among all stakeholders in the health sector to achieve the target.

Dr. Yao Yeboah, the Chairman of the GHS Governing Council, also emphasised that multi-sectoral approach was required between GHS, traditional authorities, civil society actors, development partners and all stakeholders to eradicate the NTDs in the endemic areas.

He stressed the need to also improve on engagements among all stakeholders, intensify community education and sensitisation, enhance training and motivate community volunteers in the fight against the NTDs.

As a neglected disease, the writer believes the GHS alone cannot shoulder the responsibility towards eradicating NTDs in general and all Ghanaians must become citizens, and not spectators to help eliminate it.