Seismologists warn California likely to be shaken up by more earthquakes 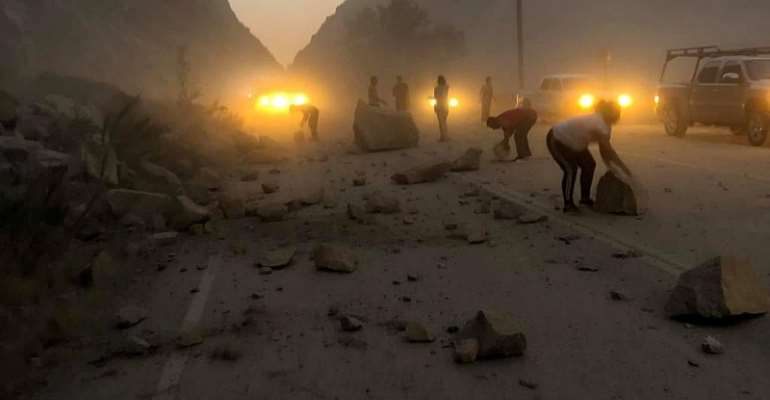 Friday's earthquake struck at 8:19 pm and was centred 18 kilometers from Ridgecrest, just north of Los Angeles, in the same areas where a previous one had just hit.

Another quake measuring 6.4 had hit the Mojave Desert on Thursday.

The 7.1 quake is being considered the largest in Southern California in at least 20 years and is being followed by a series of large and small aftershocks including a few above 5.0 on the Richter scale.

It was felt as far north as Sacramento and as far east as Las Vegas and as far south as Mexico.

People were still recovering from Thursday's tremor when Friday's came along leaving several thousand people without power and reports of cracked buildings.

More to come?
Lucy Jones, a seismologist at the California Institute of Technology and former science advisor at the US Geological Survey says it's not smooth sailing from here on; there is still a 1-in-10 chance that another 7.0 earthquake could hit within the next week.

And the chance of a 5.0 quake “is approaching certainty” she told Associated Press.

On the plus side, the earthquake is unlikely to affect fault lines outside of the area, in particular the San Andreas Fault that is far away noted the seismologist.

Damage
In Ridgecrest, two building fires and several reports of natural gas leaks were reported but the fires have since been put out and the gas lines shut off said Ridgecrest Police Chief Jed McLaughlin.

In downtown Los Angeles, offices in skyscrapers swayed for at least 30 seconds.

In the small town of Trona, near Ridgecrest, several homes were knocked off their foundations and buildings were cracked, but only minor injuries were reported say officials.

Public warning
The West Coast of the United States and Canada have always known that the “Big One” could hit at some moment.

In fact, this week a series of earthquakes were also noted off the west coast of Canada's British Colombia on Wednesday in the lead-up to Thursday's and Friday's Southern California's quakes.

Jones notes that it's wishful thinking to think that after suffering an earthquake, the worst is over.

In fact, the opposite is true; it often increases the risk of future quakes.

For years, experts continue to warn that the region is due for a major earthquake potentially reaching a magnitude of 9.0, killing thousands and potentially causing waves of up to 20 metres high.

Scientists at the California Institute of Technology seismology lab received a warning 48 seconds before hit; so no public notification was triggered.

California is partnering with the federal government to build a statewide earthquake warning system, with the goal of turning it on by June 2021.

The state has already spent at least $25 million building it, including installing hundreds of seismic stations throughout the state.

This summer's seismic activity is eerily similar to that of last summer when Indonesia was hit by a cluster of deadly earthquakes beginning in July and culminating in August in Lombok.