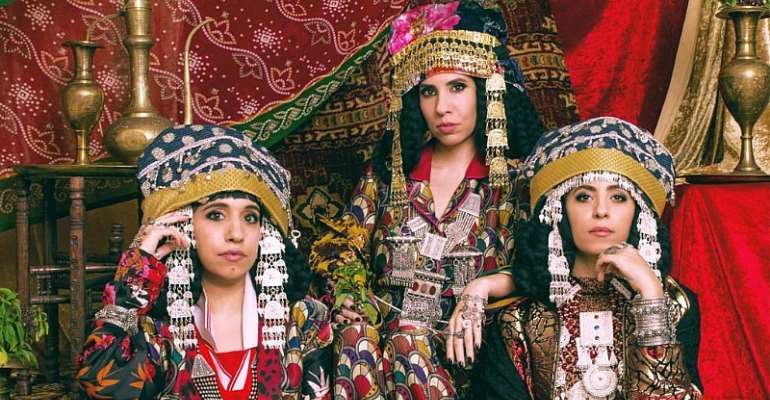 A-Wa sing electronic-infused versions of Yemenite folk songs in Arabic. They proudly defend their Israeli Yemenite identity on their second album Bayti Fi Rasi, inspired by the story of their great-grandmother Rachel, a Jewish refugee brought from Yemen to Israel in 1949 as part of Operation Magic Carpet.

Tair, Liron and Tagel Haim came to fame with their 2016 debut album, Habib Galbi, on which they set traditional Yemenite songs to pulsating electro beats.

But Bayti Fi Rasi is a 14-track album of original compositions, based on the life and times of their great-grandmother, Rachel.

"On this new album Bayti Fi Rasi we talk about the notion of home and is life a matter of luck or fate," says Tair, the eldest of the three sisters, as they prepare to perform at Paris's Café de la Danse. "These are the themes and issues that our great-grandma Rachel dealt with.

As a Jew and a single mother, Rachel suffered discrimination and wasn't allowed an education.

"She didn't know how to read and write, she couldn't express herself freely," Tair continues, "this is why we care about letting her voice be heard. It's really important for us in this album."

"We really felt she was present in the studio," says Liron, "it was very challenging and emotional to blend our voices with her voice."

On the video for the song Mudbira (a colloquial word for unlucky or miserable) A-Wa dress up as fiesty shepherdesses, delivering a strong feminist message to men who might dare to mess around with their goats.

Rachel's problems continued once she arrived in Israel in 1949, along with some 49,000 other Yemenite Jews.

"Where will I stake a home? You have a tent for now. Or at least a small shack. Along with four other families," A-Wa sing on Hana Mash Al Yaman (Here is not home).

"They were placed in tent camps, they couldn't work and had to use coupons for food," Tair explains. "The country was young and couldn't include everyone. It was sort of a mess."

"And you can't really disconnect the person from his or homeland and culture," Tagel adds.

Pride in Mizrahi culture
A-Wa are proud of their heritage but resolutely anchored in the present, mashing up traditional Yemenite headdress and costumes with sneakers.

They feel much more at ease with their Mizrahi culture in Israel than their great grandmother did.

"We want to bring the glory back to our culture," says Tagel. "The generation before us felt a bit ashamed but we feel it's so beautiful we have to celebrate it. Our generation is way more curious, really going back and digging in the roots and bringing to the front."

"People are more accepting now and more open for this kind of music," says Tair, "and the fact that we blend it with hip hop and more modern styles [means] it's very danceable and it's more accessible to all people.

"I guess the A-Wa experience now, we're beoming more and more mainstream in Israel and it's a blessing."