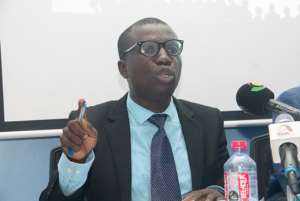 CUTS Ghana, a research and advocacy policy think tank is calling on the government as a matter of urgency to prosecute all the Oil Marketing Companies (OMCs) found defrauding consumers by adjusting their fuel pumps to serve their customers less than what they have paid for.

Addressing a cross section of the press, the Country Director for CUTS Ghana, Mr. Appiah Kusi Adomako said it was about time all the Oil Marketing Distribution Companies (OMCs) involved in such illegal and malicious activities be made to face the full rigor of justice to serve as a deterrent for others.

“The acts of these filling stations are tantamount to theft which is a criminal offense which cannot be settled by imposing a fine. The criminal procedure Code (Act 30) of 1960 is clear on what needs to be done in such a case. By treating a criminal offence as a civil offense is not the best for the country.”

Criminal acts are prosecuted by the Attorney General Department on behalf of the state and it is important for the Ghana Police Service and the Ghana Standards Authority establish a prima facie case against these companies. The matter should not be allowed to rest at the jurisdiction of Ghana Standards Authority alone. The law is clear on what needs to be done in this situation.

If we were to compute how much these stations have been ripping consumers who buy fuel from them, it would shock the nation. The fact that it would be difficult to compensate consumers who have been fleeced by these nefarious acts should not mean that the fines should not be imposed on them. At least the fines can server two purposes. First, it has a deterrent effect and second, using the fund to pay for medical bills of uninsured road accident victims.

CUTS Ghana is worried that all the OMCs care about is to make profit illegally at the expense of their loyal customers.

CUTS Ghana calls on Parliament to expedite the passage of the Consumer Protection Law to empower consumers the right to bring actions in a similar situation.

CUTS Ghana commended the Ghana Standard Authority (GSA) for undertaking these unannounced exercises and called for the exercise to be replicated in other parts of the country.