IMF, World Bank Are Not The Solution To Liberia’s Socio-Economic Problems 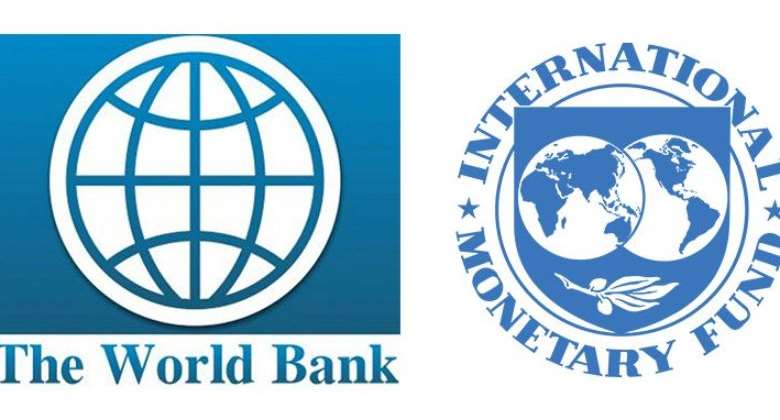 The International Monetary Fund (IMF) and the World Bank cannot help Liberia; only good leadership, sound policies and a change of attitude from all Liberians will make Liberia a better place to live, work and do business.

Like the World Bank, the IMF is a respected global institution because of its founding and current membership, sponsors and physical location. While the IMF oversees the stability of the world's monetary system, the World Bank's goal is to “reduce” poverty by offering support to middle-income and low-income countries. Both institutions are based in Washington, D.C. (the center of global power), and were instituted as part of the Bretton Woods Agreement in 1945 right after the Second World War which lasted from 1939 - 1945. However, these facts in no way suggest that the IMF and the World Bank are flawless or accurate in most of their activities, estimations, projections, utterances, publications and impacts.

For example, the IMF recently announced that Liberia should expect a worsening economic condition in the next year or two if nothing is done fast to address the gaps. This prediction or projection is not data-driven. Liberia and a number of African countries have no legitimate economic data or a process thereof. Data collected and used in Liberia by most, if not all, international organizations has a hundred percent absolute margin of error since they are not grounded in any scientific survey of any sort. So what drives the IMF’s recent conclusions about the Liberian economy? Perhaps, perceptions of political and social events in Liberia. But again, the IMF cannot and should not make an economic forecast based on mere political and social events. So why are Liberians jumping up and down because the IMF has made an unsubstantiated and unscientific pronouncement about the country’s economy based on a no-data driven analysis?

Some of the purposeful criticisms of the IMF include the fact that in granting a loan to poor countries, the institution makes the loan conditional on the implementation of certain economic policies. These policies tend to involve: reducing government borrowing – higher taxes and lower spending. In fact, the World Bank and the IMF would not admit that their policies can be an additional headache in some instances, which is also another serious problem.

Furthermore, the IMF has repeatedly refused to change its priorities and let go of its outdated conditions of privatization, deregulation of markets, and "austerity" in social services which, many experts believe, in the past have provoked human rights violations, and instead make loans subject to a new set of conditions.

Over and again, history and practical experience show that the IMF has not only undermined but also ruined and /or exacerbated the problems of the most struggling economies, especially those of African countries, through their ready-made policy prescriptions, its model as well as the model of the World Bank were mainly set up during the end of the Second World War to rebuild the economies of Europe. Meaning these institutions initial and underlying principles and policy alignments were not intended for Africa even though globalization necessitate that they deal with the African continent. They now do so not because they want to, but because they have to considering that Africa plays an invaluable role in the global economy. Yet, both institutions remain defiant against adjusting their strategies, guidelines and overall philosophy.

It is because of this and other reasons that the IMF has often punished the poor in poorly performing and economically volatile African nations whenever it imposes its ready-made sanctions under the guise of monetary and fiscal policies.

Consequently, the belief that the intervention of the IMF, the World Bank and whatever international organization will change Liberia for the better is a fallacy and a waste of time. Of course, these global institutions can and will help any country in need of life-support because of bad governance and poor economic management, the best they can do is to provide provisional relief and perhaps minimum development support. So the news and gratification that when the IMF policies and programs are implemented in Liberia it means manna will fall from Heaven is amusing, at best. This will not happen! Things will get worse and Liberia will stay unchanged if Liberians continue to remain in their set ways as well as display their self-destructive, self-pity and lack of patriotism attitude.

Liberia’s current problems can easily be solved when Liberians collectively agree to establish new innovative and strategic entities as well as strengthen the country’s existing legal, democratic, economic, social and political institutions such that there is an absolute application of the rule of law, accountability, transparency, and a merit-based competition system.

Although many people believe the IMF’s ready-made prescription will be the salvation for Liberia’s current meltdown, it might end up hurting the already poor segment of the Liberian population. It is time President Weah and the CDC-led administration realize that nothing the IMF and the World Bank can do differently when everything as is in Liberia remains the same. If the President is really serious and wants a real solid presidential and leadership legacy and a better country, he must act. Act fast and now!

Instead of banking on the IMF and the World Bank, the Liberian government needs to create private sector jobs, support innovation and be transparent and accountable in its activities. Every government agency and heads of agencies must have bi-weekly, monthly and quarterly deliverables that aim at making Liberia a better place to live, work and do business. Liberians need concrete deliverables from the agricultural sector, tourism and hospitality sector, communications and the information technology sector, healthcare sector, educational sector, infrastructural and housing sector, trade and commerce sector, services sector, workforce development and innovation sector, professional services sector, and of course from the overall public policy domain, and the legislative sphere.

Job creation and entrepreneurship are important in solving Liberia’s socio-economic problems because the stability of any economy rests on the ability to maintain a low unemployment rate and provide a safe, secure workplace. Liberians need to be put to work. One of the most important aspects of work is that it provides a person with the income necessary to meet basic living needs. And according to several types of research, having work also gives people a sense of identity and a feeling of accomplishing activities that contribute to society.

Acclaimed economists, policymakers, social scientists and others have all acknowledged that jobs are important for several reasons: jobs provide workers with the personal feelings of self-worth and satisfaction, and produce revenue for families, communities and the government, which in turn encourages spending and stimulates the larger economy. Besides, having a job is an important part of people’s lives. It means more than just getting paid. It means being able to make your own choices about how you want to live your life.

To create jobs and improve Liberia’s workforce and the labor market would require having sound policies, innovative advisement, and efficient managers. Without these, a mere reliance on the intervention of the IMF and the World Bank would not solve Liberia’s deep-seated and troubling socio-economic dangers.

Because job creation is so important, almost every U.S. president, a lawmaker, and state governor makes that a non-partisan pre-occupation and priority. For example, President Bill Clinton created 18.6 million jobs during his two terms in office. That was the most number of jobs of any U.S. president . The greatest jobs producer president by percent was President Franklin D. Roosevelt. Even though Roosevelt only added 9.6 million new positions, it was a 21.5 percent increase in the total jobs created.

That said, let us analyze the importance of employment in details:

1. Employment is important for economic development and social stability;

2. Social development is the result of employment;
3. Employment reduces the level of corruption and crime in a system and in society.

4. Employment is a vital unit of poverty alleviation;

5. Employment empowers women and girls and prevents or reduces prostitution and abuse;

6. Employment gives people and communities a voice and enables them to become full participants of their governance and democratic process;

7. Employment leads to a secure retirement; and
8. Only employment can stop people from becoming such a thing as a protester, rogue, armed robber, or even terrorist.

It is also not just important that jobs are created, but that the jobs created are sustainable for the foreseeable future. This is why creating duplicate and unnecessary jobs or positions in any government is counter-productive to economic viability. As we can see, the heavy burden on the current Liberian government is largely imposed by the government’s unnecessary wage bill.

For the Weah administration to succeed and if the CDC government means business, the President and the administration need to put partisanship and unhelpful politics aside and focus on delivering for the Liberian people by supporting private sector entrepreneurship among Liberians in all fields and industry sectors. This would require facilitating an open, transparent, enabling and friendly business climate as well as removing all roadblocks to new ideas and entrepreneurship.

Entrepreneurship is vital to the small business establishment because small businesses are often called the backbone of any economy. Policies that therefore encourage the growth of small businesses and facilitate the role of entrepreneurship and innovation in the labor and investment market are considered to be healthy for the economy at large. Moreover, entrepreneurs create new businesses in the form of new goods and services. This, in turn, can produce a cascading effect by stimulating related businesses or sectors supporting the new venture, furthering economic development.

For example, a few innovations and IT companies established the Indian IT industry in the 1990s while serving as a programmers' hub. Thereafter, the IT industry in India gathered pace in its own programmers’ domain. But more importantly, millions from other sectors benefited from it. (For more, see: Top Indian Billionaires And How They Made Their Money .)

Finally, no amount of IMF’s doctrine and the World Bank’s fat check can save Liberia from its economic and social vulnerabilities or those of any country in Africa. President Weah and the CDC-led administration, irrespective of political affiliation, friendship, personal loyalty, etc., must seek the help of other Liberians who have the required capabilities, experience, creativity, and competence. President Paul Kagame has and continues to do this in Rwanda without the IMF and the World Bank and see where his country is. President Weah and the CDC-led administration should follow the footsteps of President Paul Kagame and the Rwandan government.

He can be reached at [email protected] .