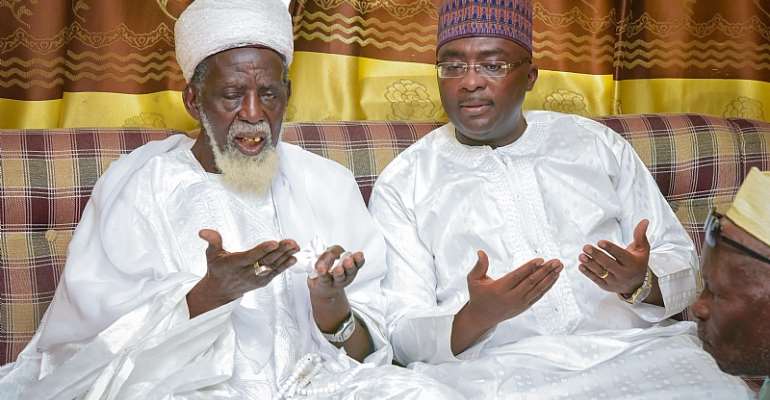 Greetings from Binduri. The good Bible has this to say in the books of Ecclesiastes:

Ghana's economy under your so-called competent management is now as thin as an orphan fed grudgingly by a cruel foster-mother, and you have deliberately refused to comment on it. In fact, the ever boastful economic wizard is so scared in the midst of our economic terrorism. The last time I saw you on TV was during the maiden 6th March independence celebration in Tamale, and I must confess you looked like 'a charismatic zoo keeper'.

No too long after that, I heard you were in Aboabo in Kumasi throwing tantrums in the midst of the citizens cry against vigilantism, corruption and economic hardships that we need 'Joblantes' instead. Indeed you are right just that you forgot to add that Ghanaians want their Vice President, who doubles as the Head of the economic management team to be an economy-lante, a cedi-lante and a 'depreciatilante' and not just a stealing-lante and talking-lante. I believe the tribal bigot Osafo Marfo was frustrated by your ineptitude so much so that he had to call you allegedly A LAZY VICE PRESIDENT!

Dr. Bawumia, the Ghana Cedi has in your own words notoriously gained the reputation of being the worst currency in Africa and the world. In fact, the Naira, and CFA which used not to come close to the Ghana cedi is now rubbing shoulders with the Cedi. As for the major trading currencies like the US dollar, British pounds sterling, and Euro, I dare say they have a mind of their own, and only they can explain the supersonic gap they have given to our Ghana Cedi placed under your care. The dollar I prophesy will end the year at $1: GHc7.

Should we take the keys that you locked the dollar with from the IGP and hand it over to DSP Azugu? At least he will wear some mask to blindfold the dollar from biting the Cedi like mosquitoes. I understand your invisible forces are now ‘jobilantes’ in National Security.

A gallon of petrol is now exceeding GHc26.00, almighty ECG has now been privatized against your stance whilst in opposition to PDS, Dumsor is back like Kaikai, importers are going through hell, spare parts dealers are in limbo, the ordinary Ghanaian’s hope of getting 3 meals a day is now a mirage.

These unfortunate bizarre occurrences come at a time Ghana has the greatest economic wizard ever as her vice president. A man who had every prescription for a healthy economy not too long ago. A man who claimed he has arrested the dollar in his first 100 days in office, locked it in prison and handed over the keys to the IGP, maybe you arrested the wrong dollar and we may need another Short committee to establish that.

Not knowing that you were merely a watchman. Your power is no more than the power of a child over a goat that was said to be his; he would find its food and take care of it. But the day it was slaughtered he would know soon enough who the real owner is? I heard your EMT members have passed a vote of no confidence in you. They call you a lazy EMT Chairman. For that matter, Paul Acquah has replaced you. Senior inflation-lante can you confirm it?

What kind of economic competence have you when you can't even manage a common fluctuating currency? It's better you admit at this juncture that you are clueless and beg for help since your economic management prowess is no more than the power in the anus of the proud dog who sought to put out a furnace with his puny fart...

Dr. Bawumia, Ghanaians also wish to know how far with the 170 economic questions you posed a few years ago, can we know and implement the answers? Or is it now the case that the great medicine man is now afraid to test the potency of his own medicine? Former President John Dramani Mahama admonished you then to be circumspect in your badmouth commentary of his government because you don't know what it takes to be a President, an advise you treated regrettably with childish scorn. Now that all is said and done and the frog is finally dead do you now see the full scale of its length?

At this juncture, do you recall the applause you received at the numerous needless press conferences and deceptive economic lectures you organized for propaganda? And don't you at this juncture wish you never mocked the intellect of those who came before you? Don't you think you should eat the humble pie and return Mr. Mahama's stone to him? Or you still want to remain boastful and unrepentant in the midst of your uselessness?

The man who has never submitted to anything will soon submit to the burial mat! Anyway, we don't blame a vulture for perching over carcass!!! The ever forgiving Mr. Mahama has challenged you to seek advice, will you heed to his counsel? Seeking for advice now is the best way for your political survival though Ofori Atta is lurking in your shadows. For to neglect, it could become the first step on the slippery gradient of ever profound repudiations.

Before I depart please ponder over one of your medicines below. May be you can redefine it for some magical turn aorund...

“In an open economy with market determination of prices, exchange rate movements ARE THE MOST IMPORTANT INDICATORS THAT UNDERLINE MACRO ECONOMIC FUNDAMENTALS, as the saying goes when in doubt observe the exchange rate. The lesson from history for Governments is that you cannot manage the economy with propaganda. In fact, you can engage in all the propaganda you want but if THE FUNDAMENTALS ARE WEAK THE EXCHANGE RATE WILL EXPOSE YOU. The type of free fall that we are seeing with the cedi exchange rate is a vote of no confidence by market players in the management of the economy”

I wish you well Mr. Economy-lante.