The Creation Of New Regions 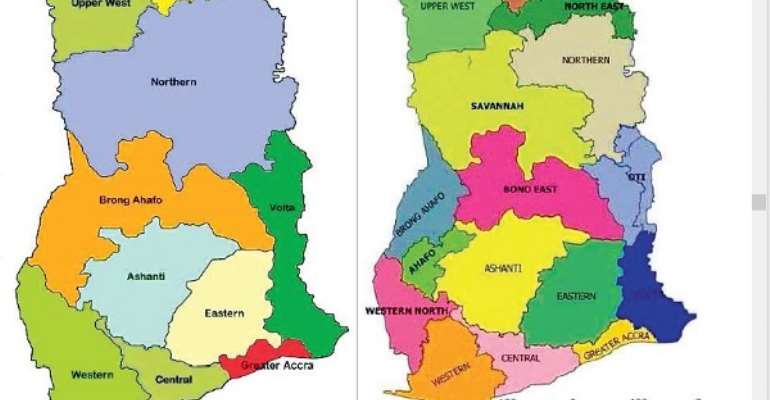 The call for the further division of some regions of the country was not as strong as in the last few years.

The incessant demand for the creation of new regions was highlighted when the chiefs and opinion leaders from Western, Northern, Volta and Brong Ahafo Regions made this part of their demands during the last election campaign.

Although the demand was met with criticism, historical antecedents that underpin the creation of regions in Ghana showed it was lawful as the country's regional restructuring had not been static but dynamic.

For instance, in 1952, the Western and Eastern Regions were created, which brought the total number of regions to four, the Plebiscite of 1956 ensured that Trans-Volta became the country's fifth region.

After independence, Kwame Nkrumah's CPP government also created Brong Ahafo and the Central Regions. Again, they created the Upper Region out of the Northern, moving the number of regions in the country from three to eight regions by the mid-60s.

Thus, when President Akufo-Addo, through the Minister of Regional Integration, Dan Kwaku Botwe, received a petition from the chiefs and opinion leaders for the creation of new regions, he did what is constitutionally right by referring it to the Council of State for approval or otherwise.

After studying the report submitted, the Council of State gave its approval for the creation of six new regions out of four, where petitions have come from to extend development at the grassroots.

“The Council of State received my request and their advice was positive. They agreed that there was a demand for the creation of new regions from the Western Region, Northern Region, Brong Ahafo Region and Volta Region,” he said.

The regions were likely to come from Western, where Western North is expected to be created; Brong-Ahafo where two new regions – Bono East and Ahafo – were expected. The Northern Region was also to see two more regions – Savanna and North East; while Oti Region was to be created from the Volta Region.

“A major underlying factor for the proposed creation was to take into account developments, population growth, the need to improve the quality of governance and take it closer and closer to the people,” President Akufo-Addo stated during his three-day tour of the Northern Region.

Currently, Ghana is divided into 10 regions, 275 electoral constituencies and 216 districts. The 1992 Constitution stipulates that any decision to create additional regions in Ghana must ultimately be decided by the people through a referendum after approval from the Council of state.

President Akufo-Addo continued, “The Constitution states that once the Council of State has given a positive response to the president, the president would have to establish a commission of enquiry to go into the areas which have requested the creation to see whether, indeed, there is a substantial demand.

“Next week, I am going to establish a commission of enquiry to examine the petitions for the creation of the regions,” he disclosed.

President Akufo-Addo has set up a commission of enquiry to consider calls for the creation of new regions and has recommended the creation of four more regions out of the existing 10.

The nine-member commission, led by Justice Brobbey, was tasked two years ago to solicit views of people in the areas where proposals for the creation of new regions have been made.

The presidential enquiry submitted its report to the president late last year backing the petitions to create the Western North, Oti, Savanah and Brong East Regions from existing ones.

However, for the regions to be created, the 50 per cent of residents in the proposed areas where the regions are to be created would have to vote with 80 percent of the people voting 'Yes' in a referendum.

Results of the December 27th referendum conducted by the Electoral Commission (EC) showed that the requirements – 50 per cent of registered voters voting and 80 per cent of the valid voters voting 'Yes' – which makes the results valid was met in all the regions.

However, as the country awaits the CI, there is already competition within the newly created regions over the siting of the regional capitals following the successful referendum.

It is turning out that after uniting to rally their people to campaign massively for a 'Yes' vote for the new regions, the respective chiefs and traditional leaders are the ones leading the lobbying.

Western Regional Minister, Dr. Kwaku Afriyie, indicated later that even though discussions had been held over the siting of the regional capital, he was not in the position to declare it now.

Coordinator of the Western North Secretariat, Lt. Col. Anthony Aduhene (Rtd), remarked that “we are happy that at long last, we have our own region and hoping for accelerated development.”

“We intend to call for a meeting of the chiefs and all stakeholders to discuss where the regional capital should be sited,” he added.

But residents of Sefwi Wiawso and Bibiani have started lobbying for the capital to be sited in their respective towns.

Big towns in the newly created Bono East and Ahafo Regions are 'fighting' to get their towns to be made regional capitals.

For Bono East, Techiman in the Techiman Municipality, Kintampo in the Kintampo Municipality, as well as Atebubu in the Atebubu Amantin Municipality, are in a tussle for the regional capital. It appears Techiman may have the advantage due to the level of infrastructure for the take off of the new region.

The Oti Region has seen one of the most intense lobbying for a regional capital. Nkwanta, Jasikan, Kadjebi, Krachi and Dambai are all clamouring for the regional capitals, and the powerful chiefs in the respective areas are not leaving any stone unturned

It is a straight fight for the Northern Regions, with Damongo and Salaga vying for the Savannah Region and Walewale, Nalerigu and Gambaga for the North-East Region.