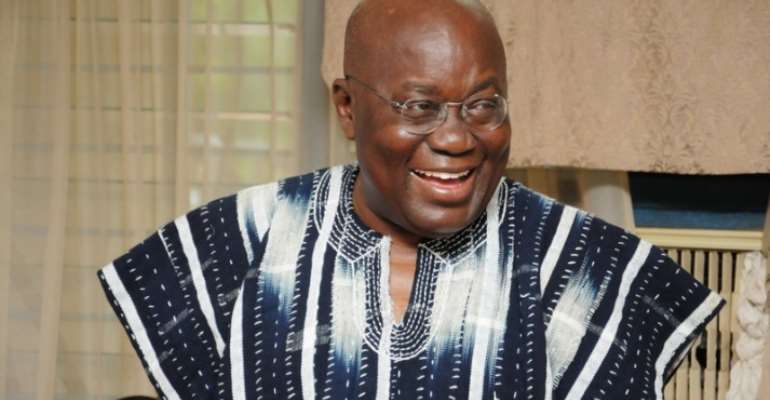 And I wake up to the grotesque news that the Nana Addo led government has finally rewritten our enviable history. The attempt by Nana Addo to rewrite our history to redeem the image of his ancestors didn't begin today, but he was not in the position to effect his nefarious agenda. He has now used his power to scrap Founder's Day to pave way for Founders' Day (which is alien to every fan of history) and the much important Republic Day. How do you celebrate Independence Day and abolish Republic Day? Didn't our Republican status open the door for the main event: Independence?

The President should realize that being president is not synonymous to owning Ghana where he can do anything he desires.

The President, Nana Addo, cannot pretend not to know the history of this country to be making such unfounded and 'unhistorical' antics.

If this is a subtle attempt to rewrite the Ghanaian history, this attempt cannot stand the test of time.

This whole desire to make JB Danquah Nkrumah's coequal in terms of the fight against imperialism, foreign rule and the struggle for the Black emancipation is an exercise in futility because the facts and figures are documented.

The President (Nana Addo) and his people believe JB Danquah formed the UGCC for the emancipation from colonial hegemonic rule.

This thinking is not only a distortion of history, it is also a thought demonstrated by a lack of respect for the Ghanaian history.

It is imperative we do some history here; in order that we appreciate the gross abuse of incumbency by Nana Addo, the President.

It is on record that, it was George Paa Grant who single-handedly formed the UGCC and invited JB Danquah, Arko Agyei and people like RS Blay and William Awoonor.

He sponsored their (JB Danquah and Co) transportation cost and sitting allowance with his own money and resources whenever they went for UGCC meetings.

Paa Grant, later on, needed to transform the party from the docile state to a mass movement to accelerate the pace and impetus for the struggle for independence from foreign rule and domination.

For this reason, Paa Grant ordered that Kwame Nkrumah be invited upon the recommendation of Arko Adjei. It is instructive to know that Arko Adjei refused the portfolio as the General Secretary and recommended Nkrumah to Paa Grant, because in his estimation, Nkrumah qualified for the position as the General Secretary, owing to his record of activism. Thereafter, Nkrumah became the General Secretary to the UGCC on 10th December 1947. When Nkrumah assumed the position, he brought on board, the Women's Wing, the Youth Wing, the Students' Wing, the Chiefs, the Farmers, the Market Women etc to transform the UGCC which was only an elitists' tea club to a mass movement to accelerate the pace for the struggle for emancipation.

Therefore, JB Danquah, Kwame Nkrumah and others were all invited by George Paa Grant who used his own resources and money to fund the party. JB Danquah didn't form the UGCC.

It is important to note that, Nkrumah broke away from the UGCC to form his own CPP because of the backward thinking attitude of JB Danquah and co. Nkrumah realised that JB Danquah and co. have already had what they wanted (money, education, popularity) and were reluctant in the fight against imperialism. In fact, JB Danquah and co. reneged.

This bizarre imposition of JB Danquah on Ghanaians led a prominent Chief of Akyem Abuakwa to say that the Premier University of Ghana-Legon should be named after JB Danquah and H.E Nana Addo is on record to have repeated the same thing. This statement from the said Chief and H.E Nana Addo could only come out from them as a result of a clear demonstration of lack of respect for history.

Again, let's do some history here; when Nkrumah won the first general election in 1951, his Internal "Self Rule government" instituted the Local Council Ordinance Bill and the Cocoa Marketing Board.

However, it was the LCOB and the CMB which provided the needed and required revenue and resourses to achieve Nkrumah's first five-year development plan which included the construction of the University of Ghana-Legon, the Volta River Project, Tema Habour and City, the Adomi Bridge, the Komfo Anokye Hospital, the Democratization of Education and the Medical School.

You would recall that when the Big Six were arrested and detained after the Riot of 1948 that was sparked by the open assassination of Sergeant Adjetey, Sergeant Attipoe and Private Lamptey, when it mattered the most, five of the Big Six including JB Danquah told the imperialists that they knew nothing about the Riot of 1948. In fact, they blamed it on Nkrumah.

It was only Osagyefo Kwame Nkrumah who stood by his conviction and defended the Riot by pointing out to them that it was illegal to kill those Ex-Servicemen who were peacefully asking for what was promised to them before they fought in the World War II. He believed in the Riot because he had the conviction that it was in solidarity to those innocent Ex-Service Men who were shot and killed by heart. So he said, he had nothing to do with the riot, in fact he was not even around at the time, but if he were there, he would certainly be part of the riot.

How could JB Danquah be considered as a 'hero' in Ghanaian political history? On what basis?

It is very unfortunate to note that, inlieu of the President, H.E Akuffo Addo, to concentrate on ruling this country the way he promised, he is rather engaged in what I term 'Ancestral Worshipping'.

Whether Founders' Day or JB Danquah' Day, the true meaning Ghanaians know of one thing: Founder's Day and nothing can change this fact.

Today, the dollar is running around like Usain Bolt without Dr Bawumia arresting it.

The 350 schools have not been done. In fact, not even a single block is buried in the soil.

The 1D1F is nowhere to be found.

The 1V1D has not been done.

There are concrete and hydra-headed problems in the country unsolved, yet the Septuagenarian has found expression in scrapping significant Holidays from our statute books.

These Danquah-Busia apparatchiks will not stop amazing us.