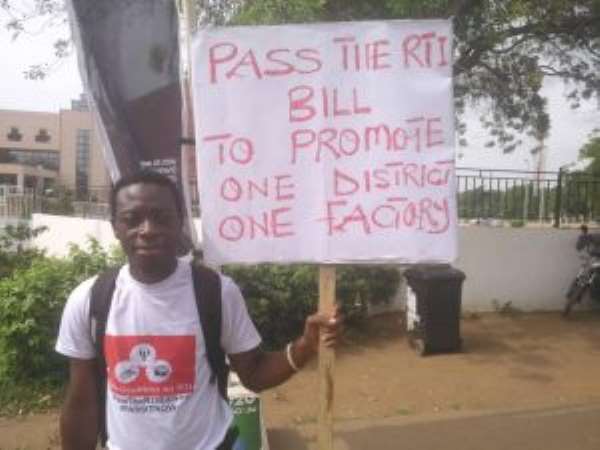 Media Coalition on the Right to Information together with civil society groups including Occupy Ghana, have declared every Friday from henceforth to Christmas day [25th December, 2018] as '#RTIRed Friday'

This is to impress upon Parliament to pass the Right to Information bill which is currently before Parliament.

In a joint press released copied to citinewsroom.com on Monday, the RTI Media Coalition said the period will also see advocates of the RTI bill embark on campaigns on the streets and also visit Parliament on selected days to press home their demands.

“After 10am, leaders of the civil society groups will proceed to Parliament to observe Consideration of the RTI Bill,” it added.

In view of the declaration, the coalition is urging the public to wear “anything RED” on all the Fridays and post a photo of themselves on social media with the hashtag #RTIRedFriday “to demonstrate to our elected Members of Parliament our collective resolve to get them to work in our interest as their employers, and not in their personal or political party interests as has been the case over the years so far as the passage of the RTI Bill is concerned.”

It further indicated that the protest begins a countdown to the promise by the Speaker of Parliament , Prof. Aaron Mike Oquaye that the RTI bill will be passed before the end of the year.

The right to information, which is a fundamental human right guaranteed by the Constitution of Ghana and recognized as a right by International Conventions on Human Rights, has not received the needed attention by elected representatives who have failed to legislate on the matter since 5th February, 2010, when the RTI Bill was first laid in Parliament.

As Ghana's choice of democratic governance requires an active participation by all in the governance process, thereby making the right to information particularly relevant, the RTI coalition believes that citizens must join hands to demand the passage of a credible Bill.