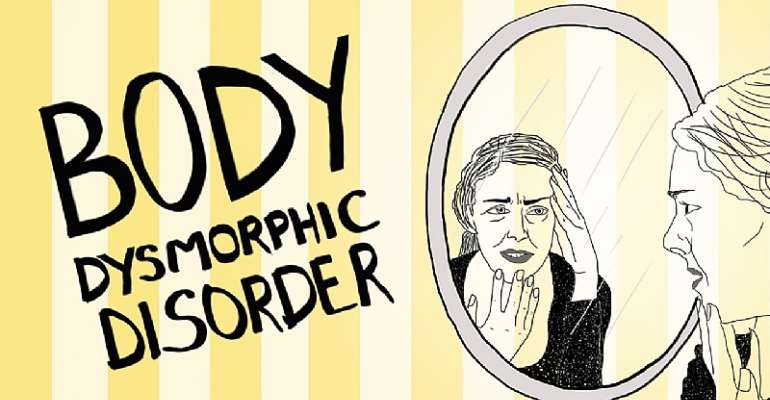 In recent times the issue of fat transfer from one part of the body to the other has become a fashionable art. It is sometimes referred to as body sculpture. The professionals call it plastic surgery to change a body shape that a patient is not comfortable with.

Most of us do not like something about ourselves, such as crooked nose, an uneven smile or eyes that are too large or too small. Others, often, find fault with their hair, skin, nose, chest, buttocks, breast or stomach. In reality, a perceived defect may be only a slight imperfection or non-existent.

Though we may worry more often, about our imperfections, they do not interfere with our daily lives. It is unfortunate, such people, who fret about these slight imperfections or non-existent bodily defects may miss work or school, avoid social situations and isolate themselves, even from family and friends, because they fear others will notice their flaws.

Body Dysmorphic Disorder (BDD) is a body image disorder characterized by persistent and intrusive obsession with an imagined or slight defect in one’s appearance. The thoughts may cause severe emotional distress and interfere with the daily functioning of such individuals. Unfortunately, people who suffer from this disorder think about the real or perceived flaws for hours each day. Such individuals cannot have controlled thoughts and do not accept when relations and loved ones around assure them that, they look good. Body dysmorphic disorder most often develops in adolescents and teenagers. Research shows that it affects men and women almost equally (APA,2013).

BDD results from varied incidences. These include certain biological and environmental factors, such as genetic predisposition, and neurobiological factors such as malfunctioning of serotonin in the brain, personality traits and life experiences. Examples worth citing are child maltreatment, sexual trauma, peer-abuse.

The disorder sufferers may perform some type of compulsive or repetitive behavior to try to hide or improve their flaws, although these behaviors usually give only temporary relief. These people also suffer from anxiety disorders such as social anxiety disorder as well as other disorders including depression, eating disorder or Obsessive-Compulsive Disorder (OCD).

Body Dysmorphic Disorder can also be misdiagnosed as one of the aforementioned disorders, because they share similar symptoms. The difference between BDD and OCD is when the preoccupations or repetitive behavior focus specifically on appearance.

Individuals, who suffer from Body Dysmorphic Disorder see themselves as “ugly” often avoid social exposure or turn to plastic surgery to try to improve or correct their appearance. They concentrate on body parts such as the genitalia, breast size, muscle size and tone, and do engage in suicidal thoughts or behaviors. Some go into extreme grooming and exercise, changing clothes excessively.

People who are faced with this disorder need to book a date or appointment with either a Psychiatrist or a Clinical Psychologist. The fellow should be open and tell or inform the Practitioner what the real problem is about. In other words, what is happening to him or her. The simple reason is that, failure to appropriately communicate what is happening to you correctly will lead to wrong diagnoses. Because, the difference between BDD and OCD is obsessions of body dysmorphic disorder person is focused on appearance.

Early professional care or attention is very important. Recent news on this problem is quiet disturbing, hence, the need for many who are suffering from this disorder to see a professional.

Government drinking from an empty calabash, debt forgiveness...
36 minutes ago