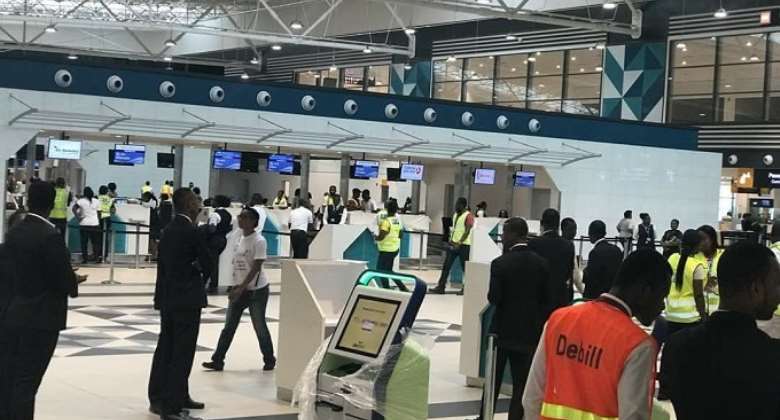 One of President Mahama’s most telling legacies, Terminal 3* at the Kotoka International Airport is finally in service. When the real story of how it came about is eventually told, it would go to add to his unassailable position as a true history-maker. Real history-makers are those not cowed, deflected or deflated by other people’s fears, uncertainties, mischief and oftentimes lack of ambition. All sorts of excuses would be thrown at real history-makers as to why they should not act and follow their natural instincts to arrive at their manifest destinies; instead they are pressured to succumb to the predilections of others. While others would quake and tremble, real history-makers would, with single-minded determination face and stare down history. Real history-makers would absorb all the opportunities and distractions in their environment and go on to engage in the kind of feat that makes history.

He has now settled it: He will!
But since the announcement of intension, what has been the reaction? As expected from the NPP camp, nothing favourable. And then the motely group of NDC aspirant “flagbearers” have been openly antagonistic, with one or two even deigning to descend into the mudslinging gutters. For the NPP and these other NDC aspirants, it is the dog-eat-dog arena of competitive politics and can be understood from that light.

It is those people with the self-righteous tones of “he should not”, who frankly miss the point. Why should he not? They say he has had it all – rising from a parliamentarian to a deputy minister, to a minister, to a vice president and finally to president. Such people claim it is because they love, admire, respect and hold him in high esteem, that they want him not to contest again They do not want him, according to them, to lower himself in the arena of partisan party politicking so as to maintain his local and international reputation. Those telling JM not to run are not basing their naysaying on any objective measurable yardsticks but simply on their own little “demons” and insecurities. What are the yardsticks?

The Law: Would he be breaking the law if he ran?
Age: Is he at that age where it could be argued that he would not make an effective CEO?

Infirmity: Is he so infirm as a result of sickness or ailment and therefore cannot function?

They are not saying that he is breaking the law, unqualified, incapable or even too old (he is much, much younger than the current incumbent) but simply that their emotions tell them so and so they pitch their disapproval at that visceral level: “We think of you better than you think of yourself.” That is not enough since the decision is not theirs but his!

Beyond this, there is genuine public outcry for his return! Not only from NDC members but others who feel desperately betrayed by the 2016 empty promises of the NPP and the false allegations against President Mahama just to gain power. Since then it’s become clear that for some people, to be called President is their end game, for President Mahama, it is an opportunity to serve Ghana and leave a legacy. In that respect, he has discharged himself with distinction.

President Mahama should run and subject himself to his party’s selection process (that in itself would be ground-breaking) and from there on, confront his manifest destiny. His achievements would speak for him. At the time of writing, Terminal 3 at the Kotoka International Airport, a John Mahama legacy was being inaugurated into service. One of numerous similar projects strewn all over the country. The courage, self-sacrifice, tenacity and firmness with which he administered Ghana are not diminished just because he had one electoral setback. Ghana has a lot to thank him for – certainly good enough reason for him to return to do his second term.

Former President Kufour got his party’s nomination three times and lost the first two stabs at the presidency, eventually getting there after a run-off; Mills went through an identical scenario but fate intervened with death and he passed on to eternity before completing his first term; JM finished the last few months of Mill’s first term and run for the presidency on his own steam and won. His attempt at a second term met with a setback with Nana Akufo-Addo being voted to office, who like Kufuor and Mills also got his party’s nomination three times, losing two national elections and winning the third attempt. JM’s fortunes have followed different trajectories from his two predecessors and successor and now fate again is cheering him on to the next stage of his manifest destiny. It was their manifest destinies that urged on Kufuor, Mills and Nana Addo to push on even as it was beginning to look like they were unelectable!

John Mahama has a point to make and a precedence to set. He should not be sabotaged, especially by his own party. Those aspirants in the NDC wishing to contest JM must take note. Their utterances and gripes are echoes of NPP attacks on their party. To stand on those grounds to challenge JM would be to legitimise NPP’s attacks on the NDC itself including presidential aspirants. If you take their statements and remove their names you can safely put in NPP names and it would chime! They are endorsing the NPP attacks in their bid to get their party’s nomination; that’s shooting themselves in the foot, for whose record are they going to run on, should one of them get nominated to run as the NDC presidential candidate other than JM’s. Unless of course, yes, unless they are telling Ghanaians that their party’s tenure was so abysmal that they deserved to lose. The records however, tell a different story: Roads, schools, hospitals, airports, private sector growth, progressive foreign policy, upholding of media and other human rights freedoms – just look around and you can’t miss the glowing evidence of the JM years. Is that what they want to throw away? Their internal party disagreements are not unique – all parties have internal squabbles but to ride on that to deny JM a shot at the 2020 elections would be downright suicidal. Charisma plays a huge part in politics, JM’s is far in excess of Nana Akufo-Addo’s and any of those in the NDC lining up to throw the baby away with the bath water! Overwhelmingly, call-ins to radio stations – a good public opinion barometer – demand JM’s return, a demand that drowns out all else, and crucially, none of his competitors even gets a mention! History, is paying close attention… “Though in moral terms no one person is indispensable, in the course of history and in strategic terms, there is always that one person who is indispensable.”

*NB: One person whose name deserves more mention than others in the Terminal 3 story is Charles Asare’s, the former Managing Director of Ghana Airports Company during the Mahama Administration. It is he who midwifed the project to birth. For the avoidance of doubt, neither the current Ministry of Aviation nor current MD of the Airports Company had anything to do with it – save for the commissioning!