Mahama Is The Most Experienced Politician In The History Of Ghana 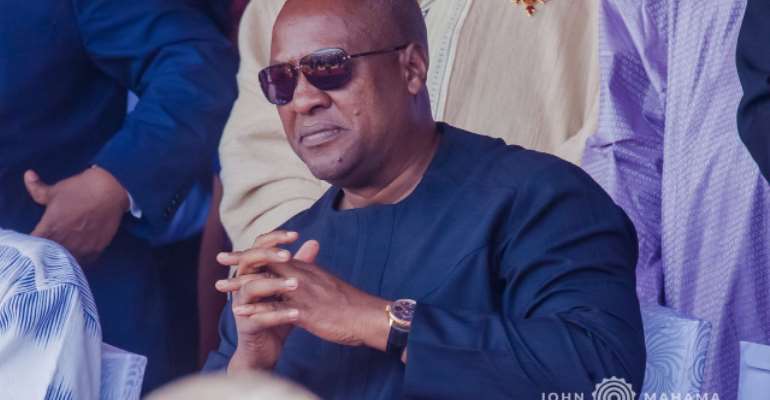 For sometime now the question, “who is the most experienced politician in the history of Ghana?” keeps invading my thoughts. As I was pondering over this, I stumbled over some information which makes President John Dramani Mahama unarguably the title holder. Check this:

He was an MP for three terms, Deputy Communications Minister from 1997 to 1998. He became the substantive Minister for Communications from 1998 to 2001. H.E. John Dramani Mahama served as the chairman of the National Communication Authority, and played a key role in stabilising the Ghana telecom sector after deregulation in 1997.

He also served as a member of the Pan African Parliament where he was chairman of the West Africa Caucus. He was the Minority Parliamentary Spokesman for communications from 2001 to 2004, and NDC National Director of Communications in 2002.

In 2005, Mr. Mahama was the Minority Parliamentary Spokesman for Foreign Affairs, and became Vice President of the Republic of Ghana on 7th January, 2009. He became a caretaker president in 2012 when President Atta Mills died. The young man from Bole was sworn in as President on 7th January, 2013 after winning a one-touch presidential election in 2012.

On the international front, he was elected chair of ECOWAS for two terms, and was also elected chairman of AU Trade Committee. There are more: he was co-chairperson of the group of sixteen SDGs advocates set up by the UN.

Such wealth of experience is very much needed to make Ghana the pride of Africa, and that is why I am happy the former president has joined the race to lead the NDC in 2020.

I agree that the NDC has fine prospective flagbearers, most of whom are my good friends, but we need to study the times and seasons to be able to make informed choices. 1 Chronicles 12:32 tells us that the men of Issachar had understanding of the signs of the times to know what Israel ought to do; and this should be the guiding principle of the NDC in their choice of a flagbearer.

2020 would be a critical moment for the National Democratic Congress. The party has two choices: endorse Mahama for 2020 or risk staying in opposition for another four years or even more; the situation the NDC finds itself could be likened to a final penalty kick which requires that a team puts its best player forward.

Former President Mahama’s next bid is going to be a doozy of brilliant collaboration of experience and learned lessons. This time around all “is” will be dotted and “ts” will be crossed. You may loathe the former president, but you can't take away that aura around him; he is fascinatingly charming, impressively magical and powerfully iridescent. Everything around him scream confidence. My heart swells with pride for being his friend. His decision to contest will prove cathartic, and I have no doubt that a second chance for him will be fructified.

I know some people don't want him to lead again; and they might rightly, perhaps also wrongly claim that he was the reason for NDC’s loss in 2016, but I want to remind such people that the same person impressively won the 2012 by campaigning for only three months. I won't, therefore, relish to continue to explain that his loss might be an act of God to save our beautiful country from chaos and instability.

It would be obviously absurd for anyone to think or argue that H.E. John Dramani Mahama is not a good leader; that will constitute sophism deliberately intended to deceive the people of Ghana because the evidence tells a different story. Such thinking would be either by design or wickedness or demonic. It will be too much witchery.

I entreat NDC loyalists and grassroot members not to buy into this fallacy because it will never help the NDC to recapture power. One of the strategies of war is to attack your enemy where he is unprepared, and now that Akufo-Addo and his NPP seem to be dazed, let's quickly come together and hit them hard till they go into coma. If your enemy leaves a door open, you must rush in. Kikikikiiki, we have work to do, and it must be urgent because many doors have been left ajar by Opana and his government.