Our Eyes Are Opened; Do The Talking And Let The Government Do The Working 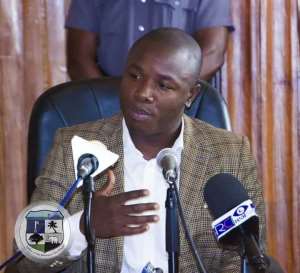 In the wake of national political consciousness the nation also seeks economic growth and development. As the pattern or chain of development in rural and urban Liberia changes in respect to regime change, our country is now becoming newer and cleaner. The City of Monrovia is regaining its prestige though the center of greed and envy have become the order of a certain political class within our society. There are other underdeveloped nations around the globe and Liberia is no exception. However, we have the kind of leaders who concentrate on development day by day. The president is a very good example. After a smooth democratic transition which took place on January 22, 2018, with George Weah ascension to the nation's highest seat, within the period of five months, he began to carry on series of major developmental activities.

He laid the foundation of the 14 Military Hospital, built roads connecting Doe Community and Clara Town, build homes for thousands of homeless citizens in the West Point Community, replaced dubbing houses with concrete homes for the underprivileged in the rural and urban settlements, built a modern Redemption Hospital in New Kru Town area, reduce tariff on local commodities, infused millions USD25.00 in the Liberian economy, reduced his salary by 25.00 percent, reduced the salary of officials of government, signed the Eton millions USD536.00 loan agreement including the World Bank deal, broke ground for the construction of roads from Liberia Coca-Cola Bottling Company to ELWA Junction, trothed to connect the coastal highway and a crossover bridge from Sinkor to Kesselee Boulevard around the Bardnersville area, paid 34,000 students WASSCE fees, initiated the Installation of an online digital registration system at the University of Liberia, as well as the provision of free WiFi for students on the Capitol Hill Campus of the University of Liberia, and placed about 480 PSL teachers on Government payroll.

Amongst others, he led off on a US $7 million housing project to develop rural and slum communities, installed 736 out of 2,000 street lights all over Monrovia, initiated discussions to maximize electricity through an alternative means, enforced Mittal Steel to live up to their commitment to pave the Ganta-Yekepa road, and he began his negotiations to expand Robertsfield Highway into a 4 lane highway. To also reduce the stress or tension on those in the public, the president allocated funds to repair 32 NTA buses that seemed useless to the past regime to aid with public transportation.

Other government officials like the Lord Mayor of the Monrovia City Corporation, Hon. Jefferson T. Koijee have been positively contributing to the Pro-poor Agenda as per their respective entities over which they preside. As some continue to criticize Mayor Koijee, photographing garbages outside of the City of Monrovia claiming that it's part of his responsibilities, he continues to concentrate on his developmental platform in making the city clean and green. He established the Weah for Clean City Campaign to enable the citizens control waste materials and contribute to the cleanness of the City of Monrovia. Few months ago he visited Japan to seek logistical support for a smooth operation of waste disposal, established cleanup programs in high schools around the country, signed a memorandum of understanding to regulate street selling in the City of Monrovia and through his leadership the entity received three double cabin hilux pickups from World Bank.

Mayor Jefferson T. Koijee who is the winner of the Face of Trek Africa 2018 Youth Personality Award also promoted the City Police by giving them better training and neatly unifying them to help regulate garbage disposal and waste management. In a short period of time they arrested ten individuals who illegally disposed garbages in the streets.

This is a clear indication that the Pro-poor Agenda will succeed. While the citizens are applauding the mayor for his great effort in transforming the City of Monrovia in a short period of time, the enemies of the state are destructively criticizing out of order. But this means no harm to the growth and development of our country and the CDC-led government. Thanks to the City Governance headed by Mayor Jefferson T. Koijee! Liberia and Liberians are proud of you.

Let’s avoid violence, anything that will tarnish image of NP...
24 minutes ago