Monrovia City Mayor At African Capital Cities Forum: Mayor Jefferson T. Koijee Is At The Verge Of Illuminating The City Of Monrovia Through His International Lobbying Power 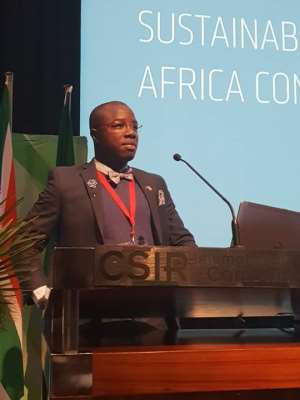 As Jefferson T. Koijee, Mayor of the Monrovia City Corporation - MCC takes on the mantle of authority and uses his tuatara to seek international support from South Africa, Japan, Morocco and other partnering nations around the globe, it becomes a mandate that the people of the homeland can rest assure that their expectations will be met in abundance.

His participation in the African Capital Cities Forum hosted in South Africa this year which began on June 5, 2018 and ends June 7, 2018 is intended to handle series of major challenges faced by cities in Africa comprising of transportation, waste management, finance, water and sanitation, climate change and energy, has boosted the developmental agenda of the City of Monrovia. This step taken by the mayor in fostering the pro-poor mantra will definitely place the City of Monrovia on the list of top ranking cities in Africa and the world at large.

The African Capital Cities Sustainability Forum is a renowned and puissant forum with flourishing community of mayors from various capital cities across the African continent hosted in Tshwane, South Africa bringing together thirty-five capital cities of the fifty-four nations in Africa. In making the City of Monrovia very safe and clean, sustainable and efficient, Mayor Jefferson T. Koijee championed the cause of the City of Monrovia to the Mayor of Tshwane and the government of South Africa to extend their cordiality in creating a student exchange program between the University of Liberia and University of Cape Town, Johannesburg and provide buses to help take students to and fro the campuses of the University of Liberia.

With this great support, the crisis in both the education and transportation sectors will be settled. He added that the authority of the City of Monrovia is faced with major challenges that need to be addressed. Among these include solid waste management, manpower to enforce the city's stature, housing, low security, equipment to collect waste, human resource capacity, finance, etc.

Following the mayor's elucidation, he also pleaded to the Mayor of Tshwane and the government of South Africa to donate to the City of Monrovia ambulances and fire trucks as the city is exposed to diseases and other health related catastrophes. This would help in dealing with challenging situations such as fire disaster and means of compensating the sick to hospitals or clinics.

The Government of Liberia as it continue to forge ahead in changing minds and changing lives of its citizens, with no exclusion of the Monrovia City Corporation headed by Mayor Jefferson T. Koijee has also set the country on its path to delivering better development outcome irrespective of health, sanitation, education, transportation, agriculture, roads and infrastructures and etc.

The Lord Mayor of the Monrovia City laid down a new foundation and set the country's capital on a smooth developmental path, and released cash burden from the Government of Liberia through his advocacy. After joining other visionary mayors from around Africa to share his dream, Mayor Jefferson T. Koijee served as one of the panellists and made mention that his major aim and objective is to make sure that the City of Monrovia becomes one of the most beautiful cities in Africa by keeping it safe and clean, engage the aspect of public transportation, provide job opportunities for youths and so on. His commitment in achieving this dream remains paramount in accordance with the pro-poor agenda, he said.

Against this backdrop, the Lord Mayor of the Monrovia City Corporation remains dedicated to his actions as he continues to set the Government of Liberia and the pro-poor agenda at the highest level. Making the agenda the best ever in the history of the republic, the mayor trothed that the city government will keep friendly with other city governments in Africa.