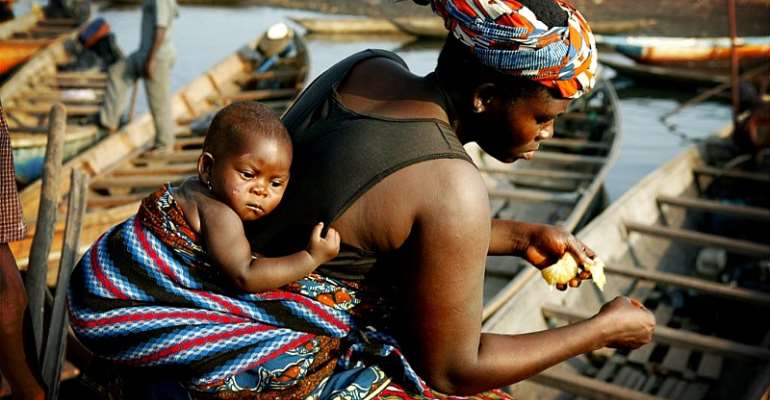 It remains a huge challenge that impedes enhancement in the socio-economic livelihood of many women in Ghana, and such cases are mostly common in rural areas.

Though, women unpaid care work has been given increased attention, and partially reached the research agenda's of mainstream economics and sociology, little commitments are being made by successive governments to address the practice.

Many non-governmental and civil society organizations are leading advocacy against the practice, which has gradually become a societal norm.

Women unpaid care work can simply be understood as all productive activities outside the official labour market done by women for their own households or for others.

These activities are useful in the sense that affected women use scarce resources to satisfy human wants such as housework, care for children, and for sick as well as old people.

On the average, it takes at least as much of time of women who render unpaid care work as does paid work, as a substantial share of human needs is satisfied by their fruits.

The time by women in unpaid care work can negatively affect a woman’s ability to participate fully in productive employment.

Scenario
Yaa Asantewaa was 17 years old when she gave birth. She became pregnant after two years of relationship she “did not take seriously”.

Asantewaa confides “I never desire to go into marriage, but our custom compels my parents to force me into marriage”.

According to her, life was “sweet” when she first moved into her matrimonial home at Doboso, a predominantly farming community.

Asantewaa, a-35-year-old unemployed nursing mother who four additional children said events turned upside down when her husband lost his job as a Bank Manager and moved the family from the city to the Doboso community.

Life was extremely bad in the village, a situation, she said forced her husband to go into subsistent or peasant farming for the upkeep of the family.

Asantewaa said since her family moved into the village, she has to wake up in early hours sweep, wash, cook, bath and dress the four children to go to school.

“I have to wake up around 4am, walk kilometres to fetch water from a nearby stream for the when my husband look unconcern”, she said flimsy in a voice.

The irony f the matter, Asantewaa added was that her husband did not appreciate whatever she does in the house, but always cast insinuation on her. She said I am a misfortune in his life.

Asantewaa indicated that she had to follow her husband to the farm every morning, but she not enjoyed the farm proceeds as her husband failed to give her some money for her upkeep.

Indeed women in rural areas go through terrible and unacceptable situation in the area of unpaid care work.

Some outmoded traditional practices are driving force which fuel and make women susceptible to unpaid care work in society.

Such practices put huge responsibility on women in the household.

wmen en walk distances to fetch water, wash, prepare meals, and do all household chores in the family, whilst their husbands sometimes sit unconcern without care.

Most of these “unrecognized” works had had huge rippling effects on women impeding their progress and development.

Women unpaid care work, on one way or the other, is a form of domestic violence as it tramples on the fundamental human rights and freedoms of women.

Unpaid care work leads many women into emotional trauma, depression, and other related mental disorders as well as affects their socio-economic prospects.

It also affects the thinking process of women, impede their natural growth and jeopardize or ruin their future.

In urban areas, in particularly, many women also balanced paid work with unpaid care work in the family. This situation does not only slow down their performance and productivity, but also rendered those women vulnerable in work places.

Sometimes, due promotions of women who balanced paid with unpaid care work are unnecessarily delayed.

In fact, the contribution of women in the upbringing and development of the family could not be overestimated hence the need to implement national policies that could streamline certain fundamental issues that spur women unpaid care work in the society.

More so, women devote significantly time to household work than men and this work is essential for the quality of life of men, women and their children, but the way it is shared between women and men is a major source of gender inequality.

There is therefore, there also the need to put in place realistic policy guideline that would address gender inequality in the labout market in a broader perspective.

Added to it, certain societal norms and traditional values encourage women unpaid care. Most of these traditional values are outmoded, hence the need for a national policy to abolish those customs in the supreme interest of women.

I also believe that if women are supported to participate actively in decision making both at local and national levels, certain issues which are inimical to their growth could be identified and addressed. For this reasons, the need for a policy that would create a specific percentage of seat for women in the District Assembly elections is necessary. This would spur many women to contest in the elections.

In governance also, elected presidents and their political parties need a policy framework as a guide to appoint women to occupy some key positions in government.

Last but not the least, gender parity in the education sector needed to be addressed. It is very important to bridge the wide gap between boy and girl child education. To address women unpaid care work, boys and girls must have access to equal education from the basic to the tertiary levels.

This required a long term national development plan that would put priority on girl-child education to motivate girls to climb high on the educational ladder.

In conclusion, women unpaid care work is not only inimical to the growth of women, but also affects in their bid towards proper upbringing and development of children, and the entire family as well.

It is my utmost hope and believe that with good policies, unpaid care work could be a shared or collective responsibility among couples and their children so that the blessings of love, care and relationships in marriage, as a divine institution would be experienced in every home.