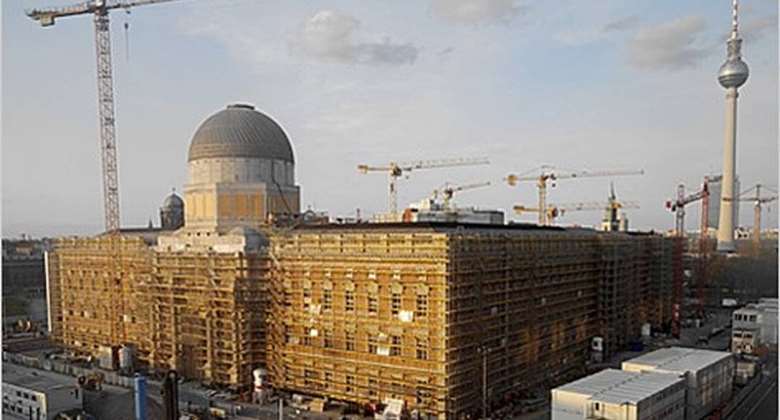 The resurrected Berlin City Palace that contains the Humboldt-Forum.

'The rhetoric of the leaders of the pan-European world… and the mainstream media and Establishment intellectuals is filled with appeals to universalism as the basic justification of their policies. This is especially so when they talk about their policies relating to the 'others'- the countries of the non-European world, populations of the poorer and 'less developed' nations. The ton is often righteous, hectoring, and arrogant but the policies are always presented as reflecting universal values and truths'. Immanuel Wallerstein, European Universalism (2006).

As the 600million euros project, Humboldt-Forum, nears its finalization, mounting pressure arises from various quarters in Germany, for the settlement of basic issues concerning the hundreds of ethnographical objects acquired during the colonial period and kept in the Ethnological Museum, Dahlem, Berlin, that are to be transferred to the new gigantic institution.

Readers are no doubt aware of the ridiculous proposals of Western museums to establish a permanent display of looted Benin artefacts in Benin City, whilst still retaining their ownership of the objects looted in 1897. It is not known whether the Humboldt Forum is officially represented in the so-called Benin Dialogue Group but the Ethnology Museum, Berlin, is a participant, holding some 508 Benin artefacts that it cannot display for lack of space.

The well-known popular German periodical, Der Spiegel, has in its issue of this week (Nr.42/14.10.2017), referred to the ongoing discussions in Germany on this massive project that revives the greatness of Prussian might and seems to be reaching its realization. After referring to the various issues, such as the presence of looted objects in the Ethnology museum, the Prussian slavery past and the colonial period, the weekly periodical declares that for a long time, only supporters of the Humboldt-Project had the full attention of the media, now its opponents are becoming more vociferous and the debates have reached hurricane proportions that could damage the reputation of the project even before it has been completed. Spiegel writes: 'Suddenly, in 2017, the pressure has grown bigger, suddenly one must deal with history. And suddenly, it appears that until the opening of the Forum one has only two years to save the reputation of the palace.' Leading in this debate are two activist groups, Berlin Postkolonial and the No Humboldt 21

Most of the problems concerning the Humboldt-Forum are, of course, as recognized by the periodical, not new. They derive from German history and the unwillingness or inability of Germans to face their colonial past. The opposition to the Humboldt-Forum has been led vigorously by young Germans activists who see much of this as revival of Prussian glory, despite the terrible German colonial past and its unsettled problems. They are concerned by the moral quality of the project and German society that produces such a project.

Another source of pressure on the Humboldt-Forum and the Prussian Heritage Foundation came from a conference held this week on the Prussian Colonial Heritage which dealt with the question of artefacts and human remains. The conference requested the German authorities, inter alia, to inform and invite 'members of the source communities to discuss publicly the future of sacred and other cultural objects in Berlin collections that were appropriated by force and fraud in the wake of colonialism'.

Will the Humboldt-Forum invite any members of the source communities who are critical of European pretentions to universalism and hence their right to keep artefacts of others looted with violence or the human remains of those whose deaths can be traced to German policies?

The shameful business of the rich robbing the poor of their artefacts and even their human remains must end. The only viable solution to the artefacts question is to accept to return most of the looted objects to their countries of origin as the United Nations and UNESCO have demanded in numerous resolutions. One may then negotiate with the owners what artefacts could still be kept in Western museums. We should remember that we are not dealing with questions of the past or attempts to re-write history, as some opponents of restitution are wont to say. We are concerned with the present imbalance as regards possession of Benin artefacts. A situation where the Ethnology Museum, Berlin, holds 508 of the best Benin artefacts, more than the Oba of Benin, from whose Palace they were stolen in 1897, cannot be accepted as normal. Do the Benin artefacts reflect German history or Benin history? What are the statues of Queen-Mother Idia, Oba Ewuakpe, Oba Akenzua I and other icons of Benin history doing in Berlin?

All human remains must be returned to their countries of origin for proper burial. Excuses such as the need to find out where the skeletons and skulls came from are not convincing. The notorious and insatiable collector Felix von Luschan and the terrible Dr. Eugen Fischer always kept exact records of what they were doing. What happened to the documentation of the private collection of Felix von Luschan that is said to be in the American Museum of Natural History, New York?

The relevant resolution of the conference on the Prussian Colonial Heritage is reproduced below.

Surviving Herero returning Starved from the Omaheke Desert where they had been driven by German troops after the Battle at Waterberg; Two women in front were unable to stand.

We, the undersigned speakers, presenters and participants of the transnational conference “Prussian Colonial Heritage: Sacred Objects and Human Remains in Berlin Museums” on October 14/15, 2017 in the Centre Français de Berlin recognize that communities all over the world have lost a considerable part of their cultural heritage, including even “sensitive materials” - comprising “sacred objects” and “human remains” - by force and fraud in the wake of colonial conquests.

In considering this, we recognize and welcome the fact that the Foundation Prussian Cultural Heritage (SPK) has recently reacted to the mounting criticism by source communities, civil society and investigative journalism and:

- intensified provenance research for objects chosen to be displayed in the Humboldt Forum, allowed for dialogue with source communities and national governments of formerly colonized countries like Nigeria and Tanzania, and repeatedly promised to repatriate objects if they should turn out to have been taken by unlawful means.

- recently started a project of systematic and joint provenance research on human remains from the former colony “German East-Africa” (Rwanda, Burundi and Tanzania) and repeatedly promised to repatriate human remains appropriated in the wake of colonialism for racist researches in Berlin.

We hold, however, that these efforts are in no way sufficient to answer the obligations concerning “sensitive materials” as laid down by the ICOM Code of Ethics and by the UN Declaration on the Rights of Indigenous Peoples.

In expectation of the upcoming centenary of the breakdown of the German colonial empire in 1918/19 and the opening of the Humboldt Forum in the Berlin Palace in 2019 we urge the German government and the SPK to take advantage of this conjuncture by significantly intensifying their efforts to deal responsibly with Berlin's colonial heritage.

In particular, we ask them to live up until 2019 to the self-declared aim of the Humboldt Forum to become a place of transnational dialogue and global reconciliation by:

1. commencing with joint provenance research projects aimed at repatriation of all human remains from colonized people stored in the basements of the SPK (the collection of the Berliner Anatomisches Institut, Felix von Luschan's so called S(kull) Collection of the Königliches Museum für Völkerkunde – today the Ethnological Museum - as well as the Rudolf Virchow Collection in possession of the Berliner Gesellschaft für Anthropologie, Ethnologic und Urgeschichte - BGAEU) in close cooperation with the countries and communities of the descendants who must be informed immediately about the whereabouts of their ancestors' remains. In case there are some human remains that may be traced to a community that was effectively exterminated or that cannot be traced to a particular source community such remains still need to be returned, and shall go to a consensus group of related source communities so they can be treated respectfully.

2. establishing an easily accessible, central research and information canter dealing with queries about sensitive materials from colonial times. The centre should collect and share information about all collections in and from Germany containing sacred objects and human remains.

3. providing an easily accessible, thorough and truthful description (in German, English, French, Spanish) of the provenance of all sacred and other cultural objects to be displayed in the Humboldt Forum in the reconstructed Berlin Palace itself as well as in the online database SMB-digital: http://www.smb-digital.de/eMuseumPlus.

4. informing and inviting members of the source communities to discuss publicly the future of sacred and other cultural objects in Berlin collections that were appropriated by force and fraud in the wake of colonialism.

5. initiate the repatriation process of sacred and other cultural objects that have been appropriated by force and fraud in colonized countries in cases where source communities or nation-states express their intention to take back what is important for their cultures and was created by their ancestors.

About the Conference
The debate concerning the provenance and future of items acquired in the wake of European colonialism has intensified in recent times, due to the current German project which aims to reconstruct the imperial Berlin Palace and once again display the world's cultural treasures in the building. Above all this debate concerns translocated “materials of sacred significance” and human remains, items which belong to a category defined by the International Council of Museums (ICOM) and the UN as “sensitive materials”.

Both of these organizations require the museums to expeditiously “initiate dialogues” with the source communities in order to discuss “the return of cultural property”. However, within the current debate concerning Berlin's non-European collections the opinions of those who “have lost a significant part of their heritage” are hardly represented at all. Our conference will provide a platform for source community members and experts who should have been consulted “with respect and sensitivity” (ICOM) by the managers of the Humboldt Forum and of the Foundation Prussian Cultural Heritage (SPK) all along.