The Battle Still Is The Lord's; Who Takes Over The Baton Of National Nasara Coordinator Of The Ruling NPP? 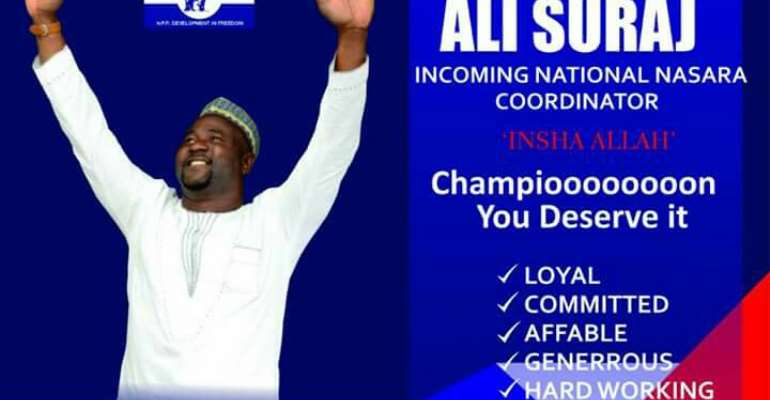 The New Patriotic Party has evolved from a long-standing tradition which is well noted even among political pundits for Marshaling grandeur and gems to spearhead various underpinning party hierarchies which eventually in recent past,has percolated into resounding victories.

This indomitable track record in time past is palpable in well deserved victories the NPP recorded in 2000, 2004 and the recent 2016 elections under the fourth Republican constitution.All these successes chalked can also largely be attributed to the tireless and relentless work of elected party executives.

As we clamour for the ever competitive in-house elections in the NPP, it is prudent for a transparent afro barometer of the leadership qualities of all contesting candidates to be measured so as to crusade a well deserved victory come 2020 elections.Especially, in the process of mobilizing the Zongo frontier in a blazing spirit to ejaculation victory once again.

Needful to know, upon a cursory perusal and a careful read_ in _between the lines of all the candidates on the raider to becoming National Nasara of the New patriotic party, one instrumental figure with an insurmountable leadership credentials backed by the party's grassroot and a sure candidate to take over the baton from Hon. Kamaldeen as the National Nasara coordinator beacons.

Most certainly,his name is not esoteric in the glittering face of hardcore contemporary Ghanaian politics. Hon.Ali SURAJ,affectionately called NPP Ali in the political palace of Ghana is the Zongo icon.A man truly defined and refined, tried and tested. Well, it will interest you to know that, Hon. SURAJ Ali has risen through the ranks.He has pioneered countless Nasara activities and programs throughout the length and breath of this country and equally, beyond the borders of Ghana.He was instrumental in instituting the Nasara wing of New York, USA chapter.And indeed,has a dynamic approach to dealing with issues pertaining to the organizing the base of the party especially, the zongo folks.

HON. ALI SURAJ, without any segregation of doubt is a solid and formidable figure ready to anchor the supreme desires of the Zongo communities of the largest political family in Ghana.

Let's give him the mandate to bring his enormous leadership credentials to bear in this sensitive portfolio of National Nasara coordinator.He is poised to swiftly resonate in the Zongo communities,the victory agenda come 2020 electioneering campaign.

The clarion call and indeed,the onus is on all and sundry in the great elephant fragnity to roll on their unblemished support for the charismatic and radical grassroot leader,Ali SURAJ

Let me once again reiterate the urgent need for all party functionaries and all well meaning diehard members,grassroot supporters, sympathizers, and all delegates from the lowest division to regional delegates to galvanized their support in the upcoming in-house elections for the amiable personality, Ali SURAJ.

God bless the the Zongo communities of our beloved country.

God bless the New Patriotic Party.
God bless Ghana!
Nothing ever is, Everything is Becoming...... Ali SURAJ all the way...

The right man for the Job!

What Will The Publication Of 260-Page Cocoa Road Audit Repor...
15 minutes ago