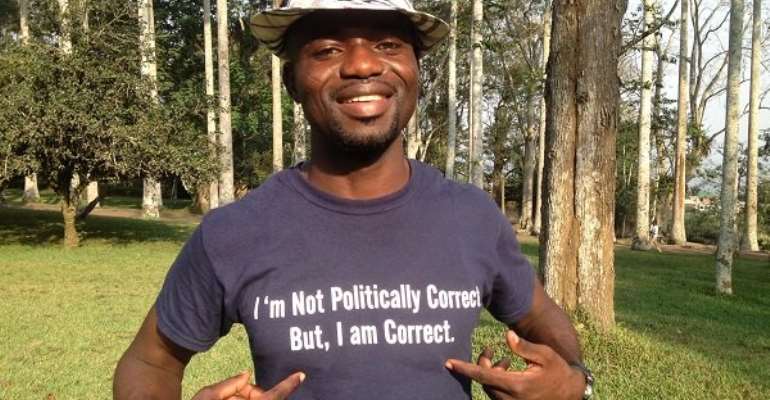 Long time no hear from you.

I hope you've not been consumed by the fall army worms? Hmmm! The stink-rat has married the widow of the large malodorous ant and the evil shell is thereby increased. When you burn your hair you will definitely smell the scent. Your continuous silence on issues of national interest is increasingly worrying. This is usual of you; what's happening?

What era are we living now? An era of see no Evil, hear no Evil and speak no Evil?

Manasseh be that oo!, Nana Kwame's good friend, Mr. Bongo boy, the journalist who thought honeymoon is all about climbing coconut trees; why you be monkey? Anyway you show some resemblance with the money lineage. Your political colour is rather exposing you too early and as for your HYPOCRISY and double standards; the least said about them the better. You had enough time to travel all the way to Burkina Faso to investigate a so-called ford gift from Mr. Kanazoe but can't find same time to investigate the numerous scandals going on in Ghana today? Awurade Yakubu, See no Evil, Hear no Evil and speak no Evil; I understand.

I can't believe you even had time to investigate Chairman Bugri Goat who is so corrupt such that he can't even resist a guinea fowl bribe after he lied that he has been bribed with a Ford by the NDC but can't do same now? Wonders shall never end. By the way does Chairman Bugri Naabu's ugly face and needless uneducated shenanigans look like someone who deserves a Ford as bribe?

Many evil things are happening; can't you see??? Boakye Agyarko of GHS 150,000 parliamentary bribery scandal fame bribed our parliamentary appointment committee; an issue Hon. Mahama Ayariga raised an alarm of which all the evil people in Ghana turned against him and he needed someone like you to set the records straight; where we're you? You don't want to See Evil, Hear no Evil and speak no Evil, abi? I see!

Alfred Obeng Boateng of the BUSTED BOST BOSS fame is still Bosting. He sold contaminated fuel to his own unregistered company which was unlicensed;, that has a greater potential of endangering our environment, and you couldn't do something? See no Evil, Hear no Evil and Speak no Evil abi? Interesting!!!

Chairman Bugri Goat reduced appointments of MMDCES in the Northern Region to the highest bidder of goats and sheep standards, an issue Otiko Djaba, the Minister of Gender, the woman who is a known insult production machine alleged and you couldn't do anything? See no Evil, Hear no Evil and speak no Evil, abi? SUBAHAMMDILAI!

What about the CANCEROUS BOND OF KYEBI FOR KYEDI 2017? You no hear am? Ken Ofori-Atta, the Minister of Finance issued a $2.25Billion bond within 4 hours. A bond whose issue was shrouded in secrecy, issued without recourse to laid down procedures and industry best practices requirements. A bond whose issue the Attorney General, governments principal lawyer wasn't aware of. A bond whose issue saw Ghana depositing the destiny of our future generations into 1 American businessman, Mr. Travegor G. As for the conflict of interest element, I leave it for posterity. That too you never hear? See no Evil, Hear no Evil and speak no Evil, abi? Ayoooooooooooo!

The President traveled to this year’s UN General Assembly with a delegation of 197 family and friends; plus an additional 24 chiefs from Akyem land with state funds; that too you decided to remain mute? See no Evil, Hear no Evil and Speak no Evil, abi?

The President used our taxpayers money to celebrate the birthday of an Akyem Chief in no other place but an expensive place in New York? That too you find nothing wrong with that? The President commissioned a water project in Wa. A project which was initiated, started and finished by the NDC but Akufo-Addo desperately credited it to NPP Kuffour's regime, you couldn't say anything until the office of former President Kuffour came out to denounce Akufo-Addo’s claim?

Samuel Abu Jinapor, I don't know whether to call him a Dep. Chief of Staff or Dep. Thief of Staff is building a multitude million mansion in Damongo; 9 months after joining government, you can't also do anything about it? JESUS CHRIST OF NAZARETH, judgment day will be so interesting. You're fast losing your credibility though I have never trusted your objectivity right from day one, however others did. Do something before it is too late.

I know this adage "If you're overzealous to retaliate someone who farts on you, you'll end up bringing out the real thing" however, you're my country man so I can't go mute, hence the reason I am admonishing you to be consistent. You see Anas, he is consistent and credible. You are picky because the likes of uneducated Naabu influence you. Besides a man only dies when the source of his affliction is unknown to him, now that I have pointed it out to you, I hope and pray you don't die out.

Mr. Bongo boy, do not be like the Horse or the Mule which have no understanding but must be controlled by the bit and bridle before they come to you. Then again, you were very wicked to your brother, President John Dramani Mahama but I will like to refer you to a scripture in the Bible; Psalm 32:10. Many are the woes of the wicked. ..........

What motivates you to work? I want to help you out! Is it Liquor, Beer or "Soli" You have suddenly abandoned your role as a watchdog and you are now playing the role of a GUARD DOG, so it seems to me like the Napoleon who advised all animals to avoid sleeping on beds has found itself a comfortable downing suit and drinking whisky, a classic case of convenience politics or better put some animals are more equal than others?

Hmmmm change has come indeed and I'm really gritting my teeth and shaking my damn head in utmost disbelief, then again, the only help I can offer a widow screaming from the concubines room is to peep through the window, that I have done.

It’s me, your brother from Upper East.