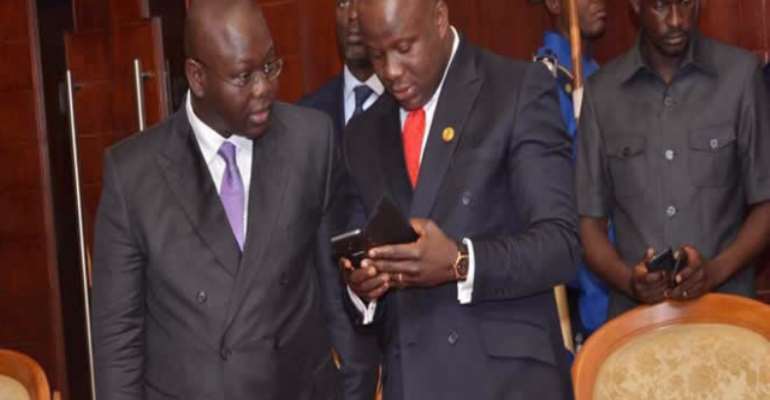 Mr. President greetings from Binduri.
It is often said that when the inexplicable happens, the unquestionable is imagined! The inexplicable has happened and you are by this petition requested to dismiss Samuel Abu Jinapor and Francis Asenso-Boakye both your Deputy Chiefs of Staff with immediate effect. The stink-rat has married the widow of the large malodorous ant and the evil shell is thereby increased. It is therefore inevitable that whoever burns his hair will definitely smell the scent.

Mr. President you admonished us to be citizens and not spectators in your maiden plagiarized inaugural independence day speech. Kwame A-Plus alleged a few weeks ago that your two deputy Chiefs or now ‘thieves’ of Staff namely Samuel Abu Jinapor and Francis Asenso-Boakye are "Corrupt; Arrogant and Thieves " of which you directed the Criminal Investigations Department (CID) of the now heavily politicised Ghana Police Service to invite him to substantiate his claims; which he did. But little did we know that your government is a specialist in cover-ups. It also taught us you are just a player to the gallery when you disturb our ears about your determination to fight corruption.

There is a leaked audio tape circulating which I also have a copy. The audio reveals everything well-meaning Ghanaians need to know as far as the scandal is concerned. There was a huge cover-up. But now that the cat had been let out of the bag all Ghanaians demand from you is the immediate dismissal of the two gentlemen.

THIS IS WHERE IT ALL STARTED AND ENDED. THE OFFICERS INVOLVED IN THIS CASE MUST RESIGN OR BE SACKED. THEY HAVE DISGRACED THEMSELVES AND ARE NOT DIGNIFIED ENOUGH TO CONTINUE TO REMAIN AS POLICE OFFICERS OF THE STATE.

The conversation on the tape is transcribed below in case you have not listened yet:

A-Plus: No Madam. Due to pressure from ABOVE, I pulled it down.

Police Officer: Did you accuse them as thieves, cos is in the report

A Plus: No, I only said they are CORRUPT
Police Officer: Then please you have to come back and remove that from your report because we have confirmed your allegation that they are corrupt. I went to Korle-Bu but I have not been feeling well ever since I came back from there.

A-Plus: Oh Sorry Madam
Police Officer: Not sick as in illness o! I mean what I saw made me sick. Corruption paaaa but you know they are your people so we have to manage it.

Mr. President how did we get here? The name of the CID officer is interesting. She is the deputy director of the CID and her name is ACP Mrs Maame Yaa Tiwaa Addo Danquah. Hmmmm.! She was promoted as part of the family and friends set up and definitely she has to cover your shame. It is too bad Mr. President. From the name she should be your in-law or something. I am aware her report was sent to you and you gloated over her cooked exoneration of those criminals. Sorry Sir the ACP Mrs Maame Yaa Tiwaa Addo Danquah must be booted out of the sensitive office she holds incompetently in the police service; she is not serving the state. Period!

But I am also wondering, are we safe? You preached against corruption to gain the trust of Ghanaians and the mantle of leadership thereof so why the sudden turn of events? Why have you reduced the fight against corruption to only the MICROPHONE? Boakye Agyarko was covered up when he bribed members of the appointment committee of Parliament and was exposed by Hon. Mahama Ayariga; Member of Parliament for Bawku Central Constituency. Alfred Obeng Boateng of BOST sold 5million litres of intentionally contaminated fuel to his own unregistered company which was unlicensed; the information was leaked and Ghanaians demanded justice but he was covered up. You yourself and the Energy Minister scuttled the work of the committee set up to investigate him. When he threatened to collect from you his contribution towards your campaign you had to jump publicly to his defence. Wooow!

Now your two Deputy Chiefs of Staff got themselves involved in corruption of which Kwame A-Plus blew the whistle but they were covered up. Unfortunately, the cork didn’t sink in the last case. Mr. President why have you chosen to run a United Government of Corruption and Cover-ups (UGCC)? We are now a laughing stock in the international community. At what point did Ghana deserve that miserable treatment?

Corruption has assumed disproportionate heights ever since you became president. The masses are terribly suffering from the economic hardship your government imposed on them. Affording 3 meals daily is hardly attainable yet your appointees continue to amass wealth illegally and all you do is shield them? The fuel prices that you trumpeted you would reduce are rather skyrocketing? Is this not 419?

Just a few weeks ago a mother from Zebila in the Upper East Region lost her baby because she couldn't afford a medical bill of GHS10, an indication that the rate of poverty in Ghana currently is unprecedented. Very sad phenomenon though. These are people who need equitable distribution of our national cake.

Enough of your rhetoric, we want action not words. Please walk the talk! You and your appointees are also Ghanaian citizens; we won’t sit aloof for the embezzlement to continue.

All your government knows best is intimidation but don't forget intimidation begets bold resistance. Gagging the people only means we are on the path to recovery. Our national anthem ended with these words:

" and help us to resist oppressors rule, with all our will and might forevermore". We will take courage from there!

Ghana is bleeding, so, so, so despicably. It is a pity.

I respectfully await your swift response. Unlike in the William Quaittoo’s case please speak on this matter.