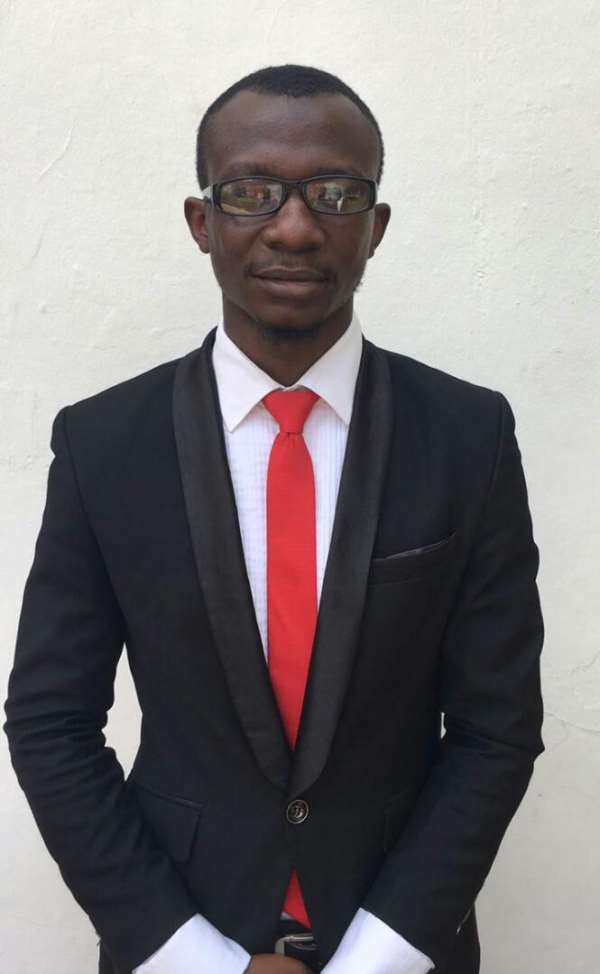 Today is our Founder's day and nothing can distort that. In discussing this, many men and women come to mind on this day and under this circumstance, but one man stands tall among the rest, thus, Osagyefo Dr Kwame Nkrumah (Africa's Great Son).

It is on this fact that I, with much profundity, want to discuss Osagyefo Dr Kwame Nkrumah in the context of the struggle for emancipation from foreign rule and imperialism and how the people Nkrumah termed as traitors and agents of neocolonialism think of him.

Dr Kwame Nkrumah has been castigated and denigrated by his opponents and critics over the period, and the descendants of those people are still, today vilifying Dr Kwame Nkrumah.

They have succeeded in painting Kwame Nkrumah as a ruthless dictator and a mindless monster who was arresting his opponents without trials.

To them, it is either JB Danquah or Kofi Abrefa Busia or Obetsebi Lamptey or no one else.

To them, those listed above were the real heroes of Ghana.

Some months ago, I read some comments by some media cabal that sought to suggest that it was JB Danquah who formed the UGCC and brought Kwame Nkrumah on board, therefore, 4th August should be the founders' day instead of the founder's day (Nkrumah's birthday). Ridiculous!!!

That narrative is not only a travesty of history and distortion of facts, but also, it was advanced with a clear demonstration of a lack of respect for history!!!

Listen to me carefully because I am going to say certain things here!

The struggle against imperialism started way back before the formation of UGCC.

The Fante Confederacy, the Yaa Asantewaa War, the Aborigines' Rights Protection Society, the John Mensah Sarbah's struggle, the struggle of the King of Sankana who struggled against slavery by defeating Sammory.

The UGCC came to continue the struggles of these people.

It is on record that, it was George Paa Grant who single handedly formed the UGCC and invited JB Danquah, Arko Agyei and people like RS Blay and William Awoonor.

He used his own money to pay the transport fare for JB Danquah and the rest, whenever they went for UGCC meetings.

Later on, Paa Grant needed to transform the party from the docile state to a mass movement to accelerate the pace for the struggle for independence.

“In the United States of America, he came across writings of George Padmore and Co, who were in the Pan-African Movement, W.E.B Du Bios and all. And eventually he linked up with them in Manchester, United Kingdom, where they organized the fifth Pan- African Congress and they decided to accelerate the struggle for the liberation of Africa” ~ Mr. Kwesi Pratt Jnr.

For this reason, Paa Grant ordered that Kwame Nkrumah be invited after Arko Adjei refused the portfolio as the General Secretary. In fact, it was Ako Adjei who recommended Nkrumah rather because in his estimation, Nkrumah qualified for the position as the General Secretary. Thereafter, Nkrumah became the General Secretary to the UGCC on 10th December, 1947. When Nkrumah assumed the position, he brought on board, the Women's Wing, the Youth Wing, the Students' Wing, the Chiefs, the Farmers, the Market Women etc to transform the UGCC which was only an elitists' tea club to a mass movement to accelerate the pace for the struggle for emancipation.

Therefore, JB Danquah, Kwame Nkrumah and others were all invited by George Paa Grant who used his own resources and money to fund the party.

It is important to note that, Nkrumah broke away from the UGCC to form his own CPP because of the backward thinking attitude of JB Danquah and co. Nkrumah realised that JB Danquah and co. have already had what they wanted (money, education, popularity) and were reluctant in the fight against imperialism. In fact, JB Danquah and co. reneged.

Therefore, Nkrumah left the UGCC with the support of the Youth Wing of the UGCC made up of loyal people like Kofi Agbeli Gbedemah, Kofi Baako (Kweku Baako's father), Dzenkle Dzewu, Krobo Edusei, Saki Scheck and Kojo Botsio to form the CPP on 12th June, 1949 and spear headed the fight and struggle against imperialism and foreign rule.

Therefore, the history we are told today is not a proper history to be repeated.

JB Danquah was not that powerful as we are made to believe today.

Why? Even in a contest in Kyebi (his own backyard) with his own nephew, Aaron Ofori-Atta, Dr JB Danquah lost woefully albeit the Chiefs of Akyem Abuakwa had decreed that everybody should vote for JB Danquah.

After losing several contests in Kyebi, JB Danquah eventually went to the Legislative Assembly as a nominee of the Chiefs of Abuakwa, but not through a popular election. He never won any election.

WHY THEY ACCUSE NKRUMAH OF DICTATORSHIP
In 1951, 1954 and 1956, Nkrumah won the first, second and third general elections respectively and successively. After those years, the opposition to Nkrumah assigned one Seth Ametowe to assassinate Nkrumah in 1964.

In 1963, there was the La-Bawalashi Coup plot in which JB Danquah was referenced.

At approximately 1 pm, Nkrumah had come out of the Flagstaff House and was going for his lunch. History has it that Set Ametowe shot four rounds of bullets at Nkrumah. His personal bodyguard and others died saving him.

Isochronously, JB Danquah was caught and arrested around GBC with a well prepared and signed document to address to the nation.

What does this mean? Which country would have ignored that?

What offense did Nkrumah commit by making sure that JB Danquah was arrested for engaging in such atrocities against a democratically elected president and his government? He didn't arrest him because he hated him.

If Nkrumah never liked JB Danquah, he wouldn't have appointed JB Danquah as the then Chairman for the Council For Scientific And Industrial Research, Director of Legal Education and a member of the Ghana Arts and Academy of Science, after all the atrocities that were committed against him.

After JB Danquah was detained, over some time, JB Danquah's wife (Madam Mabel Dove Danquah) wrote series of apologetic letters to Nkrumah to release her husband (JB) on compassionate grounds.

Why do you think the wife would want her husband to be released on compassionate grounds?

Because she knew without compassion from Nkrumah, there was no way JB Danquah was going to come out after that atrocious incident perpetrated by JB Danquah.

It is significant to note that Nkrumah was touched by the letters Madam Mabel wrote and minuted on one of the letters to release JB Danquah.

The Secretary to the Cabinet (Mr Eric Otu) at the time received the order and thought it was late because it was around 5 pm and decided to work on it the following day.

How would Nkrumah be so vicious and monster to allow JB Danquah to die in prison, having have ordered his release the previous day?

Yet when you hear them speak it is as if Nkrumah never considered JB Danquah's case.

Few months ago, the NPP celebrated the death of Obetsebi Lamptey to further deepen the dent on Nkrumah's image as a monster and a brutal dictator.

When these Danquah-Busia elements speak, it is as if Nkrumah arrested Obetsebi Lamptey and put him in prison without trial.

I have come to believe that history does not hide anything.

History has it that Nkrumah never convicted Sir Obetsebi Lamptey. In plane facts, Nkrumah had nothing to do with that.

The truth is Obetsebi Lamptey was properly tried and was convicted by a competent court of jurisdiction.

These judges sat on the case and came to the conclusion that Obetsebi Lamptey was a leader of a terrorist cell and needed to be jailed.

So it was President Nana Addo Danquah Akuffo Addo's own father who jailed Obetsebi Lamptey, not Kwame Nkrumah.

This bizarre imposition of JB Danquah on Ghanaians led a prominent Chief of Akyem Abuakwa to say that the Premier University of Ghana-Legon should be named after JB Danquah. This statement from the said Chief could only come out from him as a result of a clear demonstration of lack of respect for history.

Now again, listen to me carefully, when Nkrumah won the first general election in 1951, his Internal Self Rule government instituted the Local Council Ordinance Bill and the Cocoa Marketing Board.

It was the LCOB and the CMB which provided the needed and required revenue and resourses to achieve Nkrumah's first five-year development plan which included the construction of the University of Ghana-Legon, the Volta River Project, Tema Habour and City, the Adomi Bridge, the Komfo Anokye Hospital, the Democratization of Education and the Medical School.

You would recall that when the Big Six were arrested and detained after the Riot of 1948 that was sparked by the open assassination of Sergeant Adjetey, Sergeant Attipoe and Private Lamptey, when it mattered the most, five of the Big Six including JB Danquah told the imperialists that they knew nothing about the Riot of 1948.

It was only Osagyefo Kwame Nkrumah who stood by his conviction and defended the Riot by pointing out to them that it was illegal to kill those Ex-Service men who were peacefully asking for what was promised to them before they fought in the World War II. He believed in the Riot because he had the conviction that it was in solidarity to those innocent Ex-Service Men who were shot and killed by heart.

How could JB Danquah be considered as a 'hero' in Ghanaian political history? On what basis?

After 1969, Dr Kofi Abrefa Busia passed a resolution in parliament to make it illegal to see Nkrumah's books, pictures and his effigies were set ablazed. That didn't work. So I say Nkrumah never dies. Therefore, this attempt at denigrating Nkrumah is an exercise in vanity and futility because the history is documented.

It was only the CPP that completed the last lapse in the struggle for emancipation against imperialism and foreign rule.

Make no mistake, Nkrumah single handedly founded Ghana after five of the Big Six including JB Danquah contrivedly deserted and disowned him.

There were people like Krobo Edusei, KA Gbedemah, Kofi Baako, Saki Scheck, Tawiah Adamafio, Dzenkle Dzewu, Sonny Provencaal and others who stood shoulder-to-shoulder by Nkrumah. They didn't desert him. Some of them were on the platform with Nkrumah at the Old Accra Polo ground to declare the Independence of Ghana on 6th March, 1957.

Where were the rest of the Big Six including JB Danquah?

The BBC's survey showed that Nkrumah is the "GREATEST SON OF AFRICA" of the millennium.

The A U headquarters in Addis Ababa has no statue of any African leader save the statue of Kwame Nkrumah. Around the world, Africa to be precise, different monumental structures have been named after Kwame Nkrumah. This shows the 'height' and 'magnitude' of the man Kwame Nkrumah in the World's political history.

In concluding, today is FOUNDER'S DAY (Kwame Nkrumah's birthday), but not FOUNDERS' DAY.

Indeed, some people have no shame!
There are a lot to be said, but for the purpose of this article, I leave it here and I happily say, Happy Founder's Day to you all.

2. THE CONTRIBUTION OF DR. KWAME NKRUMAH TO THE STRUGGLE AGAINST IMPERIALISM. https://consciencism.wordpress.com/2012/09/25/the-contribution-of-dr-kwame-nkrumah-to-the-struggle-against-imperialism-in-the-eyes-of-a-contemporary-cuban-international-revolutionary

3. Fight Back: A Response To Anti-Nkrumah Provocations