Distinguished Services to Humanism Award: To All Humanists at Risk Worldwide 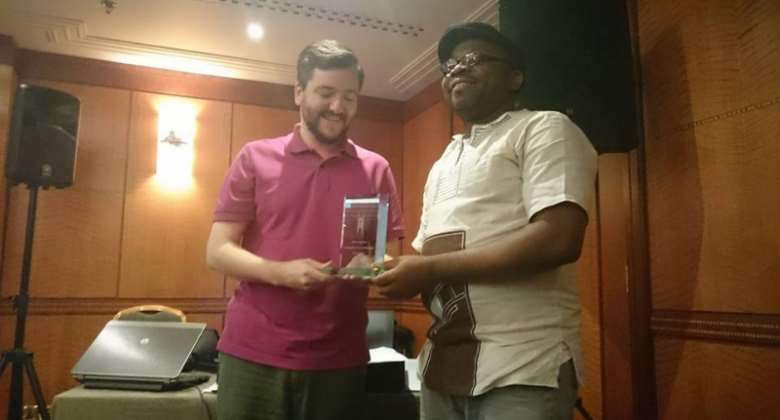 Thank you the International Humanist and Ethical Union (IHEU) for selecting me as the recipient of the Distinguished Services to Humanism Award for 2017. I dedicate this award to all humanists at risk around the globe. I feel humbled by this honour, although I must acknowledge that if one goes through the list of past recipients, it is obvious that the contributions that I have made to international humanism and to organized humanism are quite small. How would anyone compare my contributions to those of the likes of American Philosopher Corliss Lamont, Indian Humanists Indumati Parikh and Abe Solomon, British Humanists, David Pollock, Robbi Robson and my friend Josh Kutchinsky and past IHEU presidents Roy Brown and Sonja Eggerickx?

There is no doubt that I have eventually found myself in the midst of humanist giants, and that is humbling.

I must state that this award was not actually meant for me. This award rather speaks to the vision that has been there since the founding of IHEU. This is the vision that drove British Humanist Harold Blackham and other humanist delegates from across the world to start the IHEU in Amsterdam in 1952. This vision has been the main pillar of international humanism till date-that is the refusal to accept humanism as it is and to try and organize, and mobilize to realize humanism as it should be.

It was the same reason that led me to start the Nigerian Humanist Movement in 1996. I was not born a humanist. In fact, I trained to become a priest, not a humanist leader. I had no experience in organized humanism. However, I knew that there was something missing in humanism as it was then. And I did the much I could to supply the missing link and helped move Nigerian humanism towards what humanism should be!

Luckily the movement in Nigeria has survived, and has remained on course for 20 years and still counting. In fact, we are beginning to see strong signs of humanism as it should be. We have witnessed the emergence of humanist groups and activists who are working and campaigning vigorously to promote an effective alternative to dogmatic religions and supernatural faiths. Two of these organisations, The Humanist Assembly of Lagos and the Atheist Society of Nigeria are now registered with the government!

In fact, recently we have seen a wave of humanism-as-it-should-be silently sweeping across Ghana, Kenya, Uganda, Malawi, Zambia, Zimbabwe, Botswana and South Africa.

This same vision led me to contact IHEU in the 90s and to attend the World Humanist Congress in Mumbai in 1999 where I addressed for the first time an IHEU event. I joined the IHEU Growth and Development Committee and later served as one of the representatives in Africa and at the African Commission on Human and People Rights and used the position to raise humanist issues for the first time with state parties in the region. I will never forget the deep feeling I had that day I addressed for the first time the African Commission on Human and People's Rights. I felt like: Yes! That is humanism as it should be!

Let us also not forget that the quest for humanism as it should be led the then IHEU President, Norwegian Humanist Levi Fragell to visit Nigeria, Ghana, and Uganda in 2002 This same vision led IHEU to organize its first General Assembly in Africa in 2004 and sent a strong delegation that included then IHEU director, Babu Gogineni, to the humanist conference in Ikenne in Nigeria, the same year!

IHEU appointed two representatives in the region and secured an NGO status at the African Commission on Human and People’s Rights.

In recent years we have witnessed other changes within the IHEU. These developments give me hope for the future.

For instance, we now have IHEU Board representatives from Asia and Africa. That gives me hope. Since 2012, IHEU has been publishing The Freedom of Thought Report that documents the discrimination and persecution against non-religious people in countries around the world including my own country, Nigeria. That gives many humanists across world hope. In fact, the latest IHEU campaign to support humanists at risk was a masterstroke and again that gives me hope.

So keep moving in the direction of humanism as it should be, IHEU! And be assured of my continued support and contribution to your work and programs for the rest of my active years.

Thank you for this award!

More Feature Article
ModernGhana Links
Ghana’s Herbal Market: Another ‘E-Levy’?
A Good Leader Remembers Those Who Help Him
ECG to urgently attend a repeatedly reported but ignored electrical fault on the compound of JULIKART pub/hotel in Mallam-Accra
Atta-Mills Looted Ghana Raw with Woyome and Kwame Gonja
Does Anyone Still Remember "Empaah-Day"?
Kutu Acheampong Was an Energy-Supply Visionary Where Mahama Was a Wuss
Rehabilitative care and unemployment
Re: Herbal Medicines Pose Dangers to Public ……..Health Experts Cautions
Still on Osun governorship election
TOP STORIES