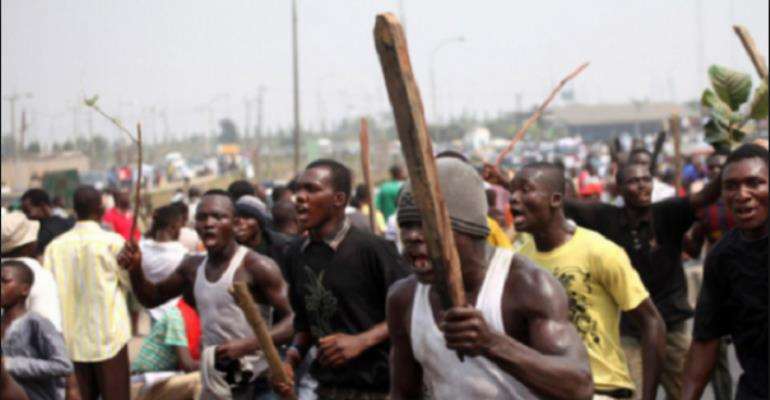 It was 24th June, 2014, I went to Circle with a friend of mine. He bought a brand new Samsung Galaxy Ace phone at one of the numerous phone outlets( we would later find out that the phone was not genuine). We then made for the TipToe Lane to buy some phone accessories.

My friend, well-aware of the security situation of the area, removed his new phone and put it in one of the front pocket of his trousers. “You have to be careful ooo. This place...they will take your phone right now. Fast.” This warning ensured that I pushed my phone further down my breast pocket and held it as I walked. Having come from a place where taking this extreme precaution was rare, I guess my awkward movements gave me away as new in town.

In a split second, I was pushed and one of my legs violently kicked against the other. As I tried frantically to not fall, I absentmindedly held the shirt of a young man. It was to no avail. I fell face down, my hands preventing the whole of my torso from touching the ground. My friend helped me and I quickly rose to my feet only to find myself surrounded by four evil-looking young men who were unmistakably high on wee. My phone was gone!

The guy who had pushed me ( I recognised him because first, I had seen him at the shop and second,I had seen him turn and look at me as he walked pass me) asked me why I was obstructing movement, his hefty hand ready to slap me. I explained that someone had pushed me and apologised. At this point a nosy trader asked me whether someone had snatched my phone. I did not answer her.The four furious-looking guys hurled choice insults at me and barked instructions at me. The ordered me to wake up to the fact that I was in Accra and walk like a civilised person. I thanked them and walked away with my friend.

The nosy trader asked me again whether or not my phone had been snatched from me. I said yes. She uttered a good number of “ohs”, each succeeding oh conveying more pity than the previous. She then revealed to me that those who had wanted to beat me were the same people who had taken the phone. By this time the gang had crossed the road to the other side.

My friend was deeply hurt. For me, my relief at not being lynched smothered the hurt caused by having my first smartphone phone forcibly taken from me. But it was back at Mempeasem later that evening that the full impact of what would have happened dawned on me:

If I had raised an alarm, the gang would have accused me of rather being the thief, and would have pounced on me; the nosy trader would have kept quiet, so as not to be victimised later; my friend would have tried valiantly to rescue me and would have likely rushed to the nearby police station; others would have promptly put their cameras on in order to capture the incident; then traditionalists, atheists, agnostics, Bible-believing Christians and pious muslims would have surrounded me and hit me with all the viciousness they could have mustered; others would have hurled all sorts of dangerous objects at me; yet others would have cursed me; another group would have walked pass, afraid of intervening or joining the slaughter; I would have been pounded to a pulp and the holiest of the group would have ensured I was dead by smashing my head with a rock or block; the Devil’s incarnate himself or herself would have generously supplied a gallon of quality petrol and sprinkled the contents of the gallon expertly and thoroughly on me; one of his compatriots from the Hell would have set me alight.

As I burnt, one of the senior managers of Hell would have brought a tyre and stoked the fire; some sanctimonious passers-by would have expressed subdued disgust at the action; the murderous gang would have finally begun to disperse. Only a handful would have been genuinely horrified.

My friend would have returned to my charred body. And the incident would have most generously been shared on social media by insensitive persons keen on being first to share blood-curdling news…

The fact about MOB INJUSTICE is that we are all at great risk. We need to bestir ourselves to fight it. We must consciously, consciously, avoid taking part or inciting others to do it or, worse of all, JUSTIFYING it. A way to start is to put pressure on our security agencies and on our grossly irresponsible political class to allow for the proper prosecution of suspected criminals.

#No to Mob Injustice!