The golden rule: Do unto others only what you will have them do unto you 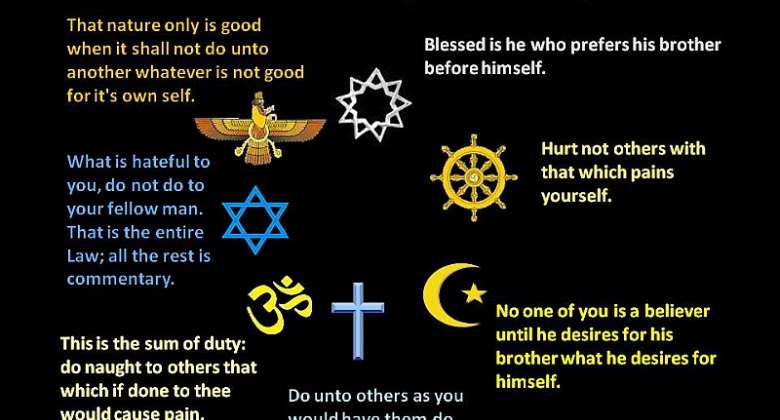 Just the use of the word "SUBSTANDARD" has provoked the hell out of a whole party.The party has become so uncomfortable and uneasy like a fish let out of water.(That's the power of words, in fact,political wording).

They are issuing official statements here and there demanding for an official apology from Joy FM and the host Sampson Lardi Ayenini.

Communicators and social media commentators and infact,attention seekers of the party have taken the person of the humble servant of our dear nation(Sampson) to the cleaners and market, probably for sale at a very cheap price.

Is it now a crime to hail from a certain part of this country,countrymen? One of their communicators ignorantly wrote, "...now, he never thought where he came from he would ever get that big opportunity to be rubbing shoulders with the BIG NAMES ON RADIO AND ON GH POLITICAL SPACE."

Where does he hail from?Yes, the Northern Part of Ghana,Bolgatanga specifically!And what has that got to do with the work that he does?In your own words, does that mean people from that part of the country cannot "rub shoulders" with others in the political and journalistic space?

I won't be the one to remind you that the current fine vice president is rubbing shoulders with all the big names and he hails from the north.The immediate past president His excellency John Dramani Mahama hails from the north.But he ruled you for close to 6 years.Take this or feel free to burn the sea...Manasseh Azuri Awuni hails from the north,in fact, the same region as Sampson,and they are all big brains when it comes to Journalism in Ghana.So what is the point here!

Now to the substance of the matter,today, the use of "Substandard" we are made to believe is an insult to the NPP and the said communicators.

"The poor boy from Bole" was accused of appointing amateurs as deputy ministers and ministers alike.These honourable men were described as "babies with sharp teeth."(Credit to former president Jerry John Rawlings).They were insulted,bastardized and reduced to nothing.

The former president was even pressed to the extent that he had to reply by saying that such critics have come no where near the presidency."You don't know what it takes to be president..."He charged.

That is the power of words.You never saw anything wrong when you were trying to run down a whole president and his appointees just because of the thirst for power.(The golden rule is applicable).

Today, it's a journalist not a politician against just two of your communicators and hell is breaking loose in this country.

Let the young man be.Sampson Lardi and Joy FM do not owe the NPP or its communicators any apology.After all,it's a democracy .It's freedom of speech.And just like Manasseh echoed,Journalist have the right and must begin to dictate the pace.

Sampson Lardi and Joy FM must be bold and stand on principle.They should never render any apology to the NPP or its communicators . It's a matter of principle and not pity.

Happy Easter and May God Bless us all with renew hearts and minds to watch our words and put Ghana first.