Of Samira Bawumia's Outfit At The Inauguration 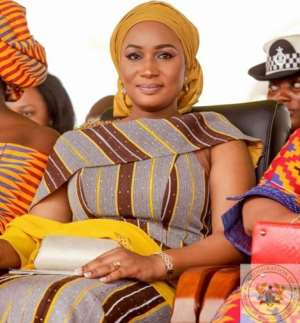 I am always afraid to mount the moral high ground and preach about morality because I am not perfect. As a matter of fact, no one is perfect. That means we are all bunch of apple eating imperfects. So, because I am imperfect and you're imperfect, we should all leave the truth to silence? No! There is nothing wrong in sincerely pointing out the imperfections of others. Even Jesus Christ saw something in Mary Magdalene with her imperfections.

I am a conscientious feminist. I celebrate and worship women who are making giant strides in their deeds and decisions to reaching higher heights. I completely share in the glory of Samira Bawumia and I would any day reference her as a figure of emulation to young women especially from the Zongo and Muslim communities. Therefore, I would not be happy to see her commit avoidable blunders that will incapacitate me from defending or referencing her.

Whether you like it or not, Samira rise to fame came from her husband's political pursuits and her own knack and versatility to run down in Ghanaians thought-provoking campaign messages. Her "We Will Remember" speech, by unanimous decision in the Court of Public Opinion was considered as the most powerful campaign speech since Thatcher left office many decades ago. Some unapologetic feminists even claimed that her speech outweighed the combined political speeches of Amissah Arthur.

Today, Samira has risen to the ceremonial high office of Second Lady of Ghana. No matter your level of dishonesty, you can't afford to agree with me that she got thus far under the catalyst of "Islam", "Muslim" and "Quran". Her husband is not exempted from this belief. So, it would be inappropriate for her to entertain certain decisions that would rather cast aspersions on the ideologies that help her course.

The inauguration ceremony was her first appearance in huge public event that trended beyond the bothers of Ghana. I swear Heavens, I was surprised by her appearance. I thought she would've come out in a way that projects Islam that contributed to her presence at the ceremony as a red carpet guest.

Hey! I am not a religious extremist. I am not suggesting that she should have worn a hijab or a long dress to cover her hair to toe with black socks and white gloves like a ninja. I just felt she could've appeared more representative of a bigger group, Muslims.

The veil, is a marked symbol of marriage and Islam. In gatherings of this magnitude, married or Muslim women are distinguished by their veils. The veil is a powerful costume that conveys only one or two message(s) - married or Muslim or both. An addition of a veil on her head or neck for the ceremony could foil all these trolls on her. Her outfit was a simple wardrobe blunder oblivious of where she is coming from and believes in. Samira is a young adorable woman. Her youthful exuberance or passion for fashion may probably make her trend in the news and social media for all the avoidable wrong reasons.

I've one request from Samira Bawumia and her handlers. In order to take away the breath of spin doctors, she must at all times be seen with the Symbol Of Believing Muslim - the veil. Even if she is in her bikini. Nnabi.

I just look forward to not asking "kaman how?" questions in her subsequent public appearances.

My name is Hanan-Confidence Abdul, a Charlotte Osei crush, sapiosexual and conscientious feminist.